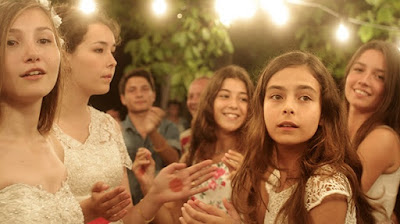 The change, when it happens, is instant. One moment life is one way and in the next moment everything is different, never to be the same again. Such is the situation for the five sisters in Deniz Gamze Erguven's Mustang, one of last year's nominees for the Oscar for Best Foreign Language Film and a powerful, deeply-felt film about young women growing up in circumstances designed to curtail any social power they might have and any sense of agency over themselves or their lives. It's an absolutely stellar film about how patriarchy works, about the hypocrisy and corruption that resides at the core of such a system, and about the minor and major ways that it can be rebelled against. It's a sad and maddening film in many ways, but in other ways it's also surprisingly funny and, ultimately, hopeful.

The five sisters are Sonay (İlayda Akdoğan), Selma (Tuğba Sunguroğlu), Ece (Elit İşcan), Nur (Doğa Doğuşlu), and Lale (Güneş Şensoy), orphaned for about a decade at the time the film begins and living in the care of their grandmother (Nihal Koldaş), with their uncle Erol (Ayberk Pekcan) as the head of their household. As the film opens, they're living a happy, carefree life but everything changes when they decide to walk home from school and take a detour to the beach, where they frolic with some classmates, some of them boys. Word quickly spreads through their village, humiliating Erol, who believes that their actions have dishonored the family. Together, Erol and his mother decide that the girls will be placed under house arrest, forbidden from leaving and having any contact with anyone outside of the family, except for one occasion when they're taken to the hospital so that the three eldest girls - Sonay, Selma, and Ece - can undergo "virginity tests" to ensure that they're still viable candidates for marriage.

Locked in the house, the girls spend their days being given lessons on how to be proper wives and plotting ways to maintain their identities and to escape. When the news gets out that the local soccer team will be playing a game where men will be banned as spectators due to misbehavior at the last game, the girls make a plan to sneak out and join the rest of the girls in the village in going to the game. They succeed in getting out and getting the to game, but fail to consider that their images might end up captured on the television broadcast. In one of the film's funniest sequences, their aunt catches sight of them on TV and runs around covering for them before Erol can see them, first by cutting off the power in the house, and then by cutting off power to the entire village just to be sure. The happiness that the girls feel at this evening of freedom is short-lived, however, as afterwards their grandmother begins unfolding her plan to marry them off one by one, with the exception (at first) of Nur and Lale because they're too young.

Written by Erguven and Alice Winocour, part of the reason that Mustang works as effectively as it does and touches as deeply as it does is that during its first act the girls are virtually indistinguishable from each other. They're this gaggle of energetic, restless girls, defined as a group rather than as individuals. It's later on that they begin to come into their own as characters and because of this storytelling strategy, the moment when Lale (who acts as the film's narrator) declares that what we're seeing is the last time they would all be together is especially heartbreaking (and that's before we even learn why they'll never be together again). Up until this point, they've survived as they have because they've functioned as a team and even though all of their freedoms have been curtailed and their home has literally been turned into a prison with bars and locks over everything, they remain spirited throughout, drawing strength from each other; it's only after their bond starts to be broken through separation that those who remain in the home begin to crack under the pressure.

Being a film about young women who have lost the privilege of being in control of their own fate and are subjected both to humiliating invasions of their bodily autonomy and to abuse, Mustang is often bleak, but it's never unrelentingly so. The ways, little and small, that the girls find to strike back at the oppression they've been subjected to - including the climactic sequence when they use the very things used to imprison them to their advantage - make this a story of survival rather than victimization, and the performances by the five actresses are vibrant and compelling. This is particularly true of the performance of Şensoy, the youngest cast member, who delivers one of those child performances that manages to be precocious without being overly "cute" and is as much a testament to Erguven's abilities as a director as Şensoy's natural abilities as an actress. Mustang is a terrifically acted film and beautifully unfolded story, making for a perfectly compelling and engrossing film.
Posted by Norma Desmond at 8:00 AM