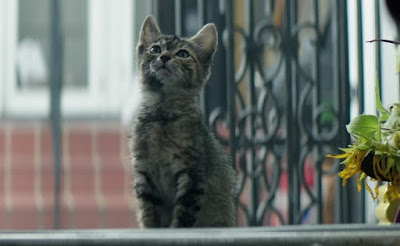 Of the two major motion pictures about cats to come out in the last few months (the other, of course, being the "what-the-fuck-even-is-this" Nine Lives), Keanu is clearly the better choice. I mean, he only gets a celebrity voiceover for a brief moment during the course of his film, but that kitten is cute as hell. I totally get why everyone in this movie is willing to put their lives at risk in order to claim him as their own. If you're a fan of the now sadly defunct Key & Peele, then there will be a lot in Keanu that you'll enjoy. You might enjoy it more as a slightly longer than average sketch, rather than a full length feature, though. The premise of the film is pretty thin, even for a relatively short feature, and as a result the story tends to sag in places, but overall it's funny enough for a silly little diversion of a film.

Keanu is a kitten of many identities, beginning his life as Iglesias, so-named by his cartel member owner. When the cartel is attacked by a pair of assassins known as the Allentown Boys, Iglesias' owner is killed and the assassins take a liking to the kitten but lose him when they become momentarily distracted by the arrival of the police. Iglesias takes off, wandering the streets for some time before finally ending up on the doorstep of Rell (Jordan Peele), whose depression over being dumped by his girlfriend is instantly lifted upon making the acquaintance of the kitten, whom he names Keanu. Keanu quickly becomes the center of Rell's world and Rell fills his house with cat accessories and spends his time staging and photographing Keanu recreating film scenes for a calendar (he has no intention of actually selling the calendar, though, which is crazy because that would legit make millions). His cousin Clarence (Keegan-Michael Key) is just happy that Rell is out of his funk, but when they go out for a boys night while Clarence's wife and daughter are away, Rell's house is broken into and Keanu is stolen, leaving him completely devastated.

Driven by grief, Rell quickly puts the pieces together and figures out that it's his neighbor/pot dealer Hulka (Will Forte) who was the actual target and puts the screws to him until he reveals who the probable perpetrator is. With that information in hand Rell and a very reluctant Clarence head to a strip club to look for a drug dealer named Cheddar (Method Man), who is in fact in possession of Keanu (whom he has renamed New Jack), and mistakes them for the Allentown Boys. After some discussion, the three come to an agreement that Cheddar will give up New Jack, but only after the "Allentown Boys" act as advisers to his own rookie crew - consisting of Hi-C (Tiffany Haddish), Trunk (Darrell Britt-Gibson), Bud (Jason Mitchell), and Stitches (Jamar Malachi Neighbors) - on a drug run. They agree and though they struggle to maintain the gangster personas they've adopted, they manage to pull off the job (sort of) and in the process Clarence becomes increasingly invested in his bad ass alter ego. Rell, meanwhile, realizes that they've gotten in over their heads and just wants to get his kitten back and go - but Cheddar has other ideas.

How much you enjoy Keanu will depend on how much you can invest in the idea that a whole bunch of people would be willing to kill and die over a kitten, even one as heart-meltingly adorable as Keanu. It will also depend on how funny you find the way that Key and Peele play on the notion of identity and the construction thereof, whether you see the humor in Clarence convincing a bunch of hardened gangsters that George Michael is black and then getting them to sing along with him to a couple of Michael's greatest hits, and how much you might enjoy seeing Anna Faris gamely playing herself as a katana wielding coke fiend. I found all of these things delightful (though the sequence with Faris goes on a bit longer than it actually needs to) in addition to being impressed by the film's ability to take such a light, silly tone while at the same time delivering a story which ends by recognizing the consequences of all the very illegal shit that Rell and Clarence end up doing to get Keanu back.

As enjoyable as parts of Keanu are, however, it's never quite clever or funny enough for long enough at a stretch to cover up the fact that it doesn't have all that much going on in terms of its story. Although it jazzes things up by throwing in a gun fight here and there, it sometimes suffers from low energy and scenes that feel like they're only there to pad out the running time a bit. Keanu also commits the cinematic crime of having Nia Long in its cast but featuring her in a bare minimum of scenes. Still, Keanu is a mostly enjoyable movie that never takes itself too seriously and makes good use of the comic chemistry between its two leads.
Posted by Norma Desmond at 8:00 AM