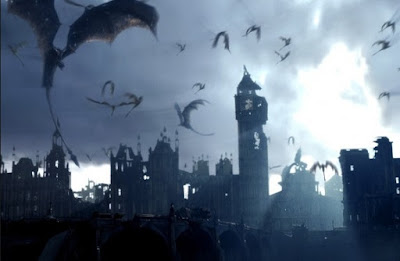 Sometimes a movie (or any work of art, really) is going to fail to find its audience no matter what. That isn't necessarily a reflection of how good or bad it is - there are good movies that make money and bad movies that make money, and there are good movies that don't make money and bad movies that don't make money - but more a reflection of how in or out of step it is with where popular culture is at in that particular moment of time. A film's success has as much to do with the timing of its release as with its actual content, which is a roundabout way of saying that I wonder if Reign of Fire might have actually become a hit if it had been made for this summer instead of the summer of 2002. Right off the bat it would get points for originality - which was not much of a factor in the summer of 2002, which had a release slate with a positively restrained number of sequels and remakes/reboots, but was made up largely of properties that were either wholly original or adaptations that were seeing the screen for the first time - and then you factor in that it stars Christian Bale and Matthew McConaughey, both of whom are more popular now than they were in 2002. Then consider how thoroughly pop culture has embraced post-apocalyptic stories in the last decade, and give the film a couple of extra points for how the popularity of Game of Thrones, Godzilla, and Jurassic World might make audiences more open-minded to a film about dragons, and I think you might have at least a modest hit. Would it deserve to be a hit? Well, that's another question entirely.

Reign of Fire doesn't explicitly specify when its story begins, but based on the fact that the bulk of the story takes place in 2020 with a protagonist played by Bale, I'm going to assume that the prologue takes place in 2002. At that point the hero, Quinn, is just a child whose mother is the chief of a construction crew working on the London underground that accidentally uncovers a hibernating dragon. In the brisk exposition dump that follows, we learn that scientists soon began to uncover evidence that dragons were responsible for the extinction of the dinosaurs as well as for the ice age (brought on by the amount of ash and smoke they send into the atmosphere), and that as more dragons awoke from their long slumber to begin feeding on a now repopulated earth, the world responded with a full-scale military attack on them, including a nuclear strike in 2010. By 2020 humanity is on the verge of extinction and a now grown Quinn is the leader of a small community that has taken shelter in a castle. Having had no contact with any other community of survivors in some time, they believe that they might be all that's left until one day a convoy of tanks appears on the horizon, followed by a helicopter. The militarized group is led by Van Zan (McConaughey), who reveals that he and his team have developed a system for hunting and killing dragons. Although Quinn resists teaming up with Van Zan at first, eventually he comes around so that they can conquer their common foe.

Insofar as it's not based on any pre-existing property, Reign of Fire is an original story, though it borrows from WWII in order to give itself a framework. You've got a years-long world-wide conflict against a savage, relentless enemy bent on eradicating humanity, a circumstance where all of continental Europe has fallen and only the UK has managed to hold out even as parts of it are reduced to rubble and fire as a result from attack from above, and then the arrival of American troops (of whom one character remarks, "Only one thing worse than a dragon. Americans.") to bring about the change in the course of the war (aided by the fact that the enemy has reached the point where its own access to resources has started to dwindle, leaving them weakened and destabilized). This isn't to say that Reign of Fire actually functions, or even tries to function, as an allegory for WWII, just that it's using imagery that hearkens to familiar images from the past as a sort of visual and narrative shorthand that allows it to deal with the world building aspect of its setting in an economical fashion so that it can spend more time on the actual story. Which is a smart strategy but ultimately wasted because the story of Reign of Fire makes no goddamn sense.

All stories, to some degree or another, require some work on the part of the audience by way of suspension of disbelief. In order to invest in a narrative, you have to be willing to let some things go, be it a plot hole or a leap in logic or, if it's a story based on true events, an alteration to the story that makes it more streamlined or the creation of a composite character to represent several actual people. But there's a difference between suspension of disbelief - like, say, buying that a decade after the fall of society those who remain still have fuel for those trucks and that helicopter - and just plain stupidity. Just plain stupid is the conflict between Quinn and Van Zan, which comes down to Van Zan's belief that of all the dragons on Earth, only one of them is male, and that if they kill him then they'll kill the dragons' ability to reproduce, and Quinn's belief that if they go looking for the male dragon, then it will be able to find the castle and destroy the community living there. Why does Van Zan think there's only one male dragon? Because he and his group have only ever found female dragons (never mind that there's something like hundreds of dragons in the world). Why does Quinn believe that if they go looking for the dragon, it will be able to figure out where the humans are living? I literally have no idea. I have no idea why they're still afraid of being found, given that a different dragon already found the community and destroyed their crops, and I have no idea why he thinks that leaving the community in order to hunt down a dragon somewhere else will allow that dragon to track back to the community, except that that's exactly what happens. Van Zan's crew finds a dragon outside of London and the next thing you know the dragon is back in Northumberland attacking the castle. It's stupid.

It gets stupider. At the risk of spoiling the grand finale, Quinn and Van Zan and Alex (Izabella Scorupco), a character who starts out as the helicopter pilot who has been hardened by combat with dragons and the loss of so many compatriots and then at the end is characterized as if she's never seen a dragon up close before so that her fear makes Quinn and Van Zan seem all the more fearless, go to London where they manage to kill the male dragon. Then the film flashes forward three months and Quinn's community is in the process of rebuilding, having not experienced an attack in that time, and they've managed to make contact with a community of survivors in France. The humans have won! At the risk of putting a damper on the party: what about all the other fucking dragons? There was only one male, but there were hundreds of females flying around, looking for food. This problem has not been solved, friends.

But even if you lay aside the issues of logic that plague Reign of Fire, I'd still be hard pressed to call it even a decent movie. Because special effects are improving by leaps and bounds all the time, you can't really judge the effects of a film from 2002 by the standards of 2016 (unless that film is an effects groundbreaker like The Lord of the Rings movies), but even giving the film some leeway in that respect, the effects still look pretty spotty. The dragons look okay, the balls of fire that appear throughout the film look terrible, and the whole climactic moment when Van Zan sacrifices himself to strike a blow against the dragon has the distinctly bad green screen look of "oh shit, we've run out of money." Add to that how grim and dour the whole thing is (McConaughey, in particular, delivers a charmless performance) and Reign of Fire is about as far from summer fun as a movie can get.