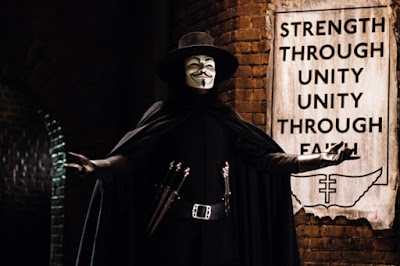 "People should not be afraid of their governments. Governments should be afraid of their people." A fine line for a screenplay, but one that ignores a pretty basic fact: governments enact measures to make people afraid of them precisely because governments are afraid of their people. But, hey, V for Vendetta isn't a lesson in politics; it's just a dystopian thriller that drapes itself in political ideas to keep its story moving forward. It's tempting, then and now, to look at it and compare it to the political situation of the present day and ask just how far removed from this vision things are, but the film's politics ultimately don't stand up to much scrutiny. That doesn't mean that it isn't effective and entertaining for exactly what it is - a mystery/action thriller - but the fact that it expresses a few political sentiments to create an urgent us versus them framework doesn't mean that it's more than what it is, either.


The Story
Set in the not too distant future in Britain, where a totalitarian regime has taken hold, a young woman gets involved with a masked vigilante known as V, who is out to get revenge on those who wronged him and to destroy the government. As a police inspector works to uncover the secret of V's identity, V spends a year building towards his master plan which will culminate in the common people rising up in revolt against those in power.


The View From 2006
The Good: "Despite its disparate influences, Vendetta feels captivatingly original. The multilayered film can be appreciated strictly as an action thriller or for its deeper message about personal responsibility, political oppression and revolutionary change. One powerful theme centers on the notion that ideas live forever, their power undiminished even as those who espouse them die." - Claudia Puig, USA Today

The Bad: "Besides Portman's numb thespianizing, the movie is full of sordid developments. V's dagger-fighting and kung fu moves are entirely too fantastic for belief; they're just an expression of a prepubescent's dark view of total physical mastery of the universe. The villains... are all pudding-faced saliva blasters, too obvious for belief." - Stephen Hunter, Washington Post


The View From 2016
Ten years on, V for Vendetta, which was based on the graphic novel written by Alan Moore (who embraced this adaptation the same way he has embraced adaptations of his other works, by saying that he hates it and doesn't want to be associated with it), remains an eminently watchable film with a fine balance between action set pieces (including the destruction of Parliament) and character development. Although V (Hugo Weaving), who wears a mask throughout, remains an enigma - which is one of the film's strengths; because neither we nor the other characters ever know definitively who he was, he can encapsulate the notion that it's the idea that matters because it can live on through others - his protege Evey (Natalie Portman) is well developed and, since he puts her through some of the paces that he himself was put through during his time in government detention, we end up seeing his experience through her. Supporting characters, like the increasingly conflicted Inspector played by Stephen Rea and the talk show host played by Stephen Fry, who underestimates the lengths the government will go to silence dissent, are drawn just well enough for there to be some poignancy to their fates, and though the villain remains largely remote from the proceedings, he's depicted in a way that draws successfully enough on archetypes to be effective (being played by John Hurt doesn't help either).

Like all dystopian stories, V for Vendetta has a strong political bent, though revisiting it so many years later left me thinking that it's politics are, in some respects, its weakest aspect. While the film actively takes inspiration from events around the then-contemporaneous Bush administration, it's most lasting legacy is the Guy Fawkes mask, which has been adopted by the group Anonymous and has become a symbol of anarchic, anti-government, anti-establishment ideals and acts. What's strange about that, to me, is that Guy Fawkes was not an anti-government or establishment figure acting to dismantle the system and free the people from tyrannical rule. The purpose of the Gunpowder Plot was to remove King James I from the throne and install a Catholic ruler in his place, and the film's embrace of Fawkes as some sort of freedom fighter is probably the only time when the Catholic Church, the most powerful sustained institution in history, rife with corruption and abuse and at various times perpetuating acts of torture and suppression, has factored into the right side of the David and Goliath battle between freedom and oppression.

Yet, while it's choice of symbolic hero is spurious, and it leans so heavily into the Nazi iconography in its depiction of the Chancellor that it feels more like parody than anything else, there are things about the film's politics that do work, particularly in its depiction of the way that totalitarianism starts not with sweeping changes in the political sphere, but with smaller, more insidious changes in the personal/social realm. It begins by turning people against each other, creating an us and them mentality that bonds the "us" to whatever regime is in place, by creating an atmosphere of fear where "different become[s] dangerous." There's potency to the film's depiction of the social aspect of dictatorship that gives the narrative enough emotional grounding that it's closing moments - in which the people rise up and Evey identifies V as being, essentially, the spirit of the people - are rousing, as intended. V for Vendetta may not be the best movie of its kind (since it was released in the same year as Children of Men, it's not even the best movie about dystopian society released that year), but it still holds up as a great entertainment with just enough thematic heft to be resonant.
Posted by Norma Desmond at 8:00 AM