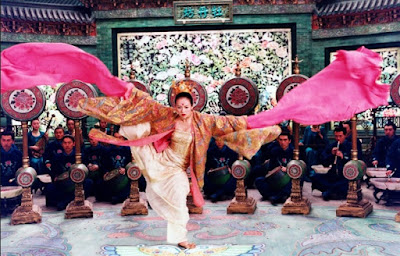 The most surprising thing about Zhang Yimou's House of Flying Daggers is that it gained a high enough profile in North America to net cinematographer Zhao Xiaoding an Oscar nomination, but didn't receive nominations for its costume or production design. House of Flying Daggers is a stunningly beautiful film in every respect, one that moves from one amazing set piece to another as it unfolds a tale of adventure and romance. One of China's major contemporary filmmakers (and one who may cross over in North America when his first English-language film, The Great Wall is released later this year), Zhang has several great, gorgeous looking films to his credit and House of Flying Daggers is one of his best and most enthralling.

Set in the year 859, the Flying Daggers of the title is a rebel group causing trouble for the government with a Robin Hood ideology of stealing from the rich and giving to the poor, which has gained them the support of the common people. Two police officers and friends, Leo (Andy Lau) and Jin (Takeshi Kaneshiro) are tasked with finding and killing the leader of the Flying Daggers, whose identity no one knows. As part of their effort to capture the elusive leader, they come up with an elaborate scheme that turns on the rumor that a blind woman who is said to be working as a dancer in a brothel is really the daughter of the former leader of the Flying Daggers. Posing as a client, Jin visits the brothel and proceeds to get into an altercation with Mei (Zhang Ziyi), the woman in question, and when Leo comes on the scene he's poised to arrest them both but offers Mei the opportunity to keep her freedom by playing and winning the Echo Game, which is sort of like the game Simon but with drums. While playing the game Mei reveals her real identity by making an attempt on Leo's life, resulting in a battle between the two that Leo ultimately wins. He brings her back to the police station where she's threatened with torture if she doesn't talk before being "rescued" by Jin, who pretends to be a rebel sympathizer who wants to help her get to the headquarters of the Flying Daggers.

Jin and Mei go on the run together and, in an attempt to make the deception seem real, Leo and his men periodically "attack" them, allowing themselves to be felled by Jin and allowing Jin and Mei to continue their flight. As they run and fight together, Jin and Mei begin to grow closer, but Jin doesn't quite succeed in his plan to seduce her, and after the two are attacked for real, he learns that the military has gotten involved in the pursuit and don't know that he's undercover, putting him in real danger. Jin is now in deep and wounded from a fight with the military, and by the time he makes his way with Mei to the headquarters of the Flying Daggers, he has fallen in love with her. However, finding the location of the rebels is only the beginning for him, as he soon discovers that he isn't the only one who has been pretending to be someone that he isn't - nor is he the only man with a claim to Mei's affections. As the authorities begin to close in on the Flying Daggers (which is precisely what the rebels want), the three primary characters turn away from the crisis at hand and focus instead on their inter-personal drama.

The first thing that grabs you when you watch House of Flying Daggers is its aesthetic beauty. It's a rich, colorful, and exquisitely put together film from a visual standpoint that transfixes you as it begins to put its story into motion. The story itself is sort of simple when you get to the basics; the battle between the authority of the day and the rebels is the spark that gets the story going, and the film is named for the rebel group, but in the end that's not really what it's about. Instead, it's a story about a love triangle between a man and a woman who start out on the same side and a second man who is thrown into the orbit of the woman by the first man. The climactic battle at the end isn't between the authority of the day and the rebels - we see the authorities starting to close in, but the film doesn't actually show us the fight that's about to go down - but between the two men and the woman. The narrative arc of the love triangle isn't exactly original as far as its beats go, but one of the more refreshing thing about the film is that, even though it is at heart about two men fighting over a woman, it manages to be about that in a way that doesn't completely rob that woman of agency or reduce her to the role of "prize." Mei is a very active character, fighting and scheming right alongside the male characters, and the film contains a scene in which one of the male characters attempts to alleviate the rejection he feels by punishing Mei sexually only to end up being punished himself for the attempt and being explicitly called out for what he was doing.

In addition to its strong showing in terms of how it depicts it characters, the film just seizes your attention with the way that it moves from one magnificent set piece to another. The Echo Game sequence is brilliant on multiple levels, showing Mei and Leo engaged in a game of mental chicken, each appreciating the acuity of the other while trying to gain the upper hand, and unfolding it in a dynamic, graceful, dazzling way as Leo creates a sequence of drum beats by hitting the drums with beans, followed by Mei recreating the sequence through dance. Second only to that sequence is a fight sequence that takes place in a bamboo forest with figures flying in and out of the trees and Jin and Mei ending up boxed in by bamboo spears tossed their way, though one could also make a case for the sequence which concludes the film and finds the three members of the triangle duking it out in a sudden blizzard. House of Flying Daggers is a bold and exciting movie from one of cinema's modern masters, one which nicely balances its goals as a character piece with its ambitions as a martial arts movie. It's a masterpiece.
Posted by Norma Desmond at 8:00 AM

Beautiful is a great way to describe it. Every frame of this thing is gorgeous. The look is a great aid to the story which is pretty basic stuff, as you said. Great review.