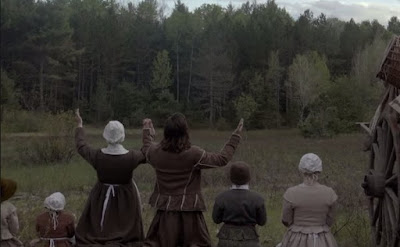 Although its low budget means that it's already a success even with a domestic box office of only about $20 million so far, I reckon that The Witch would have found greater success with a different marketing strategy. Sold as a horror movie, it's not likely to fulfill hardcore horror fans and gain good word of mouth (as its "C-" CinemaScore can attest) from those going into it expecting a visceral experience. The Witch is a horror movie in the way that, for example, Tod Browning's Dracula, James Whale's Frankenstein, and other 1930s monster movies are horror movies; it's atmospheric and deals with the supernatural, but it's not scary to a modern audience accustomed to jumpscares and creative, graphic deaths. It is, however, marketed as if it's a scary movie, which likely keeps a lot of non-horror fans away, whereas if the film were marketed as a psychological drama, those missing audience members might show up and might enjoy it for what it really is.

Set in the 17th century, The Witch opens with the family at its center being cast out of their Puritan community for being too hardcore in their practice of Christianity and venturing into the untamed wilderness in order to build a new life for themselves. The family consists of William (Ralph Ineson) and Katherine (Kate Dickie) and their five children: eldest daughter Thomasin (Anya Taylor-Joy), eldest son Caleb (Harvey Scrimshaw), twins Mercy (Ellie Grainger) and Jonas (Lucas Dawson), and an infant son, Samuel, born some months into their exile. Isolated in a small clearing at the edge of the vast forest, the family has built a home and a farm which is not quite up and running yet, but William remains hopeful that he can make things work. That hope is shortlived, however, and begins to disappear at the same time that Samuel is snatched away, carried off as Thomasin is playing a game of peek-a-boo with him at the edge of the forest. In addition to Samuel vanishing - which William attributes to a wolf, while Mercy and Jonas accuse Thomasin of having "witched" him - the farm's crops are failing and William and Caleb are unable to catch any food when they venture into the woods to hunt.

With tensions high, a rift develops in the family between Katherine and Thomasin, with the mother blaming the daughter for the disappearance of the baby and expressing that rage by laying the blame for everything that goes wrong at Thomasin's feet, including the disappearance of a family heirloom, which William has secretly traded away for hunting supplies. After overhearing Katherine and William discussing sending Thomasin away to work as a domestic servant for another family, Thomasin and Caleb sneak off into the woods, where Caleb goes missing while chasing after their dog. When Thomasin returns alone, there's a new layer of distrust to Katherine's treatment of her daughter which is only deepened when Caleb returns many hours later and on the verge of death. As the situation becomes more dire and the word "witch" transforms from a taunt traded privately between siblings to an accusation voiced for everyone to hear, the family turns against Thomasin and are deaf to her pleas that she is not, in fact, a witch. But even she knows that there is an evil presence in their midst, if only she could get someone to believe her about who it is.

The Witch, which was written and directed by Robert Eggers, is an interesting film in that it appears to be condemning the sort of blind hysteria that informed the Salem witch trials while also giving credence to those fears by virtue of the fact that there really is a witch behind the series of tragedies that befall the family, a fact which has lead some critics to accuse it of trying to have its thematic cake and eat it too. My own read on the narrative is a bit different, in that I see those seemingly disparate strategies as working together to form one idea, namely that the evil isn't in the witch, per se, but in the fear that makes the witch powerful; in other words, that it's an interior thing rather than an exterior one. There is an actual witch (or witches) out there in the forbidding woods, but evil is already present on the farm in the form of Black Phillip, one of the goats who is actually Satan in disguise, and while Thomasin does eventually embrace Satan and become a witch herself, she doesn't really have a lot of options left at that point. Her choices are starving on the dead farm, going back to the settlement and facing persecution for what's happened to her family, or giving in and becoming what everyone has already decided she is anyway; the choice is join or die. Thomasin isn't a witch when she's accused of being one and only becomes one after being ostracized and punished for it, so that in effect the fear of the monster has created the monster. The evil (a witch) is always real, existing beyond the borders of society (in this case the farm), and the potential for evil (Black Phillip) is present within those borders, but it's only when the community (the family) gives in to the fear and makes a scapegoat of a portion of their population (Thomasin) that they increase the evil by adding to its numbers (Thomasin joining the coven in the woods). The fear, then, is like a self-fulfilling prophesy, creating an enemy where one did not actually exist by treating a person (or persons) as guilty merely by their presence rather than on any actual evidence.

If one goes into The Witch expecting the sort of scares you would get from today's most durable horror franchises, the result will likely be, at best, disappointment and, at worst, frustration, because it's really not that kind of movie. It is, however, a really thought provoking film and the hand-crafted feel to its production elements lends the piece a sense of authenticity that in turn makes the family's slow descent into hell more dramatically rich (though the somewhat muddy looking perpetual twilight of the film's cinematography gives me a renewed appreciation for what someone as skilled as Emmanuel Lubezki can accomplish with natural light). Although it's already a strong contender for the 2016's most divisive film (at least in terms of the difference between its critical reception and audience reaction), The Witch is a strong debut feature from Eggers that, while it may not deliver a lot of intense, in the moment terror, will succeed in slipping under your skin and will keep your brain turning back to its story for some time after you've watched it.
Posted by Norma Desmond at 8:00 AM

Great review! I read the script so I'm good but you might wanna add a spoiler warning in there.

I thought the marketing was fine - even if people are dissapointed and hordes of simple crowds eating popcorn won't like it, they still made money based on hype. A24 should have pushed even harder and release it last Halloween

We'll have to agree to disagree about the marketing. I almost didn't see it because it's marketed as a horror movie and I'm a huge baby when it comes to horror movies, but when I saw it I didn't find it scary at all, so I'm guessing that horror fans will maybe feel like they're not getting what they were promised. But, yeah, it's making money regardless because the budget was so low.