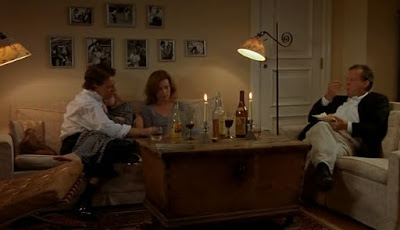 Faithless begins with its protagonist solemnly intoning that divorce is the most traumatic personal failure one can endure. The film was written by Ingmar Bergman (the protagonist, incidentally, is named "Bergman," though never addressed as such through the course of the film), who would know of what he speaks, having been divorced three times. Directed by Liv Ullmann, arguably the most famous of his many muses, the film is a meditation on the enduring pain of the breakdown of a marriage, though it's told, interestingly, not from the perspective of a husband and wife, but from the perspective of the wife and the lover for whom she leaves the marriage. At two and a half hours, during the course of most of which everyone on screen is utterly miserable, it can seem daunting, but it doesn't take long for the film to draw you in so completely that the running time feels like no time at all, and it's so fascinating in its depiction of two relationships breaking apart that it can be revisited multiple times with new discoveries in each.

It begins with Bergman (Erland Josephson) at his desk, trying to write. He conjures a character into being and names her Marianne (Lena Endre) - she isn't the Marianne, he insists, just a woman who happens to share the name - and asks her to help him create the story by telling him about herself. The story they begin telling together is about her, her husband Markus (Thomas Hanzon), and their friend David (Kristen Henriksson). Marianne is an actress, David is a director, and Markus is a conductor. Marianne and Markus are happily married and have a young daughter, Isabelle, and there has never been anything romantic between Marianne and David until one night when Markus is away and, sensing David's loneliness, Marianne invites him over for dinner. Later, he asks her to sleep with him and though nothing happens that night, the seed is planted, and soon the two are planning a way to have a brief affair, the opportunity presenting itself when Marianne is to go to Paris for work. Markus will be on tour in the US during this time, Isabella will be staying with Marianne's mother, and so Marianne and David make a plan to spend three weeks together in Paris and get whatever it is that has developed between them out of their systems.

After Paris they go their separate ways, at least at first. David would like to continue seeing each other, but Marianne has no intention of breaking up her family. Later, however, she is drawn back to him and her marriage eventually breaks up, leaving nothing between her and Markus but a fierce and prolonged battle for custody of Isabelle. The result is not only the destruction of the marriage, as well as the friendship between the two men, but the slow unraveling of the relationship between Marianne and David as the weight of the custody battle begins to sink them both as individuals and as a couple. The effect of it all lingers long after the fact as Bergman, who is clearly "David," continues to struggle in his present day with the legacy of these events. Marianne isn't just a character that he has invented, but a ghost who is still haunting him decades later, reminding him of the failings he has never quite been able to forgive himself for.

Faithless is an amazingly effective film when you consider that it abandons that most basic of storytelling tenets: show, don't tell. Much of it is "tell," with scenes playing out not through the dialogue between the characters on screen, but with an unseen Marianne instead explaining what was said and by whom. This makes sense, of course, given the conceit that Marianne is recollecting events for Bergman, but it's a testament to Ullmann's skill as a storyteller (and, of course, Bergman's before her) that scenes which play out this way can still possess a vital sense of immediacy. It also creates an interesting dynamic between what we're being told happened and what we actually see happening, which doesn't always line up exactly, as if we're hearing Marianne's perspective but seeing David's (or vice versa, depending on your point of view), or as if Bergman is recalling what happened while trying to fictionalize it by changing it ever so slightly.

Part of what makes Faithless such an effective and memorable piece of work is how free of affectation it is despite a framing device that might otherwise lend it an overall sense of artificiality. The scene in which Markus finally discovers Marianne and David together is the best example of this, as it unfolds not in the way it conventionally would in a film, with all the parties poised and composed enough to say the perfect things, but in a way that is more in tune with human nature. When Markus bursts into the room to start the confrontation, Marianne and David sort of stumble and fumble around, uncertain how to hold themselves, and at one point are reduced to fits of nervous giggles. Even though the scene itself is framed in a way that makes it look like a scene from a stage play, the behavior of the characters (and the performances of the three actors) is so unfettered and raw that any sense of "staginess" falls away.

As the three members of the love triangle, Endre, Henriksson, and Hanzon are all excellent, depicting their characters as being, for the most part, deeply in pain but also sort of ruthless in their willingness to inflict pain on others, albeit not always necessarily knowingly. One of the most striking things about the story is how much time these three people spend talking about Isabelle and how much they all love her and yet doing and saying things that can only make her miserable. Marianne and Markus use her as a pawn, each keeping her from the other in order to hurt them, the players are frequently seen screaming at each other in one room while Isabelle cowers in the next, and at one point one of them tries to manipulate Isabelle into doing something truly horrific in order to "win." They all do a lot of talking about how important Isabelle is and yet they continuously forget her until, finally, she disappears from the film completely. We know what becomes of David and we know the fates of Markus and Marianne, but what becomes of Isabelle is a mystery, which is the point. She's innocence lost, gone even as the players try desperately to hold onto it. Just as that loss resonates with the characters, so Faithless resonates with the viewer, telling a story which may not be pretty but is searing in its depiction of people failing each other and themselves.
Posted by Norma Desmond at 8:00 AM