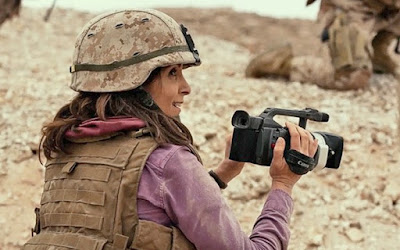 Meet Kim. She's a 40-something woman with a good job that leaves her unfulfilled, a relationship that she's decided to remain half-way invested in despite feeling unfulfilled by it, and a life that is marked by an inescapable sense of sameness and lack of forward movement. She's complacently unhappy and so when the opportunity comes to go to Afghanistan to work as a war correspondent, she sees it as no less than an opportunity to scrap her life entirely and remake it from scratch. "That is the most American white lady story I've ever heard," is the response she gets when she explains what she's doing in Kabul. If that moment was indicative of the level of self-awareness that Whiskey Tango Foxtrot was dealing in generally, it would be a much better movie, but it's ambitions are much lower. While the film certainly has its moments, it's ultimately not more than a star vehicle built on an uneasy mishmash of genres.

Tina Fey stars as Kim, a copywriter for a news program in New York who volunteers to go to Afghanistan to work as an on-camera correspondent after all the network's experienced war correspondents are moved over to cover the war in Iraq. Inexperienced and expecting to be overseas for only 3 months, Kim quickly finds herself pushed to what she believes are her limits as she deals with not just with the different cultural norms, but with having a war going on in the backyard. Once she makes a few friends - including fellow reporters Tanya (Margot Robbie) and Shakira (Sheila Vand), photographer Ian (Martin Freeman), and Fahim (Christopher Abbott), her translator and handler - and gets some firsthand experience out in the field tagging along with a group of Marines under the command of General Hollanek (Billy Bob Thornton), she begins to not just acclimate but truly enjoy her time in Afghanistan. If her life in New York was everything she thought she should want but ultimately didn't, then her life in Afghanistan is everything she never would have imagined that she wanted.

However, while Kim sees herself as having found a new purpose in life as she throws herself into her new job, her drive to capture bigger and riskier stories starts to seem like addiction. As the years go by, media attention and public interest shift further and further away from Afghanistan and towards Iraq and it becomes increasingly difficult for Kim to get her stories on the air. In response, she begins going to greater lengths to get stories that haven't been seen before and takes chances that put herself and the people around her in danger, which results in Fahim resigning from his work with her and warning her that if she keeps chasing the high she gets whenever she narrowly escapes a dangerous situation, she's going to end up getting herself hurt. But Kim pays him no heed and continues charging forward, determined not only to prove to her new boss that the work she's doing is still worth doing, but also to feed her newfound need for the thrill of being in near-death situations.

Loosely based on the memoir Taliban Shuffle: Strange Days in Afghanistan and Pakistan by Kim Barker, Whiskey Tango Foxtrot has a difficult time deciding what kind of movie it wants to be. Sometimes it wants to be a fish out of water comedy, getting some mileage out of Kim not only experiencing a culture so completely different from her own but also experiencing her own culture in an entirely different context; sometimes it wants to touch on women's issues, as in a sequence where Kim has to don a burqa or a scene in which she learns that the women of a village are the ones responsible for blowing up a well the Marines keep building and re-building and has to explain to Gen. Hollanke why they're doing it (and yet, even in those scenes, the film doesn't seem to actually want to say anything in particular about the situation for women in Afghanistan); sometimes it wants to be serious, showing violence and carnage; and mid-way through it decides that it wants to be a bit of a romantic comedy, developing a relationship between Kim and Ian which is probably best described as perfunctory. As with so many elements in Whiskey Tango Foxtrot, the romance just sort of seems to be there, serving no real purpose to the overall picture and instead acting as just another idea about what the film might have been if it had any cohesive vision guiding it.

That lack of vision is ultimately the thing that sinks the movie. If it had a solid narrative giving it a backbone, it would be easier to ignore some of the more problematic elements of the film, including the controversial casting of its two Afghani characters and the disappointing and cliched way that it depicts female friendships, but when a film only works in isolated spurts, issues like those only become more glaring. Although Fey is fine in the lead role (if a bit shaky in her ability to sell the portions of the film where Kim is supposed to come across as a thrill junkie) and individual scenes and moments work, Whiskey Tango Foxtrot just doesn't hang together well enough to leave you with anything more than a shrug once it's over. It's the kind of movie you watch and then forget about almost instantly.
Posted by Norma Desmond at 8:00 AM