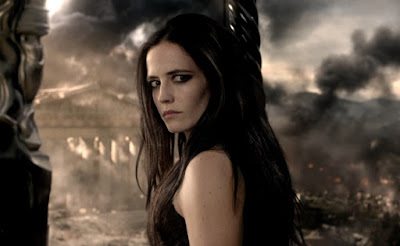 A movie like 300: Rise of an Empire is kind of like a test for the audience. At about the 20 minute mark, Eva Green beheads a man, holds his head up, and kisses it on the lips as blood drips from the neck, and as a viewer you're either in the mood to embrace a moment like this (which is not isolated, but representative of what the film is doing generally) as being so hilariously ridiculous that it becomes sublime, or you're not. I genuinely cannot imagine that there's any sort of middle ground. Rise of an Empire is not a good movie - though, one could argue that it is a good sequel, insofar as it feels completely of a piece with 300 - but enough scenes in it are so supremely entertaining as to make it worth a watch. You'll know you're about to watch one of those scenes within a second of it starting - they're all the ones with Green in them.

Featuring a story that unfolds, more or less, concurrently with the events of 300, Rise of an Empire's focus is on the Battle of Artemisium, which finds Athenian hero Themistocles (Sullivan Stapleton) leading the Greek forces in a naval battle against the forces of Xerxes (Rodrigo Santoro). With Xerxes occupied at Thermopylae fighting on land against Leonidas (Gerard Butler, appearing in footage from the first film) and his 300 Spartans, his naval forces proceed under the command of Artemisia (Green), who is Greek born but wants nothing more than to see all of Greece aflame in order to avenge a past which includes seeing her entire family slaughtered by Hoplites and then being taken prisoner and spending years in sexual slavery. After being discarded by her Greek captors, she was rescued by a Persian man (Peter Mensah, reprising the character that Leonidas kicks into the hole in 300) and trained in combat, eventually becoming a favorite of King Darius (Yigal Naor) and, in the wake of his death (at the hands of Themistocles, no less), the engineer of Xerxes' transition from regular man to God-King. Now she leads a thousand ships to meet the 50 entrusted to Themistocles, determined not just to win a battle but to thoroughly humiliate and then destroy the Greeks.

Despite Xerxes' forces coming into the battle with an advantage in terms of numbers, the Greeks prove difficult to defeat, winning the first day of battle by maneuvering their ships to ram the Persian ships at their weakest point, destroying and sinking them, and then win the second day by luring the Persian ships into a crevice where they become trapped, leaving them exposed to attack from the cliffs above. As far as Artemisia is concerned, this isn't a huge deal, the losses only accounting for a small fraction of her forces, but Themistocles impresses her enough as a military strategist that, despite being Greek, she offers him the opportunity to become her second-in-command. Themistocles declines, though only after his negotiations with Artemisia get physical (by which I mean they beat up on each other and have sex), and Artemisia responds by unleashing hell and making her lackeys' attempts to lead the charge against the Greeks look like child's play. With a little help from Queen Gorgo (Lena Headey), wife of the now dead Leonidas, Themistocles is still able to put up a fight, but only while riding "a tidal wave of heroes' blood."

Written by Zack Snyder and Kurt Johnstad, and directed by Noam Murro, Rise of an Empire is an exercise in the ridiculous that comes dangerously close to not working at all, rather than working just some of the time. 300 was not, of course, a work of stark realism by any measure and was heavily stylized in a way that, at the time, still seemed sort of exciting but which has been so overused in the years since that it now seems derivative. Still, it was so over the top in every way that it kinda sorta worked, and was engaging because the actors rose to the hammy, scenery chewing level demanded by the material. In 300 you rooted for the Spartans not just because they were designed to be rooted for, but because Gerard Butler held the center with a charismatic, too big to fail performance. The problem with Rise of an Empire is that it's charismatic, compelling performance comes from the wrong the side. As Themistocles, Stapleton makes basically no impression; if you were to tell me that he wasn't even a real person, but a computer generated figure, I would probably believe you. He's the "good" guy, the hero, but how are you supposed to root for him when there's so little there and Green is tearing it up on the other side?

As Artemisia, Green delivers an electrifying performance that manages to go big without descending into parody, which is something that not a lot of actors can successfully pull off. Where Stapleton goes for subtlety that just ends up seeming like a void, Green plays her role to match the character's surroundings, one in which CGI spurts of blood mark just about every scene and nothing gets done (or said) except in the most grandiose of fashion. Though history is not on her side, you sort of root for Artemisia simply because she's easily the most interesting character in the film - and that includes Xerxes who, when the sequel was planned after the initial success of 300, was actually supposed to be the star but instead ends up being little more than a footnote. Rise of an Empire isn't a film that I would recommend anyone go out of their way to see, but if you happen across it and decide to watch, Green's performance will make it worth your time.
Posted by Norma Desmond at 8:00 AM

Definitely agree with you about Eva Green, she's the only reason to watch this film...or at least I didn't pay attention to the film when she wasn't on the screen. I caught it on Cable late at night and was sucked in by her performance. She's great, the rest of the movie was a confusing mess.

I'm in full agreement with this review. In fact, my own review reads a lot like this one. Green absolutely dominates and Stapleton bores.

It's unfortunate that she ends up being great in dreck like this and the Sin City sequel. Maybe it's time for a new agent.