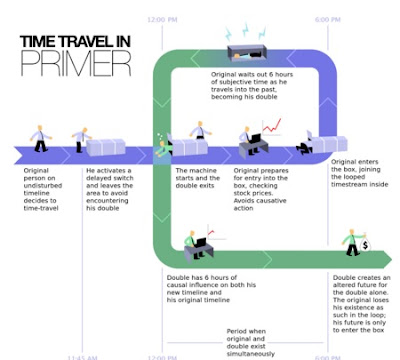 The question of accessibility is one of the more complicated aspects when considering a film's quality. One the one hand, an argument could be made that a film can only really be as successful as its ability to reach and connect with as many people as possible, meaning that anyone could sit down and watch it and absorb what it's doing to the extent that it's effective even with just one viewing. On the other hand, there are many really great movies that can't really be grasped with just one viewing and demand more work on the part of the audience to follow it the first time and then take what you know from the first viewing and use it to enhance your understanding on the next. In a certain context the words "see it again" can be an obnoxious thing to say to someone about a movie, implying as it does that if they didn't like it, it's because they just didn't "get" it, but some movies you really do need to see at least twice in order to understand what they're doing and how they're doing it. Those films are less accessible, but they aren't lesser films for that. Shane Carruth's Primer is one of those movies, a film that doesn't do a lot to help its audience along, but which feels more engaging and more rewarding with every viewing.

To put it in its simplest terms, Primer is about two men - Abe (David Sullivan) and Aaron (Carruth) - who invent a means of traveling back in time and find their relationship tested by the implications of what they're doing and their different ideas of what the technology should be used for. The two are engineers who, along with two other engineers, spend their non-work hours in Aaron's garage, sharing resources as they work on projects that they hope to patent and sell in order to supplement their incomes. While the other two engineers work on their own project, Abe and Aaron work on one which results in them accidentally discovering a way to create a time loop and a means of travelling several hours backwards into the past. The discovery is made using small objects placed into a box, after which Abe decides to build a box big enough to accommodate a human being and see if it will yield the same result. After testing it out on his own, he goes to Aaron to explain what he's done and suggests that they could use the technology to travel back several hours over a few days and use their knowledge of the "future" and what is going to happen in the stock market to make trades and gain small, regular windfalls. Aaron agrees and soon they're regularly traveling through the time loops they create, making monetary gains while trying to limit the amount of causal influence they have on the rest of the world.

Of the two, Abe is the more cautious and the more conservative. His goals are modest and he's extremely mindful of the danger that they will disrupt the fabric and time and throw it into chaos. Because of the way their machine works, there is a period of time in which each man will exist in overlap with himself, and they need to be careful to keep a remove between themselves and their doubles, but also to keep a remove between themselves, and their doubles, and everyone else so that other people aren't affected by what they're doing. However, while Abe worries over the philosophical implications of messing with time, Aaron becomes increasingly interested in how the technology can be used to manipulate the world around him. He daydreams about punching his boss in the face and then traveling back to stop himself from doing so that he won't suffer the consequences of it, but will still get to know the satisfaction of having done it, and he uses his knowledge of a potentially tragic event to travel back enough times to ensure that the situation is diffused, making himself look like a hero. Increasingly uncomfortable with what they've set in motion, Abe decides to put an end to it by using the secret "failsafe" that he's created, unaware that the man who was once his friend, but now seems increasingly like his enemy, is already a step ahead of him.

Primer can be a daunting viewing experience because it doesn't do anything to ease the audience into the story. The characters speak in a lot of scientific jargon and their conversations don't offer much in terms of exposition, as the characters speak to each other as two people who understand what they're dealing with and, therefore, don't need to explain it to each other. Moreover, the deeper that you get into the film, the more difficult it becomes to understand because the act of time travel makes the narrative increasingly convoluted. Having now watched the film multiple times, I can't say that I completely understand it (particularly its final third, when it gets into alternate timeless and confrontations between doubles and originals), but each time I've been intrigued enough by it to want to watch it again and try to understand it just a little bit more. One of the reasons why the film works despite being hard to follow is that it's ultimately less about the fantastical science fiction elements than it is about the relationship between Abe and Aaron. The focus on the story isn't so much on time travel itself, but on how the discovery of time travel affects the two men and their friendship, and it's because Carruth is able to tell the story at that very human level that it's able to engage and draw you back.

In an era of movie budgets that are almost unfathomably astronomical, it's amazing to see what Carruth was able to accomplish on a budget of just $7,000 (though to keep the budget at that level, Carruth had to do just about everything, not only writing, directing and acting in the film, but producing it, acting as cinematographer and editor, and being responsible for the production design). Though it ended up with a box office take of just under half a million, it's nevertheless one of the most profitable movies ever made in terms of its box office return on its budget. In most respects, the budget doesn't show, nor does the fact that it's a first feature. Carruth is a filmmaker who understands the medium and how to use it to communicate in a visual way and with Primer he creates a work that is so fascinating that, regardless of how impenetrable it might seem at first, you feel compelled to keep chipping away at its story.
Posted by Norma Desmond at 8:00 AM