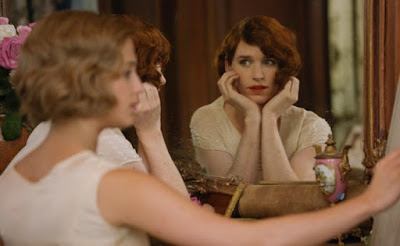 I can't help but wonder how much better The Danish Girl could have been if it was actually about Lili Elbe. In its present form, The Danish Girl is the sort of standard issue prestige picture Hollywood typically resorts to when it finds itself trying to grapple with the plight of the "other": handsomely mounted, polite and playing it safe narratively, and using a character that better reflects the sensibility of the people making the movie to act as the lens through which the minority character's story is told. This is Lili Elbe's story by way of Gerda Wegener. It's so much Gerda Wegener's story that she is the "Danish girl" of the title, referred to as such by another character. She's the character we meet first. She's the character we see last. The distinction between "lead" and "supporting" performances for the Oscars has always been a bit sketchy, but Alicia Vikander winning as supporting actress for this film renders the distinction entirely meaningless.

Adapted from the novel of the same name by David Ebershoff, The Danish Girl begins in the mid-1920s in Copenhagen, where Gerda (Vikander) struggles to make a name for herself as a painter while watching her husband, Einar (Eddie Redmayne), be widely celebrated for his landscape paintings. Things begin to change for Gerda when she gets Einar to pose for one of her paintings, standing in for the female model who hasn't shown up, and begins a series of work depicting a woman named "Lili," Einar's female alter ego. Not only is Gerda's work suddenly in high demand, but she and Einar discover a new facet to their relationship which seems to excite them both, with Einar indicating a desire to dress in women's clothing and Gerda not only encouraging it but helping him "invent" the character of Lili, helping to pick out clothes and shoes and going around Copenhagen with him to observe women so that he can practice mimicking their mannerisms. It is, at first, a private game between them, but after Gerda talks Einar into coming to a party as Lili, venturing out in public in that persona for the first time, everything changes. Not only does Lili have a romantic encounter with their friend, Henrik (Ben Wishaw), but afterwards confesses to Gerda that Lili is actually who she really is, having secretly identified as a woman all her life.

After the confession, Gerda and Lili relocate to Paris, where Gerda continues to get attention for her paintings of Lili, while Lili attempts to live as Einar but finds it increasingly impossible. Encouraged to get help, Lili sees a series of doctors in Paris, none of whom can understand her particular predicament and one of whom attempts to diagnose her as schizophrenic and lock her up. Meanwhile, Gerda has developed a friendship with Hans (Matthias Schoenaerts), an art dealer who had been a friend of Einar's when they were younger, which begins to take on a romantic dimension as Gerda struggles to negotiate the new terms of her relationship with Lili. Eventually, with Hans' help, Lili is able to find a doctor, Kurt Warnekros (Sebastian Koch), who not only takes her seriously when she says that she's a woman inside and tells her that he has met others like her, but also proposes a radical solution: sex reassignment surgery. Warnekros explains that it would a two-part surgery and that, never having been attempted before, it will come with a great deal of risk. Having suffered so long as a prisoner of her own body, Lili is ready to take the risk, changing her life, her marriage, and making history.

The Danish Girl is a well-meaning film, which I admit is perhaps damning it with faint praise. With a screenplay adapted by Lucinda Coxon, the film has a lot of empathy for Elbe, but its point-of-view is always from the outside looking in with curiosity rather than the inside looking out with understanding. This isn't Elbe's story adapted from her actual autobiography, Man into Woman, but from a novel which presents a fictionalized story about Elbe that Ebershoff has acknowledged as being more true-ish than true. The film makes an earnest effort to acknowledge and understand some of the issues that transgender people face, and to depict how the relationship between Lili and Gerda would be challenged and transformed without necessarily being broken, but it is also, ultimately, being very cautious about how it goes about things. Rather than portray Gerda as being bisexual, which she was in real life, the film instead presents her as being heterosexual which has two effects. First, it allows her to be the point of identification for the audience which, by virtue of demographics, is going to be largely heterosexual and cisgender, turning her into the equivalent of the "good white person" character who often appears in films about non-white people as the champion of their rights and interests. She's the good heterosexual, cis person whose understanding and compassion makes the trans person's life better.

The second effect is that it allows the film to sidestep depicting Lili as an object of sexual desire. Though they remained married, the sexual relationship between Lili and Gerda is depicted as having stopped once Lili came out, and though Henrik expresses interest in Lili, it's later explained that he's actually homosexual and his interest is in Einar. Lili is ultimately a chaste character, while Gerda's heterosexuality is affirmed through her budding relationship with Hans. Rather than try to explore Lili as navigating the realm of sex and sexual desire, the film focuses itself instead on the idea of gender - and, particularly, femininity - as performative, a strategy which has a curious side effect. The idea is emphasized through multiple scenes of Lili studying and mimicking the movements of other women, resulting in images where women appear in fragments - hands, legs, hips, eyes, etc - and always as the object rather than the subject. The film can't seem to get a handle on the idea of a woman in the fullness and subjectiveness of her being, so it's perhaps no wonder that can only conceive of Lili's life in a somewhat limited fashion.

Yet, for all that, The Danish Girl is often a very compelling film and that's because of the performances by Redmayne and Vikander, both excellent. There's so much emotional weight to their scenes together, with Redmayne's Lili being vulnerable and afraid, but also relieved to have someone who wants to understand her, and finally unwavering in her desire to do what's best for herself, even if that may be at odds with Gerda's happiness; and Vikander's Gerda trying to negotiate a complex set of feelings that goes along with learning that her husband is really a woman. She is, for the most part, supportive, though she struggles to accept that Einar is gone, never to return, and that Lili will be the permanent fixture, but she's also angry at times, demanding that Lili bend a little in order to be a support to her and help her needs be met. The dynamic between the characters is fascinating, and Redmayne and Vikander are able to bring a complicated set of emotions to all of their scenes together that makes The Danish Girl worth watching even though it's never quite as brave a film as it ought to be.
Posted by Norma Desmond at 8:00 AM