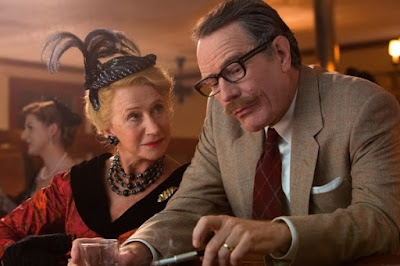 Last fall, Quentin Tarantino got himself in a bit of hot water for an interview in which he suggested that Ava DuVernay's Selma wasn't really snubbed at last year's Oscars because it was a film better suited to being a TV movie. Despite the fact that TV is currently the "it" medium where all the most talked about work is being done right now, the implication in suggesting that it should have been a TV movie is that it's wasn't good enough, that it's a work of high-brow mediocrity designed to be consumed by the wide-ranging television audience, rather than a challenging work of art designed for a more specific and discerning film audience. Everyone is entitled to their opinion, of course, but that opinion was dumb. Selma is a masterpiece that deserved far more than the 2 Oscar nominations it got, and it's a film that I believe will stand the test of time as one of the best that 2014 had to offer. Now Trumbo, on the other hand? This is a glorified TV movie, one so superficial, so facile, so unwilling to challenge its audience in any way that it would have had to have been made more than a decade ago, well before TV started to mean "prestige," just make it onto the air.

Bryan Cranston stars as Dalton Trumbo, famed Hollywood screenwriter and an active member of the Communist Party. With the world having transitioned from World War II into the Cold War, and the Soviet Union having transformed from wartime ally to post-war enemy, flushing Communist and Communist sympathizing elements out of the United States has become job number one in Washington and Hollywood alike. In Hollywood, the task is taken up by John Wayne (David James Elliott) and gossip columnist Hedda Hopper (Helen Mirren), who are determined to keep subversive types out of the movies lest they turn all-American entertainment into Soviet propaganda. When he's subpoenaed to testify before the House Committee on Un-American Activities, Trumbo, along with 9 other screenwriters, refuse to answer questions directly, playing a long game that relies on the belief that any conviction for contempt of Congress would be overturned by the Supreme Court's liberal majority. However, the death of Justice Wiley Rutledge throws a wrench into that plan and Trumbo and the other writers end up serving 11 months in prison, serving part of that sentence, ironically enough, alongside J. Parnell Thomas (James DuMont), the former chairman of HUAC now doing time for tax evasion.

Once out of prison, Trumbo and the rest struggle to regain their livelihoods in the face of the Hollywood Blacklist, which prevents them from working in film. Or, at least, that's the intent. Working on the theory that a rose by any other name would smell as sweet, Trumbo writes a screenplay for what will become Roman Holiday and convinces his friend, Ian McLellan Hunter (Alan Tudyk), to put his name on it in order to get it produced, which results in Hunter winning an Oscar for the work. The success of that ruse inspires Trumbo to try it on a grander scale, making a deal with the King brothers, Frank (John Goodman) and Hymie (Stephen Root), purveyors of low budget B-movies, to start churning out screenplays under various pseudonyms. So much work is available via the Kings that Trumbo turns it into a factory-like production, bringing in other blacklisted writers to help write the screenplays, and tasking the members of his family, including his wife Cleo (Diane Lane) and daughter Nikola (Elle Fanning), with running the various errands necessary to keep the enterprise afloat. Trumbo's goal is nothing less than a takeover of Hollywood so complete that the blacklist becomes meaningless because all the people on it are now working, but the single-mindedness of his crusade, and the selfish way that he demands the time and attention of those closest to him, may cost him his family in the process.

As a film about a writer, Trumbo spends a lot of time letting its characters talk but doesn't spend much time actually saying anything. "The blacklist was bad." Yeah. And? At one point, Trumbo's friend and fellow blacklistee Arlin Hird (Louis C.K.) accuses him of speaking as if he expects every word to be chiseled into stone for posterity, and that's pretty much what the film itself is doing, spoonfeeding you lessons in easy to digest soundbites as it bolsters the righteousness of its protagonist by making the villains so cardboard thin they'd fall over with the slightest of breezes. Trumbo is a film that has no interest in subtlety or in descending beyond the absolute surface of the story, making the easiest and most obvious play at virtually every turn, and ending the film with one of the most patronizing scenes of 2015. It's the sort of film that's designed to make liberal-minded audience members feel smart by appealing to the most basic liberal ideas and concepts and then pretending that such things are revelations that the rest of the world simply hasn't woken itself up to yet (and, bear in mind, I say that as a liberal-minded viewer; I have no idea what a conservative viewer might think of a movie like this, but I assume that conservatives don't see movies unless they have some religious bent to them or are based on books by Ayn Rand).

With respect to the performances, Cranston is fine as Trumbo, albeit somewhat mannered, but is battling against a screenplay that requires the character to be less of a human being and more of a human soapbox. He's a conduit of grand speeches who only occasionally gets to be a real person, but when those occasions arise Cranston is more than up to the task and is able to bring some humanity to a man depicted most often by the film as the human embodiment of a political pamphlet. He fares better, certainly, than Mirren who is stuck playing a caricature so broadly drawn she might as well have the word "villain" stamped on her forehead. The best performance in the film, really, is that of Lane, who has the luxury of playing an actual human with actual emotions and actual conflicts, particularly as the film goes on and she has to act as a sort of mediator between a husband busy pursuing his ideals and expecting his family to support him around the clock and a daughter trying to break away to carve out her own identity built on her own ideals. In a film that feels phony and artificial almost the whole way through, Lane's performance is the one thing that feels consistently natural and true.
Posted by Norma Desmond at 8:00 AM