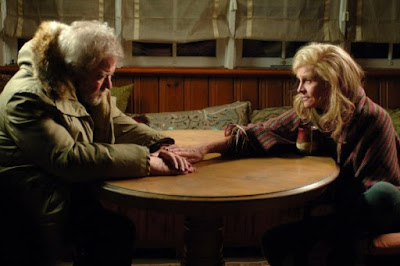 The world for her is becoming a bare canvass, a place full of blanks that her mind struggles to fill so that she can carry on rather than be rendered paralyzed with fear. Part of what makes Away From Her so effective a film is that it manages to find a sustained visual way of expressing the loss that she - Fiona, played wonderfully by Julie Christie - is experiencing, and couples it with the deeply emotional and very complex experience of her husband as he reckons with their past, tries to come to terms with their future, and does whatever he can to stave off the feeling of helplessness that threatens to overwhelm him. Now almost 10 years old, Away From Her remains a powerful drama, one fueled not by melodramatics, but by strong character work by the actors in front of the camera and by sharp, empathetic work behind the camera by Sarah Polley, making her feature debut as a writer/director.

At the center of the story are Fiona and Grant (Gordon Pinsent), a couple who have been married for 42 years and have long since retired to the country, living in the rural cabin that once belonged to Fiona's grandparents. Lately Fiona has started to forget things, pausing mid-task as if unsure where she is and what she's doing, unable to recognize formerly familiar objects, wandering off; she confesses that she feels as if she's disappearing as Alzheimer's begins to make her frame of reference more and more limited. While Grant has convinced himself that they can face the disease together and re-order their lives in a way to manage it, Fiona sees things more clearly and knows that she needs to be in a facility that is equipped to address the issues that she's going to be facing from now on. She makes arrangements and checks herself into a nursing home, gently dismissing the many objections that Grant finds, including the 30 day period during which he will be prohibited from visiting, assuring him of the strength of their relationship and that this is for the best. 30 days later, however, Grant goes to visit her and finds that she has no idea who he is and has formed a fierce attachment to Aubrey (Michael Murphy), another resident.

At first Grant's strategy is persistence, showing up every day, trying to get time alone with Fiona, bringing her things that he hopes will remind her who he is and what they are to each other. For the most part, he's met with blank looks and nervous politeness as she brushes him off in order to turn her attention back to Aubrey. He grows frustrated, but he also grows penitent, thinking back over the circumstances of his marriage and confronting the ways that he failed Fiona as a husband, wondering if perhaps he is now being punished for the pain she endured in their past. He begins to get used to being ignored by Fiona when he visits, to simply watching her from afar, and then learns that Aubrey is leaving the facility as a result of his wife, Marian (Olympia Dukakis), no longer being able to afford to keep him in the facility. With Aubrey gone, Fiona falls into a deep depression which leads to a rapid deterioration of her physical health. Having wanted nothing more than to separate Fiona from Aubrey since his first visit to the facility, Grant must now reconcile himself to the fact that what he wants may not be what's best for Fiona and must find a way to make things right.

Adapted from the short story "The Bear Came Over the Mountain" by Alice Munro, Away From Her tells a story that is sorrowful but not romanticized with regards to the central relationship. Grant was not a faithful husband during the earlier years of their marriage, a fact that Fiona is keenly aware of and which she speaks of in a way that isn't reprimanding and that doesn't cast her as a long suffering martyr, but nevertheless makes it clear that it was painful to her that he couldn't resist temptation. At the same time, however, she expresses that she's made peace with the past and that their marriage isn't defined by his lack of fidelity, and for his part, despite having strayed on many occasions with various young women who filtered in and out of his classrooms when he was a University professor, his relationship with Fiona was always the thing that was paramount to him. The story of their marriage has not been a perfect one, but when they had to make a choice, they chose to stay together and Christie and Pinsent play all those complicated, messy beats beautifully. Christie received tons of accolades and awards for her performance as Fiona (well-deserved, all of them), but Pinsent is most definitely her equal on screen and delivers a performance that expresses his character's inner life largely through body language. There's a great moment when Fiona brings up the name of one of Grant's long-ago lovers and the way that Pinsent holds himself during that scene says everything about the way such conversations have gone in the past, just as the way that Christie lightly dismisses his worry indicates that she knows she's turning the screw. The give and take between the two actors is so compelling that even though the characters spend a long stretch of the story separated, their relationship still carries the narrative.

As a director, Polley is confident and assured, allowing the actors lots of room to explore their characters and not crowding the performances with a ton of stylistic flourishes, choosing instead to style the film in a subtler way that emphasizes the character in the frame. This strategy is evident in the shot which first indicates that something is wrong with Fiona, depicting her and Grant cross country skiing and her pausing and looking out at the snow covered land stretching out in front of her as far as she can see, the landscape's blankness reflecting what's going on in her mind. Polley takes that strategy further, however, working with cinematographer Luc Montpellier (with whom she would re-team for her second feature, Take This Waltz) to create a sense for the viewer that everything is getting obscured around the edges. Throughout the film, the light is centralized in the frame so that the edges are a little darkened, as if the edges of the picture are fading out. In some scenes this effect is subtle and in others, many of them taking place at the nursing home, the light floods the center of the screen so that the fading is more noticeable, and it acts as a visual metaphor for what Fiona is experiencing. As her mind goes, she's able to focus on whatever or whoever is right in front of her but the surrounding context is dimmed, the details fading away and darkness encroaching. Yet for all that Away From Her isn't a particularly mournful movie and ends on a note of happiness - one which might be short-lived, but is happy nevertheless. It's a story that acknowledges the darkness, but ultimately chooses to bask in the light, however brief it might be.
Posted by Norma Desmond at 8:00 AM