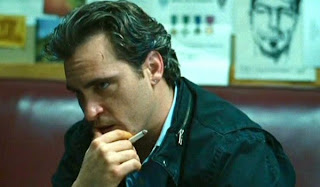 Writer/director James Gray's We Own the Night is an utterly gorgeous film to look at and when it works, it both looks and feels like a masterpiece. Unfortunately it doesn't work the whole way through. The first third is solid, near perfect. As the story goes on, though, it starts to lose something, be it focus or purpose or energy - it's hard to articulate exactly what happens, but the film starts to become more muted at precisely the moment when it needs to ratchet things up. It is, throughout, beautiful to look at - Gray, who here collaborates with cinematographer Joaquin Baca-Asay (who also photographed Gray's 2008 film Two Lovers), is one of the most painterly directors working right now - but looking great can only take a film so far, even if it's also built around a wonderful leading performance.

Set in New York in 1988, We Own the Night begins with Bobby Green (Joaquin Phoenix), the manager of a successful club owned by a Marat Buzhayev (Moni Moshonov), a Russian businessman, and out of which Marat's nephew, Vadim (Alex Veadov), runs drugs. Bobby has a close relationship with Marat, who is like a surrogate father to him, but has distanced himself from his biological family, even going so far as to take his mother's maiden name in order to disassociate himself from his father, NYPD Deputy Chief Burt Grusinsky (Robert Duvall), and brother Joe (Mark Wahlberg), a Captain with the NYPD who is about to head up a special drug task force. The only person who knows that his name isn't really "Green" is his girlfriend, Amada (Eva Mendez), who accompanies him to a function at which Burt and Joe take him aside to warn him that drugs are being run out of the club and the police are aware of it. Bobby more or less shrugs the warning off, resulting in him getting arrested alongside one of Vadim's lackeys when Joe's task force raids the club. In the process, Joe makes it clear to Vadim that the police are gunning for him, specifically, and in retaliation Vadim puts a contract out on Joe. After Joe is shot outside his house, Bobby learns that Vadim was behind it and that his next target will be Burt. Desperate to protect his family, and against the wishes of his father, Bobby agrees to go undercover with the help of Lieutenant Michael Solo (Antoni Corone).

Bobby, who has an easy in with the Russians because Vadim is eager to bring him in on the drug ring, agrees to go into a meeting wired, but his nervous demeanor tips Vadim off, resulting in a shoot out between the Russians and the police and Vadim's arrest. After being arrested Vadim learns that Bobby is a Grusinsky and, after escaping from custody by feigning illness and then slipping out of the hospital, puts a contract out on him as well. Bobby, with Amada in tow, is put into protective custody while Burt and Joe, recovered from his injuries, work to find Vadim and bust up the drug ring. As things continue to escalate, Bobby finds himself at a crossroads, needing to put some distance between himself and his past and make a move towards a future that he has spent his entire adult life avoiding. Not wanting to be under his father's thumb, he rebelled and made his own way, refusing to follow in his father's footsteps the way that Joe has; but now, with everything on the line, he finds himself irrevocably drawn towards the police force. But as he finds himself tugged closer to the line of fire, he stands to lose what matters to him the most: Amada.

When I watched Gray's The Immigrant earlier this year, I was struck by the director's evocative use of light and shadow, and I'm struck by it here again. From a scene in which Amada emerges from down a hallway, to one in which Bobby is enveloped by darkness as he enters the drug den, and yet another shot where Bobby walks into a cloud of smoke, We Own the Night demonstrates Gray's keen visual style and functions as a great atmosphere movie. It is also a showcase for a great performance from Phoenix (and a solid, ever so slightly against type performance from Wahlberg), who plays Bobby not as the sort of tough guy typical of crime thrillers, but as a guy who is deeply vulnerable and very alive to the fact that he's disappointed his father. He wants to do right by his family and his father's expectations, even if doing so means sacrificing his relationship with Amada. One of the elements very much in the film's favor is that though Amada at first seems like she's going to be a typical femme fatale, the kind who would eventually betray Bobby either intentionally or inadvertently, she instead turns out to be true to him and the strain in their relationship comes not from her connection to his old life and the people he ran with therein, but from the fact that he begins moving forward in his life with no regard for her own wants and desires. The film looses something essential when she leaves it, and one of the weaker elements of the story is Bobby's willingness, after everything, to risk losing her to pursue a career path about which he seems less passionate than drawn towards out of some sense of obligation.

Overall, We Own the Night's greatest weakness is that the longer is goes on, the less believable it becomes and the more it starts to feel like it's been constructed in service of the necessities of the plot. I have no idea how realistic a situation like Bobby's would be in real life - in the film he becomes an informant and then, because of his connection to Burt and Joe and because of his knowledge of the Russian operation, he's sworn in so that he can act as a police officer for the sake of the case and put into a position where he's not only participating in the big raid at the finale but ultimately leading it, all before having any police training whatsoever - and ultimately that doesn't really matter; what matters is that I didn't find it believable within the movie, even after giving the film the requisite suspension of disbelief one must give to all films. Because the story started to seem less and less credible as it moved forward, any impact it might have had was naturally dulled, and what should have been an emotional finale instead left me cold. We Own the Night is a frustrating film to watch because parts of it are so good and work so well, but as a whole it falls short.
Posted by Norma Desmond at 8:00 AM

I had pretty much the same experience with this movie. It was very good at times, not so good at others and ended up feeling like it should have been much better. Good review.

Yeah, I expected to like it a lot more than I did because of my experience with James Gray's other work.