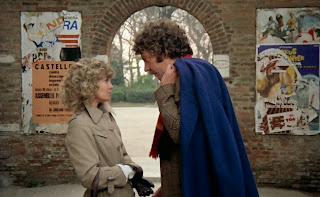 Don't Look Now is one of the most dread-filled movies ever made. A shadow hangs over it from the first to the last, and every scene has a palpable sense that the other shoe is about to drop. A psychological horror thriller about the lingering effects of grief, this adaptation of a short story by Daphne du Maurier is a deeply creepy and deeply effective movie that has influenced filmmakers far and wide since its release in 1973. It's taken me a while to catch up this this film, which is now considered a modern classic, and what struck me about it (aside from the fact of how good it is) is how the elements that made it controversial in 1973 still stand out now. Often it's difficult, so many years later (in this case forty), to see why something would have once caused such heated debate, but the frankness of Nicholas Roeg's film remains somewhat out of the ordinary. Don't Look Now would still be a compelling film even if that frankness had become muted by time, but the fact that it remains so sharp helps give the film a greater sense of timelessness than it would otherwise have.

Don't Look Now opens in the English countryside, where the two children of the film's central couple play in a sequence that is far more disquieting than it is wholesome, despite the would-be calming music playing on the soundtrack. The boy rides a bike and goes over a pane of glass, breaking it, while the girl plays with a ball. Their parents, John (Donald Sutherland) and Laura (Julie Christie) are inside the house, John looking over slides of the interior of a church where a red-hooded figure is looking at a stained glass window. John spills his drink on the slide and has what appears to be a premonition, rushing outside and into the pond where his daughter has fallen, pulling her out and trying (but failing) to revive her. Sometime later John and Laura are in Venice, where John is restoring a church. Still deep in grief for their daughter but trying to move forward, John and Laura meet two sisters, Heather (Hilary Mason) and Wendy (Celia Matania), while dining at a restaurant. Heather, who is blind, claims to be psychic and further states that she sees the Baxters' daughter, assuring Laura that she's "happy." Laura is, at first, shaken by this encounter, which causes her to faint and have to be taken from the restaurant in an ambulance. Later, however, she comes to find some degree of comfort in the idea and seeks the sisters out in order to hold a seance and contact her daughter. John, meanwhile, is skeptical to the point of anger, especially after Laura returns from the seance and tells him that their daughter has warned that they need to leave Venice as John is in danger.

John carries on with his work, though he's disconcerted by the sight of a child in a red coat which resembles the one his daughter was wearing the day she died, and he's rattled after an accident on the job nearly causes him to fall to his death. After receiving a phone call that their son, who is in England at a boarding school, has had an accident, Laura rushes back home - yet later that day John sees Laura, and the sisters, on a funeral boat. He's convinced that something has happened to his wife and his anxiety quickly becomes outsized as a result of the fact that a serial killer is at large in Venice. He goes to the police to report that Laura has disappeared, and though the police go so far as to bring Heather in for questioning, they also have John followed. Eventually John connects with Laura, who is safe and sound in England, and he begins to drop his guard, no longer seeing Heather and Wendy as potentially hostile forces, and pursuing the mysterious red hooded figure through the dark, deserted streets of Venice. What he finds when he follows her will be something familiar - though his epiphany may prove to be too little too late.

Don't Look Now is a film about grief and though it is officially set in Venice (and partially in England), it is really set in the psychological space of loss. The streets that John and Laura walk are often strangely deserted and dark, giving the sense that they are isolated together in their sorrow, and in one instance they are literally lost while out walking before finally finding their way and ending up in a place populated by other people, as if momentarily and metaphorically coming out of mourning to rejoin the world. The couple's togetherness is expressed through the film's graphic sex scene, which leaves little to the imagination, though it is also cleverly edited to make the viewer think that it's showing more than it is. The editing - which cuts back and forth between John and Laura having sex and John and Laura later getting dressed and ready to go out - further serves to show that the intimacy between John and Laura is fragile. They are at once together and apart, bound by their loss but also divided. What they ultimately become divided by is Laura's willingness to embrace the mystical and believe what Heather and Wendy tell her, and John's unwillingness to do the same as well as his unwillingness to engage with, or even acknowledge, his own connection to the supernatural.

Amazingly, Don't Look Now received absolutely no Oscar nominations - not for the superb performances from Sutherland and Christie, not for Roeg's tightly-coiled direction, not for Graeme Clifford's editing which, in addition to the thematic assets mentioned above, also helps render time as eerily fluid with past, present and future occuring seemingly concurrently, and not for the cinematography of Anthony B. Richmond which makes Venice seem like a misty gateway into another dimension. Why the film received no recognition is a bit of a mystery - one might argue that its classification as a "horror" film gave it a genre sheen that Academy voters found off-putting, but it came out in the same year as The Exorcist, which would be nominated for 10 Oscars. In the end, of course, none of this really matters as the film's legacy is measured not in awards, but in the fact that its influence can be read in such disparate films as Casino Royale, In Bruges, Memento and Antichrist (just to name a few) and that it continues to be revisited, re-evaluated, and discovered for the first time. Don't Look Now is a great film, one that has already stood the test of time and will only continue to do so.
Posted by Norma Desmond at 8:00 AM