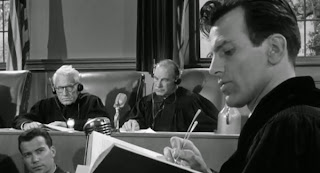 #5: Judgment at Nuremberg
Judgment at Nuremberg is one of the great "all star cast" films ever made, featuring Spencer Tracy, Burt Lancaster, Marlene Dietrich, Judy Garland, Montgomery Clift, Maximilian Schell (who won the Oscar for Best Actor), and Richard Widmark. Taking the Nuremberg trials as its subject, the film examines the nature of passive evil, and in that respect there are few exchanges more devastating than this film's final dialogue between Tracy and Lancaster. 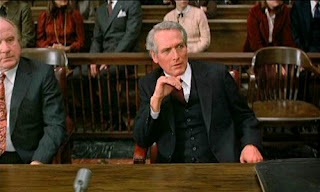 #4: The Verdict
Just by being directed by Sidney Lumet and starring Paul Newman, The Verdict already has one hell of a pedigree. Fortunately it doesn't rest on those laurels, becoming instead a powerful drama about a lawyer gone to seed who seizes what he sees as one last chance to do something right. The film would be nominated for 5 Oscars, including Best Picture, Director, Actor, Supporting Actor (James Mason), and Adapted Screenplay (David Mamet). 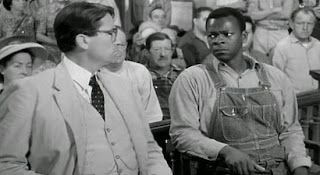 #3: To Kill a Mockingbird
To Kill a Mockingbird (both the novel and the film) is one of the most beloved American stories of all time - and with good reason. This is, quite simply, a marvelous movie and I'm not sure that there has ever been a better marriage of actor to character than Gregory Peck to Atticus Finch. It's one of his best performances and he was rightly rewarded with an Oscar for it. 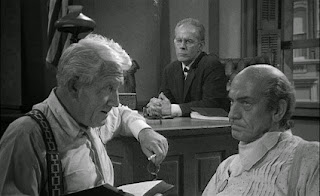 #2: Inherit the Wind
Inherit the Wind is one of my favorite movies ever. I think that Spencer Tracy and Frederic March, playing characters based on Clarence Darrow and William Jennings Bryan, respectively, are positively brilliant and the screenplay features dialogue full of wit and fire. I could go on and on about all the great things about this film, but instead I'll just suggest that, if you haven't already seen it, you simply go out and do so.

#1: 12 Angry Men
Courtroom dramas don't get any better than 12 Angry Men, the Sidney Lumet directed adaptation of the teleplay of the same name - though the actual courtroom only appears very, very briefly. This film is the standard by which all legal dramas (perhaps especially the ones which share the same title) are measured and it sets the bar very high indeed.
Posted by Norma Desmond at 8:00 AM

Can't really argue with any of these. Great list. Some others I enjoy:

I can't comment of A Soldier's Story or The Lincoln Lawyer as I haven't seen them, but the rest are all excellent choices.

As far as "classics" go:

- The Young Philadelphians (featuring a super-young, super-sexy Paul Newman).
- Witness for the Prosecution (Billy Wilder is my hero).