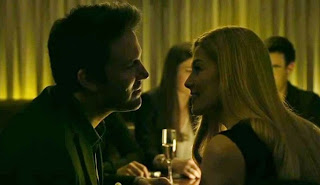 Because professional film critics seem to be taking great pains to avoid talking about spoilers in Gone Girl, I'm going to state right off the top that this is going to be a fairly spoilery review. If you've managed to remain unspoiled about this story, then don't read any further - although the fact that I'm not even sure how that's possible is one of the reasons I decided to go full-spoiler. I didn't even read the novel but went into the film aware of the plot twist because the book was so ubiquitous. The other reason I have no hesitation in discussing the plot in some detail is because the twist is, frankly, the least interesting thing about this story. That's not a knock on Gone Girl, which is a first rate thriller that unfolds with the sort of ferocious precision we've all come to expect from David Fincher; it's just an acknowledgment of the fact that there's so much going on here that the inner workings of the plot are really a secondary concern.

Gone Girl opens on the morning of the fifth wedding anniversary of Nick (Ben Affleck) and Amy (Rosamund Pike) Dunne. Nick spends the morning at The Bar, which he runs with his twin sister Margo (Carrie Coon), killing time before he has to begin the treasure hunt that Amy creates every year, which was a source of fun during the early years of their relationship but has since devolved into a sort of forced march through Nick's inadequacies as a husband, chief among them the fact that he's stopped taking any interest at all in the life of his wife. After receiving a phone call from a neighbor to let him know that their cat is out of the house and wandering around, Nick returns home, discovering the front door slightly ajar and what appears to be signs of a struggle in the living room. Two police officers - Boney (Kim Dickens) and Gilpen (Patrick Fugit) - arrive and take a walk through the house, and though they express little in the way of what they're thinking, the fact that Nick seems relatively calm and unconcerned about Amy, and that he seems to know absolutely nothing about her, including what she does with her days and who she spends time with, raise red flags. Also raising a red flag is Nick's angry reaction when he finds his father in the station, having wandered away from his nursing home. Nick puts forth an image of being nice and eager to please, but beneath that veneer (and not very far) is a simmering rage threatening to boil over - assuming that it hasn't already.

As the investigation continues and the news media becomes alerted to one of its favorite subjects - missing blonde women, and one who served as the inspiration for a series of children's books, no less - Nick's depressed, recession-gutted home town begins to take on a circus atmosphere. As Nick's behavior starts to make him look more and more guilty - behavior which includes a clandestine meeting with his mistress (Emily Ratajkowski) - he finds himself being tried in the court of public opinion, and the noose begins closing around his neck. Everything seems to point to foul play and Nick as the culprit, particularly once Boney and Gilpen find Amy's diary, which paints a picture of a marriage that has disintegrated into resentment and violence. But while Nick certainly emerges as the type of man who is likely capable of murdering his wife, the truth isn't actually in line with the countless wife-murdered-by-husband narratives that have played out in the media. The truth is that Amy is very much alive, having orchestrated her "disappearance" in order to get revenge against Nick for his failings as a husband and to finally escape the shadow of "Amazing Amy," the fictional character created by her parents and whose accomplishments over the years have served as a passive aggressive means for her parents to express their disappointment in her.

Gone Girl, adapted by Gillian Flynn from her novel, has a plot which could easily sink the whole endeavor simply because there are so many turns that it would be easy for the plot to get away with the film, turning it into a machine of reversals and about-faces in which the characters exist and act for the sake of the plot, rather than the other way around. Instead, and in the efficient way that is typical of his work, Fincher wrestles the plot into subservience to the characters, using Amy's outlandish scheme, and the way that it plays out, as a means of exploring its two main characters and the culture that has created them. While it takes a glancing look at the rabid, tabloid nature of 24-hour cable "news" media, exemplified here by a Nancy Grace-like harridan who starts calling for Nick to get the death penalty from pretty much the moment Amy's disappearance is made public, and the effects of the economic downturn, with the moral bankruptcy of its characters reflected in the boarded up shops and the empty shell that was once a shopping mall, this is a story about a relationship and about relationships. Gone Girl centers on the literal disappearance of Amy, but what it's really about is the figurative disappearance of personas adopted in the early, happy days of a relationship and then abandoned as love begins to curdle into resentment. Intercut with the present day investigation scenes are scenes from Amy's diary, which relate the happier beginning of her relationship with Nick, and what we see is that they were the "perfect" couple when everything was going right - when both were able to make a living as writers in New York and had the comfort of Amy's trust fund to fall back on - but started coming apart at the seams once circumstances changed, with both losing their jobs, Amy returning the bulk of her trust fund to her cash-strapped parents, and the pair moving to Nick's home town in Missouri. Amy thought she married a man with ambition, charm and a genuine interest in her, but instead ends up with a man who has, essentially, stopped trying, a man who resents her for the fact that she holds the purse strings and who distances himself from her except when he wants to use her as a vessel to fulfill his sexual needs (when he's not getting them fulfilled elsewhere). Nick, meanwhile, thought he married a "cool girl," a woman who would support him and his interests and act as a helper maiden whose job would be to make him the man he aspires to be, only to end up married to someone who ruthlessly pursues power and can only be happy if she's broken him and trapped him under her thumb. Both Nick and Amy feel as if the other has defrauded them, each hooking the other with a counterfeit persona, leaving them trapped together in a despair of their own manufacture.

Gone Girl has been accused by some as being misogynist, and though I can see elements which lend validity to that criticism, I ultimately have to disagree with it. A film can acknowledge misogyny without being misogynist itself, and I don't think the film is holding up Nick as a figure that we're supposed to admire or even really feel all that bad for. Nor do I think that Amy - calculating, narcissistic Amy, who contemplates suicide as the cherry atop her vicious sundae only until she realizes that killing herself would deny her the pleasure of seeing Nick punished - is meant to be representative of all women any more than Nick - shifty, casually hateful Nick, who would never raise a hand to his wife except for that time that he totally does - is meant to be representative of all men. These two people are, as Nick's lawyer (Tyler Perry) succinctly puts it, "fucked up" - both of them are fucked up, their relationship is fucked up, the way that they engage with the world is fucked up. They are toxic people and in its dark way, the film delights in using them to lay bare the ugly underbelly of all that we're supposed to find aspirational.

As the two leads, Affleck and Pike each deliver stellar performances. The former, who has plenty of experience of his own with getting beaten up in the press to bring to the character, plays Nick as a man who shouldn't be trusted even when you know that he's telling the truth, a slippery sort who wears different masks depending on the company he's in and is used to being able to say the thing the listener wants to hear. The latter, in what will hopefully be her long overdue star-making turn, plays Amy as chilly and quietly seething, a person who has spent her entire life in competition with a fictional version of herself and is now obsessed with the idea of "winning." Both performances are exactly what they need to be and are aided by Fincher's sharp direction and the visual flourishes which help further the characterization, from a shot of Nick's face as he drives his father back to the nursing home which makes him look positively monstrous, to a shot of Amy covered in sugar the night she meets Nick which makes her look as if she's already a ghost. Gone Girl is a very strongly rendered piece of work which, though it never quite transcends its inherent pulpiness (and I'm not sure it could given how lurid the plot is), is at least pulp of the highest order.
Posted by Norma Desmond at 8:00 AM