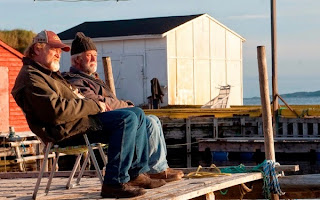 Films like The Grand Seduction are projects that are engineered to please. They don't take chances, they offer no innovations, but they demonstrate the simple pleasures of the familiar. You know from the beginning just how the film will end, and you know more or less completely how it will get there, so its success or failure hinges on whether it can charm you into thinking that you want to listen to a story that you've already been told. In that respect, Don McKellar's The Grand Seduction is a success even if, in the grand scheme of things, it's a minor work as likely to be remembered after the fact with some affection as it is to fade from memory completely. I'm sure it seems like I'm damning the film with faint praise, but I actually did rather enjoy it. It's a sincere story, told in relaxed fashion, and it knows how to make the most of the innate likeability of its cast and its setting.

The Grand Seduction is set in the small harbour of Tickle Head, Newfoundland, once a thriving community thanks to the fishing industry but now an economically depressed area where seemingly the only people who are employed are Kathleen (Liane Balaban), a postal employee who hands out the welfare cheques, and Henry (Mark Critch), the bank manager who cashes them. The only hope for the harbour is the promise of new factory that would open there if their bid is accepted, which is itself contingent on whether or not they can convince a doctor to take residence. One of the citizens pushing for the factory is Murray (Brendan Gleeson) who hopes not only to get back to work himself and see his once proud home get a second chance, but also to lure his wife (Cathy Jones) back from St. John's, where she's gone to work. After the Mayor pulls up stakes to take a job as an airport security agent in St. John's, Murray takes over the position as Mayor, but the former Mayor performs one last civic act when he blackmails a doctor into going to Tickle Head. The doctor is Paul (Taylor Kitsch), a plastic surgeon who is caught with a small amount of cocaine while going through airport security and agrees to practice in Tickle Head for one month in order to avoid prosecution. Determined to get Paul to sign on permanently, Murray and the rest of Tickle Head unleash a campaign of deception meant to convince Paul that Tickle Head is the place he never knew he wanted to live.

Paul is initially unimpressed with Tickle Head, which has none of the cosmopolitan comforts he's accustomed to like fine dining and cellphone reception, and is far away from his fiancée, Helen. Paul spends much of his time on the phone with Helen, alternately complaining to her about the ways that Tickle Head falls short and having phone sex with her, all of which is secretly being monitored and recorded via phone tap by Vera (Mary Walsh), the wife of Murray's best friend and partner in crime, Simon (Gordon Pinsent). Aided by the information gathered by Vera, Murray is able to tailor things more to Paul's liking, but soon enough he has greater worries. The factory, which he had promised his neighbors was a sure thing so long as they could get a doctor to come and stay, is becoming an increasingly unlikely prospect due to the fact that another bid is under consideration by the company, and that bid comes with a sizeable monetary assurance. After going to Henry to get a loan for $100k and being told that there's no way that's going to happen, Murray is left to scramble, bluff, and verbally tap dance towards a solution to both the factory problem, and the growing problem of his guilt for having deceived Paul, who has started to fall under the spell of Tickle Head.

The story that The Grand Seduction tells, which involves a small community banding together, a somewhat snobby city dweller discovering the uncomplicated joys of rural life, the inherent farcicality of the "double" life of the community as its members try to put on a show for the outsiders, and the small touch of romance, is a simple and inherently adaptable one. Indeed, it began as a French Canadian film called La Grande Seduction before spawning this remake, and at one point there were plans for French and Italian remakes as well. This is the sort of story that could take place virtually anywhere without missing a beat, which means that it's on the generic side, but that it also engages with the audience easily. Even when it starts to take the necessary turn for the dramatic towards the end, it hits those marks without straining for them, though it feels like the story cuts a few corners in order to achieve its tidy resolution (and the "romantic" subplot is a non-starter as a result of the would-be lovers sharing probably no more than five minutes of screen time together).

Yet, even if the film tends towards the narrative path of least resistance, it is not without its particular delights. Canadian film mainstay McKellar makes the most of the natural beauty of the film's setting and unfolds the story with a light touch that allows the cast to work their particular magic. Gleeson, a magnificent actor, brings a degree of gravitas to his character that helps sell the story's stakes, and he's surrounded by actors familiar to Canadian viewers who bring an easy, understated charm to the film which makes the story's community seem less "quirky" than gentle and earthy. As the film's secondary lead Kitsch delivers a fine performance in a role which is limited by the constraints of the story, which allows him to work in basically two modes: confused and surprised. Still, he has some nice moments with Gleeson and together the two sell, as much as possible, the quick resolution to the story's crisis. Both will have bigger and better films in their future (Gleeson already has, in the form of Calvary), but even if a harmless, well-wrought tale like The Grand Seduction doesn't lend excitement to their filmmographies, it doesn't bring shame, either.
Posted by Norma Desmond at 8:00 AM