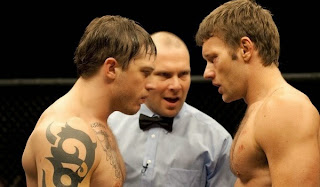 Today's Netflix recommendation comes as a result of three films that I've watched: The Warriors, The Dark Knight Rises, and Tinker, Tailor, Soldier, Spy. Warrior really isn't anything like any of those movies, except that it has a similar title to one and shares a star in Tom Hardy with the other two. Once again, Netflix's algorithms baffle me, but on this particular occasion the ill-thought correlation actually made for an excellent recommendation. I had vaguely recalled Warrior as a film that scored Nick Nolte a Best Supporting Actor Oscar nomination a couple of years ago, but the only other thing I knew about it was that the plot revolved around mixed martial arts. Not being into UFC, I wasn't sure how much Warrior was going to appeal to me, but it's actually a very classic type of Hollywood story and so emotionally engaging that any reservations I had were quickly dispensed with.

Warrior is about two men: Tommy Riordan (Tom Hardy) and Brendan Conlon (Joel Edgerton). As the film opens, Tommy has shown up on the doorstep of his father, Paddy (Nick Nolte), drunk and spoiling for a fight. The two have been estranged for years as a result of Tommy having run off with his mother in order to escape Paddy's abuse, and now Tommy has come to reopen old wounds, punish his father for his failings, and make it clear that the tables have turned and that he's now the one with the power. Paddy, a recovering alcoholic and born-again Christian, won't rise to Tommy's bait and instead just wants to start over with him, a prospect which Tommy rejects. Later, though, Tommy asks his father, who long ago coached him when he was a teenage wrestling phenom, to be his trainer when he decides to enter a mixed martial arts competition. The competition has a purse of $5 million, which Tommy intends to give in its entirety to the widow of a friend of his, a fellow Marine who died in combat. Paddy agrees to train Tommy on the condition that Tommy actually take direction from him, including moving back into his old room so that Paddy can control his diet and exercise regimen; Tommy agrees, but spending more time with his father does nothing to shrink the chip on his shoulder and he continues to take every opportunity to let Paddy know how much he hates him and that he always will.

Paddy's relationship with his other son, Brendan, is no better. Brendan was once a UFC fighter and is now a high school physics teacher, struggling along with his wife Tess (Jennifer Morrison) to keep afloat in a tough economy. On the verge of losing their house and everything they've worked for, Brendan decides to get back into mixed martial arts, which causes tension between him and Tess and results in him being suspended from his job. Needing to make a lot of money fast, Brendan decides to pursue the $5 million contest and enlists Frank (Frank Grillo), an old friend of his, to train him. Frank is reluctant, but is eventually talked into helping Brendan get to the big competition, which ultimately puts the two brothers on a collision course. While Brendan's relationship with Paddy is just as broken as Tommy's as a result of Paddy's misdeeds before getting sober, Tommy nurses a sharp resentment against his brother for the fact that he didn't leave with him and their mother, whom Tommy had to care for and watch die on his own. Though both men are considered underdogs in the competition - Tommy because he's come out of nowhere to tear through each opponent he faces, Brendan because he's considered over the hill - they are destined to meet in the final match, one which will be all the more fierce for the history between them.

As written, Warrior is a fair bit like Rocky, except in this case both the men in the ring are the Rocky figure. The film doesn't stack the deck in favor of either, making both men the one we want to see win and the one who seems to deserve it, too. Tommy enters the ring as a form of sacrifice, wanting to ensure the well-being of the family of a man whose death haunts him. Brendan enters the ring for the sake of his wife and their children and in order to save the family from financial collapse. Tommy is revealed to have saved the lives of several Marines before going AWOL, and he's celebrated as a hero though he's set to be taken into custody by the military police at the close of the competition. Brendan is beloved by his students as a teacher who can truly connect with and teach them, and he would be happy to work solely as a teacher if only he could actually make a living at it. Neither brother is the "human interest" competitor because they each have compelling stories, which means that the traditional sports movie narrative is subverted as even though a character the audience likes is going to win, that still means that the match could go either way. It's an effective way to tell the story and, though the film might have been burdened by having two protagonists, it doesn't allow itself to get weighted down by the necessity of two narrative threads, instead providing background and other information on both men in an efficient way that keeps Warrior moving at a fast pace. While some films need several scenes in order to properly dissect a fractured relationship, Warrior manages to tell us everything about Tommy and Brendan's relationship with just one scene they share together before they meet in the finale.

Warrior is a well oiled machine of a movie that hits all the genre sweet spots yet manages to feel fresh and exciting as well. This is due as much to the story's solid construction and the superb execution of director Gavin O'Connor as it is to the skill of the actors. Nolte, perhaps the perfect actor to play his role, brings a bone-deep weariness to Paddy but also brings touches of optimism to his portrayal. Paddy is ever hopeful that he can make amends with both his sons, taking Tommy's verbal abuse almost as a form of penance, and going to Brendan hat in hand, trying to put back together the fragments of what was once their family. He's cautiously proud of his 1,000 days of sobriety but we get the sense that he's been there before and left everyone, himself included, disappointed. Nolte is wonderful and heartbreaking, as are Edgerton and Hardy. Hardy, who glowers through the movie and plays Tommy as a tightly wound bundle of anger and grief, is reminiscent of A Streetcar Named Desire/On the Waterfront era Marlon Brando, not just in attitude but in physicality as well. He plays Tommy as brutish but deeply wounded and his performance, whether he's beating up on those around him by pointedly not communicating with them or literally beating up on those who enter the ring with him, is mesmerizing. As the most functional of the trio, Edgerton has perhaps the most difficult role as Brendan is not a figure built on pathos; he's simply a good man just trying to do right for his family and in playing that role Edgerton provides the film with an anchor. That Warrior fared so poorly at the box office when it has so much going for it (particularly so much which usually translates to mainstream success) is somewhat odd, but judging by its high ranking on IMDB's Top 250, it appears that it has found its audience after the fact. That's great, because Warrior is deserving of the adulation.
Posted by Norma Desmond at 8:00 AM