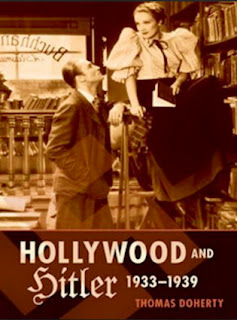 From the perspective of 2014 it can be sort of hard to imagine a time when people took a "wait and see" attitude to Hitler and the Nazis. Objectively, of course, one understands that such attitudes existed, given that Hitler was in power for 6 years before the commencement of World War II and the policy of appeasement that resulted in, among other things, the Munich Agreement; but because those of us living now have the benefit of hindsight, it's nevertheless difficult to imagine what it would have been like to live through a time when Hitler was treated as just another world leader and the Nazi party as just another political party rather than symbols for the depths of evil. Even more difficult to imagine, given the sheer number of Hollywood films in which the Nazis have appeared as the villains, is a time when filmmakers were reluctant, and even afraid, to alienate Germans by acknowledging the evils of the Nazi party. Thomas Doherty's Hollywood and Hitler, 1933-1939 is a fascinating book about a bizarre period in the history of Hollywood (and the world) and the ways that film can be a powerful medium for what it does and for what, unfortunately, it sometimes does not do.

Hollywood and Hitler is a scholarly work that approaches its subject matter in a very serious and direct way, methodically laying out the details of the evolution of American attitudes towards the Nazis over the course of the 1930s, demonstrating how the inability, or unwillingness, of both governments and Hollywood to stand up to Hitler and his party allowed the momentum of evil to continue to build, with one horrifying act of hatred being followed by an even more horrifying act being followed by a more horrifying act, and so on, unimpeded. Given how many of the studio moguls of the era were Jewish, it's amazing to consider the lengths that the studios went in order to work with the new regime in Germany overseen by Joseph Goebbels in order to maintain the relationship with the German market. Even after the unfolding of the policy of Aryanization which saw the purging of Jewish personnel from the German film industry and the flight or removal of most non-German Jewish personnel working in the Berlin offices of the studios business continued to carry on between Hollywood and Germany:


Paramount, Fox, and MGM decided to stay open for business. The three holdouts 'have too much coin tied up there [in Germany] and may be able to get some of it back by sticking,' explained Variety. 'They are loath to forget it and mark the sum down as a net loss.' To avoid the net loss meant acceding to Nazi hiring practices. 'American companies are beginning to reorganize their Berlin business staffs to coincide with Nazi orders to get rid of Jewish help'... Forced to fire their crack Jewish salesmen - on average, half of the payroll - the three studios scrambled to recruit a workforce without the proscribed bloodlines. An elaborate ethno-religious shell game ensued, as they moved Jewish American employees out of Germany and transferred non-Jews from other European capitals into Berlin to fill the slots.

Among the studios, only Warner Bros. would immediately cut ties with Germany, pulling its stakes out by the end of 1933. Warner Bros. would go on to be a leader in other ways, as well, producing a series of patriotic/propagandistic short films before transitioning into feature films which had no qualms about calling a spade a spade and a Nazi a villain. While most studios waited until after the tide had firmly turned against the Nazis to make their move, Warner Bros. took a stand right from the start and Doherty devotes an entire chapter to detailing Warner Bros.'s efforts against the Nazis. Although the annals of old Hollywood lore are full of stories about Jack Warner's less than admirable behavior, it would be impossible to put down this book without having developed a respect for a man (and his brothers) who actually stood up for his principles even if those conflicted with business interests.

The integrity with which the Warner brothers conducted their business is contrasted by the behavior of others, even those who, like the Warners, attempted to strike out against the Nazis before doing so was popular or common. The Hollywood Anti-Nazi League (HANL) emerges early in the book as potential heroes, doing whatever they could to mess up Nazi interests in Hollywood and the United States, but because many key members of the group were Soviet-loyal communists, the signing of the Soviet-German Non-Aggression Pact resulted in a complete derailment of the group's efforts against Nazism. After changing its name to "The Hollywood League for Democratic Action," the group began following the new Soviet line and supporting the very things that it had so fervently fought against for the better part of a decade, only to have to make another about face in 1941 when the pact was broken. As Doherty relates, "While driving through Connecticut, Donald Ogden Stewart [a member of and spokesperson for HANL from the beginning] heard a radio announcer read the news and burst into tears - not out of sympathy with the Russian people but out of relief. 'I was once more on the "right" side, the side of all my old friends,' he recalled. 'I could continue believing in my remote dream, the country where the true equality of man was becoming a reality under the philosophy of Marxism and Leninism and the leadership of the great Stalin.'" There's a lot to unpack in that story, but I'll leave it at the observation that if your political allegiance requires you to completely subvert your beliefs and support something that you know to be wrong, it's time to reconsider your political allegiance (and that's before even getting into the fact that Stalin and Hitler were basically the same guy coming at the world from different angles).

Hollywood and Hitler is a comprehensive book about an extended period of waiting in which everyone seemed to be holding their breath as the 20th century's major conflict developed. In telling the story, Doherty brings back to light elements that often get glossed over in how we talk about WWII, like the fact that a sizeable pro-Nazi contingent existed in the United States, and he goes into some detail about how the Spanish Civil War acted as a rehearsal for WWII, including how documentarians filming the conflict from the ground paved the way in terms of how armed conflicts are recorded. Hollywood and Hitler is a fascinating book about the power of film, how the Nazis attempted to harness it for their own ends (and why they mostly failed), and how Hollywood (mostly) failed to capitalize on it to turn public opinion against the Nazis and instead waited for public opinion to turn and then followed suit. The book's only weakness is that when you get to the end, you'll wish it kept going, providing a look at how Hollywood dealt with the Nazis during the war as well.

Next Month: Leni Riefenstahl: The Seduction of Genius
Posted by Norma Desmond at 8:00 AM