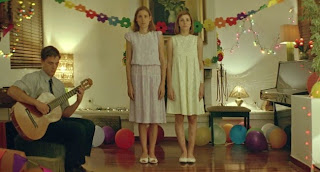 Yorgos Lanthimos’ Dogtooth is a political polemic disguised as a grotesque family drama. It is a story about iron-fisted authority, blind adherence to it and rebellion against it, and about how the institution goes about protecting itself from being undermined and destroyed. It is a supremely strange movie, and often uncomfortable to watch as Lanthimos steadily pushes the narrative further and further, engaging with the taboo and the merely bizarre, the tension rising until it seems like the film must explode off the screen. It would be difficult, if not impossible, to claim that this is a film that most people would “like,” but it is most definitely a film that leaves an indelible mark.

The members of the family at the center of Dogtooth are never named; they are at once specific characters in a specific circumstance, and an idea about how a minority population (the government) controls a majority population (the people). The film begins with a scene of indoctrination as the two daughters (Aggeliki Papoulia and Mary Tsoni) and one son (Christos Passalis) listen to a vocabulary tape, the definitions provided by the recording entirely distorted from the actual meaning of each word. The father (Christos Stergioglou) is a factory owner and the only member of the family who ever leaves the large, walled compound where the family lives, while the mother (Michelle Valley) stays on the property and keeps an eye on the children. The children have been raised to believe that the world beyond the walls of the compound is a place of great danger, and in an effort to ensure that they remain obedient their parents have told them that they once had a brother who ventured outside the boundaries of the compound and was subsequently killed by nature’s most ferocious creature – the cat.

The children are young adults, but their minds have remained fixed at the level of very young children due to their complete dependence on their parents. They are at the mercy of their mother and father, who suppress their mental growth and, unable to quell it entirely, control their physical/sexual maturation as much as possible. In an effort to keep the son from getting too restless, the parents have arranged for Christina (Anna Kalaitzidou), a woman who works in the father’s factory, to visit the compound on a regular basis in order to have sex him. But Christina doesn’t just bring sexual knowledge into the world of the children, she also brings knowledge of the outside world. Her presence, designed by the parents to meet a necessity, instead becomes a poison to the bizzaro world that they’ve created inside the compound once she brings contraband into it, exposing the children to things that haven’t been stage-managed by their parents and inspiring in them a need to explore life beyond the walls.

On its surface, Dogtooth is an extremely twisted story about an extremely twisted family, but once you begin thinking about the characters not as “Father, “Mother,” and “Children” (because of the nature of the three characters, it’s easier to think of them as one collective being, rather than three separate individuals), but as the two figures in authority who go to great lengths to keep subordinate the three figures subject to that authority, the political connotations of the film become inescapable. Throughout the film the parents actively mislead the children, manipulating language and using fear as a means of keeping them in line and, when that doesn’t work, resorting to violence. Dogtooth is a political allegory about how society functions, about the ways that those in power control the cultural narrative to supress the masses and preserve their power. From the parents’ perspective, their actions are “protecting” the children from knowledge that they are unprepared to properly process, but of course keeping the children in the dark also serves to maintain the status quo, keeping the balance of power just as it is. When Dogtooth premiered in 2009, the notion of governments doing things in secret for “the good” of its citizens, things which also happened to further tip the balance of power in that government’s favor, was potent enough. Now, in the wake of the NSA leaks and revelations of just how far governments are going to keep their populations under thumb, Dogtooth’s depiction of unchecked power is even more effective.

Dogtooth is a really weird movie. It’s so weird that I’m still amazed that it managed to advance all the way through AMPAS’ Best Foreign Language Film selection process and secure a nomination even after measures were put in place to keep the notoriously stodgy selection committee from dismissing outright the most challenging and bold films in the running. That it survived that test speaks to the power of Lanthimos' vision, to his fearlessness as a director and to the matched fearlessness of the cast. Dogtooth is a film that can be unpleasant to watch at times, but it’s so mesmerizing and so compelling that you can’t help but keep looking no matter how horrifying the depths to which it takes you.
Posted by Norma Desmond at 8:00 AM