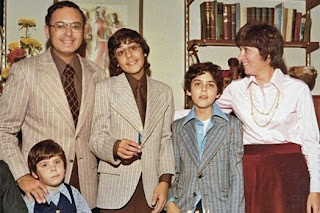 Andrew Jarecki’s Capturing the Friedmans is one of the most fascinating and controversial documentaries of the young millennium. The story of a father and son tried and convicted of sexual abuse charges, the film came under fire from victims in the case due to evidence that was skimmed over or left out entirely, and Friedmans certainly can’t make any strong claim to being unbiased given how intensely Jarecki tries to tear apart the case against his subjects. That said, though the film adopts a “did they or didn’t they” legal narrative to give itself structure, it’s really an examination of family dysfunction and how stress can both bring the members of a family together and tear them apart. Even if Capturing the Friedmans does not tell the whole story, the story that it does tell is compelling, captivating, and devastating.

On the surface, the Friedman family – father Arnold, a school teacher who taught piano and computer classes in the basement during his off-hours, mother Elaine, who tended to the house and the children, and the three sons, David, Seth, and Jesse – looked like the typical middle class family until, in 1987, Arnold was caught in a child pornography sting. When police raided the house to collect further evidence and discovered Arnold’s makeshift classroom in the basement, they began interviewing his students and quickly amassed horrific tales of abuse committed by both Arnold and Jesse, who assisted his father in his classes. During the period between their arrests and trials, when they were allowed to return home under house arrest, the family members obsessively record every moment, documenting the strain that the family endures during the period as well as the way that they rally together. David, in particular, is a vocal champion of his father and brother and Jarecki (who discovered the story by accident when he was preparing to film a documentary about children’s entertainers, including David who is a clown) adopts that point of view as well, focusing primarily on the ways that the investigation was corrupted by the methods the police used to interview the victims, amongst other things. Jarecki casts the Friedmans’ story in the light of the sexual abuse and satanic cult hysteria that swept through the United States during the 1980s and early 1990s, presenting the prosecution’s case as part of a large scale witch hunt that could result in even an innocent person being caught in the net.

But this isn’t a cut and dried case of two innocent men falsely imprisoned. Both Arnold and Jesse would plead guilty to charges laid against them and, though the film portrays Jesse as an innocent who was railroaded into serving 13 years in prison in order to avoid a sentence of 1,000 years (in addition to being a victim of abuse at Arnold’s hands), it acknowledges that Arnold, despite David’s unwavering support throughout the film, is no innocent. Whether he was guilty of all the sexual abuse charges laid against him is unclear, but he was most certainly guilty of possessing child pornography and in letters to journalist Debbie Nathan (who appears in the film), he confesses to being a pedophile and to having molested the son of a family friend. While his family may always see him as a man whose life was ruined by false accusations, it’s clear even in a film that is largely on the Friedmans’ side that Arnold was a man living two lives, outwardly living up to the image that society demanded of him, but secretly carrying out a much darker existence.

The most fascinating thing about Capturing the Friedmans, however, is not the court case at all, but the dual narrative at play within the family which basically amounted to Elaine versus everyone else. While David and Seth rally around Jesse and Arnold, Elaine has her doubts about her husband’s innocence, publicly standing by him but privately having decided that their marriage, which has long been unhappy, is over. She is isolated within the family and one of the most resonant aspects of the film is her loneliness and the undercurrent of misogyny dictating how the male members of the family treat and interact with her. In the film, David lays the blame for pretty much everything at Elaine’s feet – Arnold sought refuge in the basement because he didn’t want to have to spend time with his wife, who David describes as “crazy” and the root of all evil in the marriage. When the men in the family aren’t being openly hateful to her, they’re dismissive of her entirely, and as a result she emerges as the most sympathetic member of the family, a woman who, for all intents and purposes, was used as a prop by a husband who didn’t respect, value, or even seem to like her, so that he could present as “normal” to the outside world. This isn’t to say that Elaine emerges as perfect, but watching her get verbally battered by her family for coming to the decision that staying married to her child pornography possessing husband is a bridge too far, while that husband is spoken of in the reverent terms of hero worship, you can’t help but drift to her as the most relatable person in the film.

Capturing the Friedmans is one of those miracle films that happens almost by accident, a work that ends up coming out of an entirely different film that the director intended to make. In this case, Jarecki planned to make a film about children’s entertainers. He stumbled on the story by accident while doing research about David, and then lucked out by getting access to a wealth of home video footage shot by the Friedmans during the period in question. In that sense, Friedmans feels like a film that was destined to happen, though this should take nothing away from Jarecki’s skill in putting the pieces together into narrative form. Capturing the Friedmans is a difficult film and an unpleasant viewing experience in some ways, but it’s also an excellent documentary of a family falling apart, bit by bit, and it is utterly haunting both for the questions it raises, and for the ones that can’t be answered.
Posted by Norma Desmond at 8:00 AM