Hollywood Book Club: Let Me Off At The Top! 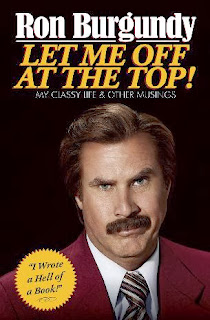 Okay, so maybe this isn't a "book," as such. "Let Me Off At The Top: My Classy Life & Other Musings," the memoir of Ron Burgundy (who frequently refers to it as a "novel," but also refers to it as a "brobalia" and "braknopod" when unable to remember the word "biography") is a movie tie-in, so you can't really judge it by the same standards as a normal book and have to give it at least a little bit of leeway. Even doing so, however, you'll come to the conclusion that the Ron Burgundy persona is best deployed through Will Ferrell rather than through the page, as the more offensive aspects of the Burgundy character are softened just enough by Ferrell's performance that it leaves no doubt of the intention behind it, whereas on the page some of it just reads as... well, offensive.

If nothing else, this braknopod will give you a renewed appreciation for Ferrell's talents as a performer. Because we tend to value dramatic performances more than comedic ones, elevating them to a higher plane in terms of difficulty and skill as if drama is "work" while comedy is "playing," comedians don't always get the credit they deserve and their accomplishments aren't always recognized as such. Ron Burgundy is a misogynist and a racist and as played by Ferrell he reaches a level of ridiculousness that's close to the sublime; we can laugh at him when he says horrible things because the joke is very clearly on him and on the notion that someone who holds those kinds of opinions should be taken seriously. That crucial underpinning is missing when the character is not being channeled through Ferrell, and so something definitely gets lost in translation in the book, at least in certain parts.

I don't know who actually wrote "Let Me Off At The Top" but I assume, given how shaggy and uneven it is, that it was assembled by a group of writers trying to collectively imitate one voice. Some of it works and is quite funny, but other parts fall flat, and the voice is inconsistent. It's weird that a book which contains a number of passages that (intentionally) read as misogynistic, racist, and/or transphobic would also contain a bizarrely sincere defense of gay rights and attack on homophobia, but this book manages to do it. Like I said at the top, though, you have to cut a book like this some slack since it exists basically as a marketing tool for Anchorman 2: The Legend Continues, and the parts of the book that do work work pretty well even if other parts come up short.

Anchorman writer/director Adam McKay recently announced that there would be no third entry in the series, which is too bad because I would be totally down with a Ron Burgundy origin story set in his hometown of Haggleworth, Iowa, a place founded by a radical sect of Mormonism based around prostitution, and resting cosily atop a series of coal mining tunnels which over the years transformed the town into the sort of hellscape usually only seen in post-apocalyptic movies. The Burgundy family, headed by Claude who "came to Haggleworth out of a deep respect for its unlivable conditions," consists of eight boys, each more thuggish and crazy than the last, who spend their days beating the living hell out of each other, all of which Ron recounts wistfully:


"I grew to like the uncertain anticipation of being pounded on by my older siblings and by the occasional explosion of fire that jumped up out of the earth. In grade school, my best friend, Casey Moinahan, and I were walking home when a sinkhole opened up and down he went into the fiery pit that was Haggleworth just below the surface... I came to recognize a kind of fluidity in life that has stayed with me from those early days. Every man takes a beating and every man gets dumped back into the earth."


When not engaged in bloodsport with his brothers, Ron attends Our Lady Queen of Chewbacca high school, much of which is located underground, a section of which possibly contains a Minotaur, and where Ron was a member of a championship basketball team (the Stormtroopers) that was later disqualified because several members of the team were actually semi-pro players from South America. As Ron explains, "Back then we had a lot of thirty- and forty-year-old men posing as high school students. It was just something you did."

I would also watch the hell out of a movie based on the recurring asides throughout the book about Ron's quickly escalating war with his next door neighbor over a borrowed leaf blower. Just putting that out there.

Next Month: back to real books with "Infamous Players: A Tale of Movies, the Mob (and Sex)"
Posted by Norma Desmond at 8:00 AM