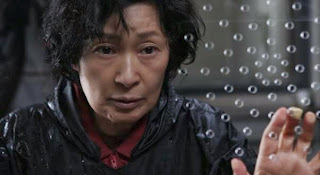 There's nothing she wouldn't do for him. He's her only child, a young man whose marginal intelligence makes him vulnerable, an easy target or an easy scapegoat. When he's arrested for murder, she begins a crusade to prove his innocence. In a conventional film, that would be the story: a strong woman fighting against the odds for her child. But Bong Joon-ho's Mother isn't a conventional film, and it doesn't take the usual roads as it heads towards its ending. Solidly constructed and anchored by a tour de force performance by Kim Hye-ja, Mother is an often fascinating and always engrossing film.

Kim is the Mother of the title, unnamed because her parental role is her identity. Her son, Do-joon (Won Bin) is grown but remains dependent on her due to an intellectual disability, and the two live alone, supported by the Mother's official work selling medicinal herbs, and her unofficial work as an unlicensed acupuncturist. As a result of his friendship with Jin-tae (Jin Goo), who both talks him into criminal activity and then lets him take the fall for both of them, Do-joon is frequently in trouble with the local police and the Mother is deeply in debt from having to bail him out over and again. When a local girl is killed, her body displayed on a rooftop, and Do-joon is taken into custody, the Mother is convinced that once again he's been framed by Jin-tae. With circumstantial evidence pointing to Do-joon, the police close their investigation after getting Do-joon to sign a confession, and the defense attorney the Mother hires has little interest in the case and wants to make a deal with the prosecution so that he can move on, so it's up to her, and her alone, to prove her son's innocence.

Playing amateur detective the Mother goes through town, doing everything from breaking into houses to collect what may be evidence to having people beaten up for information. She investigates the dead girl, eventually learning that there are any number of local boys and men might have had a motive to kill her in order to keep her from distributing videos and pictures she's collected on her phone. Meanwhile, Do-joon languishes in prison, an easy target for other prisoners, and struggles to remember what happened the night of the murder, when he spent the evening getting drunk and waiting to meet up with Jin-tae. When Jin-tae remembers a small but crucial detail about the night of the murder, the Mother follows the lead, making a discovery that startles her and changes everything. What she does as a result of this is irrevocable, turning everything in the story on its head, transforming it from a story of a mother's love for her son into a story of how people can sweep horror under the rug and choose to forget rather than redress the wrongs.

The success of Mother rests very much on its protagonist, on the ability of actress and filmmaker to make her sympathetic enough that the viewer is not only involved in her quest but wants her to succeed, while also making her enough of a force of nature that the sudden turn that happens in the third act is believable. Mother manages the task with ease, due in equal part to Kim's performance and Bong's perfect framing of it. The Mother is a woman who truly believes that all she and her son have is each other. Although there are people who help them through the course of the film, in her mind everyone else is a figure with the potential to disrupt their lives, take advantage of them, and cause them harm, whether it's in smaller ways like exposing the Mother's work as an acupuncturist, or in big ways like framing the son for murder. The world is a place of danger, and the son can only be safe when he's with the Mother, whether occupying the same room as her or just within her line of sight by hanging out across the street from her shop; when he leaves her sight, disaster occurs. She's the only one who cares and she's the only one who can save him and her singularity of purpose is the force that carries the movie forward.

Kim won a slew of awards for her performance, including the LA Film Critic's Best Actress prize, and it's a performance completely deserving of notice, but equally deserving is Won's performance as the son. Characters like Do-joon often inspire showy, capital "P" performances in actors, and though Won gets some pretty showy moments, for the most part the performance feels very lived in and conceived from the inside out. Kim dominates the story as the Mother, but Won brings something essential to the film and in their scenes together he acts as the yin to Kim's yang. The two performances, along with Bong's artful direction, make Mother a supremely engrossing film and one worth revisiting.
Posted by Norma Desmond at 8:00 AM