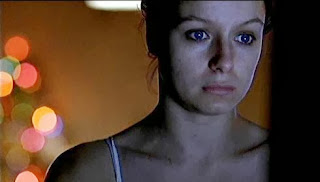 Don’t try to understand. It just seemed like the right thing to do. It’s Christmas Day and Morvern Callar (Samantha Morton) has woken up to find her boyfriend dead, his suicide note typed out on the computer, giving her instructions for what to do next. He’s instructed her to send his manuscript to a publisher and use the money in his bank account to pay for his funeral, leaving it to her to finish his life for him and secure his legacy. Instead she does nothing, and then she does everything. With its long periods of silence and much shorter bursts of energy, Lynne Ramsay’s Movern Callar is, like its eponymous character, a bit bipolar, a fascinating study in restlessness and existential nihilism, and a brilliant expression of the inner life of its protagonist.

Morvern Callar is a difficult character to parse out, at once so attached to the boyfriend who lies dead on the floor that she lies there with him, not wanting to let him go, but so detached from the situation that after she gets up off the floor she just carries on with her life without doing anything about the body, just walking around it and living with it as if there’s nothing wrong. For days she does nothing and then, suddenly, she decides to act and makes a series of extreme decisions. She dismembers her boyfriend’s body in the bathtub and then disposes of the pieces, she erases his name from the manuscript and replaces it with her own before sending it to the publisher, and then she takes the money for the funeral and decides to run off to Spain her friend, Lanna (Kathleen McDermott); it’s as if she’s decided to pick up the life her boyfriend as forfeited and live it herself.

A distinct change takes place in the film once Morvern and Lanna disembark in Spain, the color pallet of the film changing dramatically from dreary grays to vibrant, sun drenched reds and yellows. Yet, while the outer world noticeably changes, nothing can change what’s going on internally with Morvern, who is searching for meaning in life and the world, but finds that everywhere, everything, and everyone comes up short. Despite constant disappointment, she remains hopeful that she can find “somewhere beautiful,” so she keeps moving, dragging Lanna out of their hotel and taking her out to the middle of nowhere in her quest to finally feel something, only to find the same result over and over. But she keeps searching, refusing to accept that there’s nothing more to life, that, as Lanna says, “it's the same crapness everywhere.”

Morvern Callar is a film that echoes with loneliness. Although Morvern is the film’s most outwardly despondent character, everyone is suffering from the same affliction, the same lack of meaning; it’s just that others are able to distract themselves with things like sex, drink and drugs, while Morvern alone worries about how little things matter. She is unlike everyone else both because she refuses to pretend, and because she takes a stand and actively tries to find something that’s more than merely existing. She stands apart and the film stands with her, painting a brutally bleak portrait but doing so in an oddly poetic way. The film is very much carried by Morton’s amazing performance, but Ramsay’s direction supports her every inch of the way, finding a way to make the silence of Morvern’s soul part of the film’s overall texture, bringing Morvern's inner life out to the surface. Morvern Callar is a masterful pairing of actor and director and brings its story to profound, haunting heights. There aren't many characters like Morvern, nor movies like the one which bears her name. Movern Callar is a unique and deeply satisfying viewing experience.
Posted by Norma Desmond at 8:00 AM

For me, this was a game-changer as discovering it 3 years ago definitely opened up my ideas of what cinema could be.

I worship at the altar of Lynne Ramsay and hopes she can make another film as I was just amazed at what she was saying and not saying in this film. Truly a work of art.

Too true. I thought We Need to Talk About Kevin was also strong in that respect (the saying and not saying)