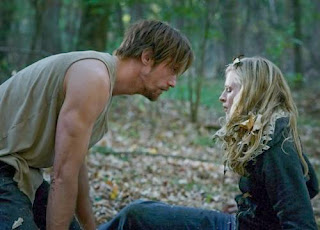 For once Netflix's recommendations were not completely insane. In addition to usual low budget horror movies that always end up rounding out the list, the list included a bit of 90s nostalgia in the form of Nell and Courage Under Fire, the recent western Appaloosa and crime thriller Pride and Glory, and a trio of 2013 films that I'd heard mixed to good things about but hadn't gotten around to seeing yet: Prince Avalanche, Drinking Buddies and The East. Since I feel like I keep hearing about how co-writer/star Brit Marling is the "next big thing," I figured I'd check out The East so that I might develop an opinion on the subject, and I've gotta say... I remain unconvinced.

Marling stars as Jane, an agent for a private intelligence firm who has been tasked by her boss, Sharon (Patricia Clarkson), to infiltrate The East, an eco-terrorist group that believes in "eye for an eye" style punishment for the owners and CEOs of corporations whose greed has ruined lives and the environment. Adopting the name Sarah, Jane sets off in search of a contact who can bring her into The East's network and finds him more or less by accident while following someone who turns out to be a Fed. The real deal is Luca (Shiloh Fernandez), who brings Jane/Sarah to abandoned house where members of The East have been squatting so that she can get medical attention from the group's doctor, Thomas (Toby Kebbell). Although her cover is almost blown when a junior member of the group catches her recording the group's activities, she's able to scare the woman not only into silence but into abandoning the group completely. The sudden departure leaves The East without a crucial member of their next planned attack, allowing Sarah to step in and prove her mettle to the group's leaders - the enigmatic Benji (Alexander Skarsgard) and the wary Izzy (Ellen Page).

The attack, in which the members of The East poison the executives and supporters of a pharmaceutical company with their own bad drug, pushes Jane into an ethical dilemma, forcing her to choose between following through on her mission or saving people from harm. She makes an attempt to have it both ways but fails and then finds herself drawn deeper into The East. When the group's next plot goes awry in the form of one of the members being shot, Jane's connection and allegiance to the members of the group solidifies, particularly in terms of her relationship with Benji, which progresses from stolen looks to physical contact. Her loyalties now firmly divided, Jane finds herself having to choose between her "real" life as Jane and her undercover life as Sarah, and decide which side - the so-called terrorists or the corrupt forces of capitalism - is the side of right.

Written by Marling and director Zal Batmanglij, The East starts out as a reasonably effective and engaging thriller and then slowly writes itself into a corner that can't be elegantly stepped out of. The third act hinges on the relationship between Sarah and Benji and the notion that they've fallen so deeply in love that Jane would potentially be willing to throw everything away for him, but Marling and Skarsgard don't have the chemistry together to pull that off. Then, to top things off, after spending the better part of two hours defining the battle as being between hard activism by people who perform illegal acts in the name of a moral right and soulless corporate entities that act in ways that are technically legal but morally reprehensible and fully in service of greed (which is mildly funny given some fairly blatant product placement for the likes of McDonald's and L'Oreal at the beginning of the film), The East concludes by creating a third option which relieves Jane from having to make an actual choice. It's a disappointingly soft ending to a film which starts so strong and seems for a time to be invested in exploring the moral ambiguities of its premise.

Although I think that The East ultimately lacks the courage to follow through on its convictions, there are a number of things about the film that I admire. Clarkson's icy but brilliant performance as Jane's boss is chief amongst them, requiring her to play a character who becomes the face of selfish corporate culture within the film. The moment when she tells Jane not to sabotage The East's plot to poison the pharmaceutical executives because the company "isn't [her] client" is one of the film's most chilling and cuts right to the profit at all cost, including the human cost, ethos that sets the stage for the narrative. Also solid is Page as Izzy, driven by the desire to atone for her father's sins and not quite as hard at her core as her surly demeanor would suggest. As for Marling, I'm not really sold on her as an actress. At times she sparks, at others she's a bit flat. I will say this, though: my feelings are mixed enough that I feel inclined to seek out one of her other films to see if that tips the scales for me one way or another.
Posted by Norma Desmond at 8:00 AM