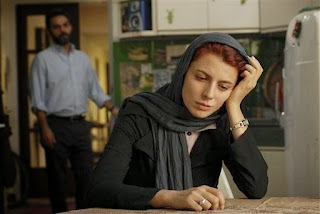 The beauty of Asghar Farhadi's domestic drama A Separation is the way that it begins with a relatively simple problem and then proceeds to build layer upon layer upon layer of complication onto it without ever toppling over under the weight of that plotting and without ever drifting into high melodrama. This is a story about people, none of them bad, but all of them with individual needs and desires that come into conflict with the needs and desires of the other characters. This is a very human story, one which puts the characters first and cares about telling you something about them, one which possesses a moral and emotional complexity that transcends political context to become something universal, and something great.

The separation of the title is in the marriage of Nader (Peyman Mooadi) and Simin (Leila Hatami), who are in the midst of divorce court proceedings as the film opens. The marriage has not broken down, per se; Simin pursues divorce but admits to the judge that she would happily stay married if only Nader would agree to leave the country with her. For her, the issue at stake is the future of their daughter, Termeh (Sarina Farhadi), which she sees as limited in Iran's current political climate. For Nader, the thought of leaving the country is impossible because his father suffers from Alzheimer's and he can't just leave him behind. Both have valid points and, objectively speaking, neither is behaving selfishly, but their conflicting and increasingly entrenched stances tear their family apart anyway and, despite the judge refusing Simin's divorce petition, the two separate. With the family's Visas expiring in little over a month, Nader declares that Simin can leave if she wants to, and Simin still holds out hope that she can convince him to join her or, failing that, at least convince Termeh to declare her desire to leave as well. The battle lines drawn, the two enter into a painful stalemate.

In Simin's absence, Nader hires Razieh (Sareh Bayat) to come during the days while he's at work to stay with his father. The job is difficult for Razieh both because of her pregnancy and because her deeply religious views make caring for an unrelated, elderly man nearly impossible. Though she attempts to find balance between her moral/religious beliefs and the requirements of the job because her family needs the money, things fall apart quickly and an incident occurs which results in Nader physically pushing Razieh out of the home and her later being hospitalized. There is nothing cut and dried about any of this and when Nader is brought up on charges and the case proceeds to court, the film examines the situation from a variety of angles, exploring the motivations and particular moral quandaries of everyone involved. Crucial questions are raised - did Nader even know that Razieh was pregnant? Does it even matter, if his actions may not have directly caused her hospitalization? Did Simin mislead Razieh's family, unthinkingly setting up an untenable situation? - but the goal of the film is ultimately not in pinpointing blame. Rather, the goal is in examining how lives and events overlap with each other, and how the smallest action can snowball, expanding out to affect others and develop consequences that can't be anticipated.

A Separation unfolds with such grace that it's almost easy to lose sight of how much nuance Farhadi gives the story. It isn't about heroes and villains, about good people and bad, or even about the class differences between the two families, though that issue is touched on. Each character is allowed to adopt a position which is logical given his or her particular situation, even when that logic proves to be completely at odds with the logical position of the other characters. The film builds methodically, each scene offering a new level of complexity and moral ambiguity until the picture is so murky that the "right" may never be separated from the "wrong." The narrative is tightly controlled in this way by Farhadi, but he manages to do this while still creating an overall feeling that is natural and organic. The characters in this film are easy to empathize with because they feel so authentic and because their shared struggle is easy to relate to. It's the struggle between what "is" right and what "feels" right, and A Separation doesn't pretend that there's an easy solution to that problem. Quiet and unassuming, but also rich and totally engrossing, Farhadi's film is an unqualified masterpiece.
Posted by Norma Desmond at 8:00 AM