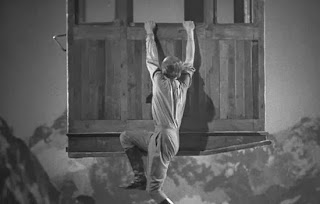 Not many films feature action set pieces involving aerial trams, which is one very good reason to see Carol Reed's WWII thriller Night Train to Munich. The other reason is that it's a zippy picture that successfully mixes thriller and comedy elements (though it's attempt at romance falls a bit flat) and proves to be a solid precursor to Reed's masterpiece The Third Man. Although parts of the film don't really hold up well in 2013, for the most part the film is a reminder of the sort of thing filmmakers used to be able to do so well, but can't often pull off these days.

The film begins with the Nazis taking Prague, Czech scientist Axel Bomasch (James Harcourt) narrowly escaping to England but having to leave his daughter, Anna (Margaret Lockwood), behind. Anna is taken to a concentration camp, where she meets Karl Marsen (Paul Henreid), a political prisoner with whom she quickly forms a bond. Together the two escape the camp and manage to make their way to London, where Anna is reunited with her father, who has been working with the Royal Navy. Using Anna's attraction to him to his advantage, Marsen gains access to her father and kidnaps them both to Germany, where he is actually a high ranking member of the Gestapo. Once back in Germany, Bomasch is blackmailed into working for the Nazis under threat that Anna will be sent back to a concentration camp if he refuses.

Back in England, Bomasch's former handler Dickie Randall (Rex Harrison) formulates a plan to rescue the Bomaschs. He goes into Germany and poses as Major Herzog, an engineer with past ties to Anna who convinces those holding the Bomaschs to allow him to transport them to Munich, where they'll make their escape to Switzerland. Though Randall's ruse is successful, Marsen insists on accompanying the party on the journey, his suspicions about Herzog steadily growing. Though Marsen discovers the truth about Herzog in time to plan an ambush once they disembark in Munich, his plot is uncovered by Caldicott and Charters (Naunton Wayen and Basil Radford), two Englishmen trying to get out of Germany (one of whom has sadly come to accept that the golf clubs he loaned to a German friend will likely never be returned now that war has officially been declared) who join forces with Randall. With a bit of fast thinking and trickery they get their chance and make a break for the Swiss border, but the Gestapo are quick on their heels, leading to one of the more original chase pieces in movie history.

Night Train to Munich is a film which, until a few years ago when its Criterion release revived interest in it, seemed to have all but disappeared from film conversation. This is due, in part, to the fact that it has long lived in the shadow of the more well-known The Lady Vanishes, the Alfred Hitchcock film with which it shares a leading lady, screenwriters, and the characters of Charters and Caldicott. It's also due, I think, to the lack of chemistry between Harrison and Lockwood (which is only underscored by the very real chemistry between Lockwood and Henreid, who plays a kind of anti-Victor Laszlo here), who are supposed to be a couple who start out detesting each other but fall in love during the course of their adventure and instead seem merely like they've come to tolerate each other, and by some of the creakier aspects of the climactic finale. The shootout between Randall and Marsen plays a bit silly today because it basically consists of the two characters taking turns carefully taking aim at each other and then firing, and the novelty of the aerial trams piece is somewhat undercut by the less than stellar effects work. Reed himself was dissatisfied with the models used in the sequence, but had to make due with the resources available to him at the time, when the war had begun and resources were becoming scarce.

Still, though the sequence doesn't look "real," there's something charming about it nonetheless, just as the film as a whole is rather charming. Although dealing with a heavy subject, the film itself it never heavy handed, proceeding with an admirable lightness of touch which allows it to unfold as a rousing adventure story. The dryly funny scenes involving Charters and Caldicott, who become more and more put out as they're shuffled to and fro on trains and in train stations by Germans, play nicely against the higher stakes drama playing out between Randall, Marsen and Anna, and the film moves efficiently from one set piece to the next, making it all look deceptively easy. While not as well known as some other films of its era, Night Train to Munich is a hidden gem.
Posted by Norma Desmond at 8:00 AM