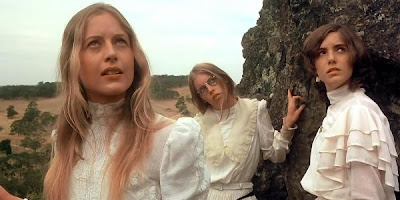 On Valentine's Day, 1900, three teenage girls and one teacher disappear while on an outing to Hanging Rock. There's no sign of a struggle, no evidence of a crime - but something must have happened to them, something sinister, something... unsettling. Such is the premise for Peter Weir's Picnic at Hanging Rock, based on the novel of the same name by Joan Lindsay. A mystery story more interested in the nature of mystery than in the mechanics of solving a mystery, Hanging Rock is a gem of its era and one of the best films from one of the most consistently great filmmakers working today.

The story begins at Appleyard College, a boarding school in Victoria, Australia, where the students are preparing for a day trip to Hanging Rock under the care of math teacher Miss McCraw (Vivean Gray) and French teacher Mademoiselle de Poitiers (Helen Morse). All of the students will be going save one, Sara (Margaret Nelson), an orphan who has earned the enmity of the school's headmistress, Mrs. Appleyard (Rachel Roberts), and as a result has been told that she isn't allowed to go.

The day at Hanging Rock passes in dreamy fashion until four girls - Miranda (Anne-Louise Lambert), Irma (Karen Robertson), Marion (Joan Vallis) and Edith (Christine Schuler) - set off to explore the rock. They get to the top of the rock and, after taking a rest, Miranda, Irma and Marion, seemingly in a trance, move into a recess in the rock face. Edith, helpless to stop them, runs screaming down the rock and when the party returns to the school several hours later, Mlle de Poitiers informs Mrs. Appleyard that Miranda, Marion, Irma and Miss McCraw have all gone missing. The police are called and a search conducted, but it turns up nothing.

An unofficial search is also conducted by Michael Fitzhubert (Dominic Guard) and his valet, Albert (John Jarratt), who were also at Hanging Rock that day and spotted the four girls from afar. Michael becomes obsessed with the girls (Miranda in particular) and spends a night at Hanging Rock, finding a fragment of a dress. Retracing Michael's steps, Albert eventually finds Irma, who is alive but has no memory of what happened to the others. The search continues, but little ground is gained and the frustration of not knowing - not to mention the fear - begins to weigh heavily on the characters. Three people can't just disappear into thin air - and, yet, it appears that that's exactly what happened.

If you find movies with unresolved endings to be an exercise in frustration, it's probably best to avoid Picnic at Hanging Rock. It isn't a proceedural story which follows an investigation; it's more concerned with how the mystery affects the characters, how not knowing what happened to the girls adds to the underlying sense of hysteria already present in the hothouse environment of the boarding school. The suggestion of sex occurs through the inclusion of Michael and Albert - who watch the girls for a while at the rock - and through Michael's growing obsession. Could they have assaulted and killed the girls? If they did, where are the bodies? And how did Irma survive, seemingly without a scratch on her?

Irma's survival raises more questions than answers, and further emphasizes the unspoken sexual current that runs through the film. Her corset is missing, for one thing, and when she finally recovers enough to return to the school to say goodbye to her classmates, the virginal white dress she (like all the other students) wore at the beginning of the film has been replaced by a dress of deep red (not coincidentally, Miss McCraw was wearing a red dress the day of the trip to Hanging Rock - the only female character not clad in white), and her presence causes a near riot among her classmates, who swarm her and demand to know what happened at the rock. This gives way to Mlle de Poitiers discovery that Mrs. Appleyard has had Sara strapped to a wall in order to correct her posture - an act which itself has unmistakable sexual undertones.

Weir keeps tight control of the story, building on an already claustrophobic premise and closing it off even more. He moves the film at a slow, almost hypnotic pace, one which, like the unresolved ending, will make it unbearable to some viewers. If, however, slower paced, largely plotless, character films are your thing, you can't do much better than Picnic at Hanging Rock, which remains an intriguing piece of work.
Posted by Norma Desmond at 8:00 AM

I watched this when it first came out on Blu-ray here and in HD it looks incredible. Found it fascinating, a touch unsettling and a really brave work but there's also the fact hanging over it that its a touch plotless; the lack of procedure is one thing but Weir is so unconcerned with form and so concerned with the things you mention - the suggestion of some sort of sexual assault and the element of mystery as a topic in itself - he almost forgets the rest. Still find myself thinking about it though. Enjoyed your review.

Yeah, I enjoyed the film but I can easily understand why it would be a frustrating experience for someone else.