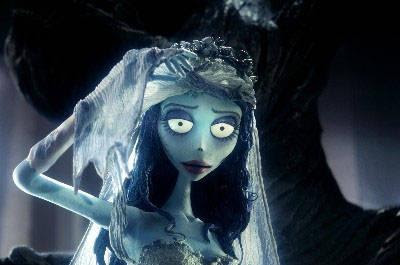 For a film about the living dead, The Corpse Bride is actually pretty sweet. The story of a meek groom and his two brides - one living, the other dead; neither of whom he becomes betrothed to by choice - told through stop-motion animation, the film is reminiscent of Burton's The Nightmare Before Christmas, but with a little less edge. Fortunately, it still has plenty of charm.

Set during the Victorian era, The Corpse Bride opens with Victor (Johnny Depp) being pushed by his nouveau riche parents into marriage to Victoria (Emily Watson), an aristocrat whose family is on the brink of financial ruin. Despite these less than romantic circumstances, when Victor and Victoria finally meet, they quickly fall in love and their outlook regarding their arranged union becomes decidedly more positive. Suddenly they want to be married, but Victor's poor performance at the wedding rehersal threatens to spoil the plans and he's sent away to practice his vows so that he can recite them perfectly at the actual ceremony. Victor goes into the woods, where he recites his vows and places the ring on a tree root sticking out of the ground, only to discover that the root is actually the finger of a dead girl who now believes herself to be married to Victor.

The corpse bride is Emily (Helena Bonham Carter), who takes Victor to the Land of the Dead and reveals that she was murdered years ago on the night of her elopement, her husband-to-be having killed and robbed her. Emily is determined that with Victor she'll have the life (or the "unlife") she'd always dreamed of and is furious when she realizes that Victor has tried to manipulate her into releasing him back into the world so that he can reunite with Victoria. Meanwhile, Victoria's parents, believing that Victor has run off with a mystery woman, have made arrangements for her to marry someone else in Victor's place - a mysterious newcomer named Lord Barkis Bittern (Richard E. Grant). Believing that Victoria is now lost to him, Victor decides to make the ultimate sacrifice by ending his life so that he can spend eternity with Emily.

Written by John August, Caroline Thompson, and Pamela Pettler, The Corpse Bride zips along through its, admittedly, fairly basic plot, punctuating sequences with musical numbers and dark humor. The animation is gorgeous (even the various grotesqueries of the undead characters are beautifully rendered) and the film moves with an incredbile amount of grace - enough that the little world the film has created seems alive and even lively, despite the film's dark colour pallet. It's a visually arresting piece of work that finds beauty in the most unusual of places.

As Burton/Depp/Bonham Carter joint ventures go, The Corpse Bride is pretty great. It isn't quite the classic that The Nightmare Before Christmas is, but it's a lovely little movie with plenty to recommend it.
Posted by Norma Desmond at 8:00 AM

This is my favourite Tim Burton film although I am not really a big fan of his.

It's probably the only Danny Elfman score I really like too