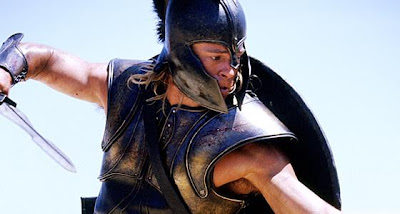 Never has the word "loosely" been more necessary as a qualifier. Loosely based on the Iliad, Wolfgang Petersen's Troy quickly abandons any pretense towards prestige and announces itself as a by the books action epic. Even laying aside the objections of purists to changes in the story, Troy never gets around to justifying its own existence, choosing instead to be just another bloated Hollywood production.

Troy begins with Trojan Prince Paris (Orlando Bloom) and Spartan Queen Helen (Diane Kruger) running away together, sparking antiquity's most famous international incident. Helen's husband, Menelaus (Brendan Gleeson) demands vengeance, which his brother, Agamemnon (Brian Cox) is all too happy to provide by calling upon the armies of Greece to invade and conquer Troy. A thousand ships set sell, including those carrying legendary heros Achilles (Brad Pitt) and Odysseus (Sean Bean), and land on the beaches of Troy, where they're greeted by the Trojan army led by Paris' older brother, Hector (Eric Bana).

Much fighting ensues and many fall at the hands of both Achilles and Hector, who are quickly established as the greatest fighters on either side, thus setting the stage for their eventual showdown. That showdown occurs after Hector kills Patroclus (Garrett Hedlund), whom he had mistaken for Achilles, and Achilles proceeds to go insane with grief, eventually killing Hector in a one-on-one fight that brings the rest of the war to a complete halt. Though the Trojans have lost their best fighter, they still have the advantage of being behind a wall that the Greeks can't breach - unless of course they can come up with a way to be invited inside (cue giant wooden horse).

The problems with Troy as a narrative are legion, but not necessarily the fault of screenwriter David Benioff (I say that given that he's the writer behind 25th Hour, Brothers and many episodes of Game of Thrones). In all likelihood the problems stem more from the near impossibility of doing an adaptation of the Iliad that is both faithful and marketable. For one thing, Homer's epic doesn't begin at the beginning of the Trojan war, nor does it end at the close of the war. It's a portrait of a significant series of events of the war, but not a "proper" story within Hollywood terms. I mean, if you're going to shell out hundreds of millions of dollars to tell a story set during the Trojan War, you're not going to leave out the part with the horse, right? You're also, in all likelihood, going to end up sacrificing the pscyhological complexity of the source in order to focus on big, CGI enhanced battle scenes. And why not? The status of the source as one of the greatest works of the Western canon will be more than enough to provide a base of respectability - and attract a few choice actors to lend the project legitimacy - to allow the project to make a shallow claim towards being a "prestige" picture, even if it actually falls far short of being good.

I saw Troy when it was first released in theaters and left mostly annoyed at many of the changes to the story (for example, why must everyone suddenly be someone's cousin?). Seeing it now, I'm surprised by just how poorly it has held up, even by the standards of action epics. For the most part the actors are fine (in 2004 I didn't care for Bloom's depiction of Paris but, in hindsight, it's probably the part that's most "true" to the source), though the film does them no favors with its many moments of unintentional hilarity (Pitt screaming "Hector!" outside the Trojan walls once or twice might be effective; having him do it, like, seventeen times is just asking to be made fun of). The film also does them no favors by cutting down the characters to their most basic components, allowing each to have exactly one note in order to make room for more action.

At the end of the day, I think that Troy's failure as a film is a prime example that bigger isn't necessarily always better. Watching it, you get the distinct feeling that at every turn someone behind the scenes was saying "more," even though the film was already filled to the brim. It's not a mess on the same scale as, say, Alexander (which came out the same year and is damn near unwatchable), but it's still a pretty ridiculous movie.
Posted by Norma Desmond at 8:00 AM

UGH yes I hated this movie!! They take out all the exciting fantasy aspects of the story (e.g. the gods, prophets, sea monsters) and replace it with a poorly constructed melodrama in which every actor puts on a terrible fake accent, delivers over-wrought speeches, and generally acts in a completely unnatural way.

The one obvious exception would be Peter O'Toole. He's just in a completely different league than everyone else in the movie, and makes them look even worse by comparison. His delivery of the boatman/burial rites monologue was incredible and belonged in a better movie. (I also thought Rose Byrne was great, despite her role as a tawdry romance-novel heroine)