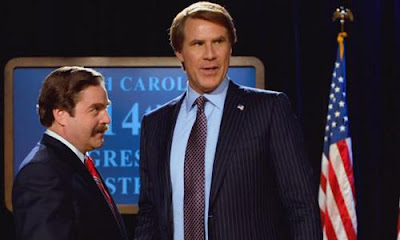 Politics is a dirty business, particularly when the two candidates are almost equally incompetent. The Campaign, directed by Jay Roach (director of the Austin Powers films), is never really sharp or astute enough to be a true commentary on modern politics, but it's funny and well-crafted enough to be a decent commentary on the idea of politics as portrayed on film. Plus, Will Farrell and Zack Galifinakis are in top form, making this a film definitely worth catching as the summer movie season winds down.

The Campaign concerns the battle for North Carolina's 14th District, where Democratic Congressman Cam Brady (Farrell) anticipates sailing into his fifth term in office by virtue of there being no other candidates. Seemingly incapable of resisting the opportunity to snatch defeat from the hands of victory, Brady's campaign takes a nose dive after he's caught leaving a sexually explicit phone message on a local family's answering machine, having meant to leave the message on his mistress' voice mail. As his support numbers plummet, the wealthy and powerful Motch brothers (John Lithgow and Dan Aykroyd) decide to finance a Republican candidate, whom they can manipulate into selling the District to the Chinese so that the Motches can make a tidy profit.

The Motches set their sights on Marty Huggins (Zack Galifinakis), a harmless tourism director and son of their wealthy associate (Brian Cox). After his first steps into the race prove disastrous, the Motches send in Tim Wattley (Dylan McDermott) to take over his campaign, transforming Marty from a gentle, loving family man and pug owner, to a politician ruthless enough to shoot his rival (granted, that rival first seduces Huggins' wife, tapes it, and uses the footage for a campaign ad) and skilled enough to get away with accusing him of being a Communist based solely on a story written when he was in second grade (not to mention ditching the pugs for dogs of a more popular breed). The only problem is that Huggins doesn't much like the person he's become and, unlike Brady, he actually does care about making a difference for his community and doesn't react well to finding out that it's about to be sold to China.

Neither Farrell nor Galifinakis does much new here - Brady is a reprise of Farrell's version of George W. Bush with just a dash of Bill Clinton; whereas Huggins will be familiar to anyone with a passing awareness of Galifinakis' stand up and his character "Seth Galifinakis" - but nevertheless both get a great deal of mileage out of the characters. They balance each other well and neither of them does comedy by half measures; they both go for it at all times, even if that means punching an infant and a dog (I'm sure I'm a bad person because I laughed at the baby punching but not at the dog punching, but in my defense the dog is Uggie from The Artist).

Written by Chris Henchy and Shawn Harwell, The Campaign has a lot of laughs but falls apart somewhat at the end. While it is content to spend most of its running time indulging in the worst of human nature (I mean, baby punching!), it goes to great pains to soften its considerable edges in its final act, opting for a mushy Hollywood ending. It remains funny to the end, it's just that it becomes very conventional and very safe.
Posted by Norma Desmond at 8:00 AM

I dont blame them for going the safe route in the end, can't bash on politics too badly in this town (I mean Hollywood), but I'm glad to hear it's a funny film, actually looking forward to seeing it. Thanks!