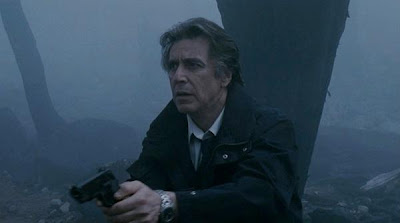 Although I'm a definitely a fan of Christopher Nolan, his 2002 thriller Insomnia has somehow eluded me until now. Seeing it ten years after the fact (and seven years after Nolan began his ascent as one of our most dependable producers of high brow blockbusters), I found it to be a singularly entertaining and captivating piece of work. It's not quite on par with Memento, which I think remains his masterpiece, but it's a great psychological thriller.

The film takes place in a small fishing village in Alaska, where the murder of a teenage girl has prompted the local police to seek outside help. LAPD detectives Will Dormer (Al Pacino) and Hap Eckhart (Martin Donovan) arrive and begin looking at the evidence, though they remain preoccupied with the Internal Affairs investigation that's underway back home which may result in Dormer's considerable reputation being forever tarnished. That reputation has preceded him to Alaska, where police officer Ellie Burr (Hilary Swank) has been eagerly awaiting his arrival and looks at him as though he's the second coming.

Dormer comes up with a plan to lure the murderer out but instead of catching the culprit, the police end up pursuing him through the fog, which results in Dormer accidentally shooting Eckhart. Eckhart dies almost immediately, convinced that Dormer shot him on purpose to prevent him from giving evidence in the Internal Affairs investigation, and Dormer covers up his action by letting everyone believe that it was the killer who shot Eckhart. Dormer's guilt over the shooting (and his own uncertainty about whether it was truly an accident), and the perpetual daylight of the season, exacerbate the insomnia that Dormer was already suffering from and he begins to get increasingly unhinged. By the time the killer (Robin Williams) begins to contact him, Dormer is already far enough on his way down the rabbit hole that he's willing to make a deal to frame the victim's boyfriend for the murder in exchange for the killer helping to bury the truth about Eckhart's shooting.

Lensed by Nolan's longtime collaborator Wally Pfister, Insomnia has a moody feel made all the more unsettling by the fact that much of the film is flooded with light. Dormer needs the dark, not just so that he might finally be able to get some sleep, but so that he can hide, both literally and figuratively. Things that ought to happen in the dark - such as Dormer attempting to destroy or otherwise get rid of evidence - have to occur in bright daylight, which adds to the film's sense of unbalance. The further along the film gets, the less Dormer seems to know what's real, his lack of sleep and feelings of guilt causing hallucinations and causing him to lose control. Nolan handles this element in an effective way, using it to bolster the atmosphere rather than letting it totally take over the narrative.

The film is also aided by the casting. Pacino, who is no stranger to playing cops or morally dubious characters, is perfect as Dormer and he plays well off both Williams and Swank. Williams' performance is appropriately understated and creepily intense, a great reminder that when he truly wants to do something interesting and different, he can be a really effective actor (see also One Hour Photo). Swank, who often gets flack for having a lack of range, is also great here as the cop with a serious case of hero worship. Her first scene in the film totally sets the tone for the relationship between her character and Dormer, nicely foreshadowing how the potential moral shift that confronts her character at the end comes about.

Although I typically argue against the necessity of English language remakes of foreign films, Insomnia is a film which gives me second thoughts on the subject. I haven't seen the Norwegian film (also called Insomnia) on which it's based, but it has now shot to the top of my "to see" list.
Posted by Norma Desmond at 8:00 AM

I can't believe I've missed seeing this movie. It sounds right up my alley, and I LOVED Memento.