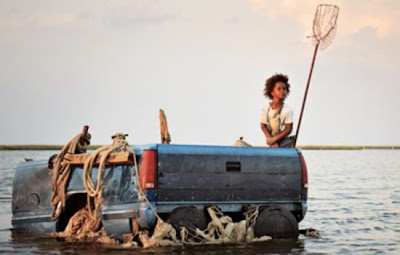 Sometimes a film has to sit with your for a while before you grasp how special it is, and sometimes that specialness is immediately apparent. Such is the case with Ben Zeitlin's Beasts of the Southern Wild (adapted by Zeitlan and Lucy Alibar from Alibar's play "Juicy and Delicious"), a vibrant and fiercely original fantasy drama. I strongly suspect that come the end of the year, this is a film we'll see on a lot of critic's lists and picking up a lot of awards.

Set in a world like our own but slightly more extreme with respect to the climate situation, Beasts of the Southern Wild centres on Hushpuppy (Quvenzhane Wallis), a six-year-old girl living in a community known as "the Bathtub" and located beyond the levee, where the waters threaten to rise. Hushpuppy lives with her father, Wink (Dwight Henry), a sickly alcoholic whose brief disappearance signals the beginning of the end for life in the Bathtub. Hushpuppy carries on as best she can, holding tight to what little she has left of her mother, who disappeared when she was a baby, and to what remains of the community, which has been greatly reduced by the melting of the ice caps and the threat of rising waters.

As the storm hits, the Bathtub floods and forces its remaining inhabitants into boats. Wink, Hushpuppy and the other members of the Bathtub carry on as best they can, developing a plan to rid themselves of the water, which is killing the plant and animal life that once existed around them, and resisting attempts from the people beyond the levee to evacuate them to safety. With Wink's health failing fast, Hushpuppy ventures out in search of her mother, whom she believes lives beyond the water. Meanwhile, the change in climate has also resulted in the release of an army of prehistoric creatures called aurochs from their long, frozen sleep, and sends them on a collision course towards the Bathtub.

Shot on 16mm (and beautifully photographed by Ben Richardson), Beasts of the Southern Wild has an intimate feeling that immediately draws the viewer in. This feeling is sustained by the screenplay which, despite focusing on a child and taking place within the realm of fantasy, is decidedly unsentimental. Although Hushpuppy seems mostly happy to be living in the Bathtub, there are a lot of dark undercurrents to her life there, even laying aside the imminent danger of the rising waters. Wink, because of his illness and his drinking, is not a reliable caregiver and is prone to abrupt shifts in mood and temper, often lashing out at his daughter. There are moments between the two characters which are startling in their intensity and it's to Zeitlin's credit that the film never shies away from that and allows itself to build to moments which feel natural, even if they're moments of ugliness.

Films for adults which centre on child protagonists can really go either way, particularly films like this one which focus on a child, but don't necessarily see the world through his or her eyes. Wallis, making her film debut, is a real find, delivering a charismatic performance which shifts from childish wonder to wisdom beyond her years and she gives Hushpuppy the core of strength which makes her such an engaging character. Henry also makes his film debut as Hushpuppy's father and delivers a confidant and well-rounded performance that keeps Wink from ever being two dimensional.

Beasts of the Southern Wild is a film in which all the elements come together beautifully. It's perfectly acted, well-written and directed, and beautiful to look at. If it doesn't end up being a consensus choice for one of this year's very best films, I'll be incredibly surprised.
Posted by Norma Desmond at 8:00 AM

What a lovely review. I've been on the fence about whether to see this one, and you may have just pushed me off the fence. ;-) And I agree that some movies have to sit with you for a while before you fully appreciate them.