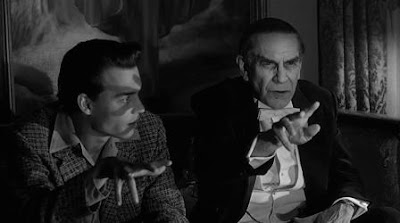 It's sometimes hard to remember now, when their colaborations have become increasingly soulless and empty, but Tim Burton/Johnny Depp movies used to be as genuinely interesting and meaningful as they were stylistically odd. Ed Wood, a loving tribute to history's "worst filmmaker," is a movie about misfits, a visually interesting piece that doesn't sacrifice the story or the characters to that visual aspect. It's one of the best films in either Burton or Depp's filmographies, and still somehow seems special nearly 20 (!) years after it's initial release.

How best to describe Ed Wood? Technically he's a filmmaker - though in the film's depiction of him the actual filmmaking process doesn't much interest him, given that scenes only ever seem to get one quick take and then it's on to the next thing - and secretly (less so, as time goes on), he's a crossdresser. He's probably best described as an "entertainer" whose enthusiasm never wavers, even when confronted with mobs of people made angry by what Wood has presented to them as "entertainment." The film begins in 1952, with Wood (Johnny Depp) struggling to get his break into the film industry. When he learns of plans to make a film of the life of Christine Jorgensen, he becomes desperate to direct it, feeling an affinity for the character. His own film becomes "Glen or Glenda" and stars, in addition to himself in the title role, Bela Lugosi (Martin Landau), his longtime idol.

Wood and Lugosi meet by chance, when the former finds the latter trying out a casket, and quickly develop a friendship. Lugosi is by that time long past his movie star prime, assumed by most people to have long since died, and too far down the road of addiction to turn back. Though he dies before Wood can make Plan 9 From Outer Space (the famed worst movie ever made), that doesn't stop Wood from including him in it by using old footage and hiring his girlfriend's (Patricia Arquette) chiropractor to act as a stand-in for him. Making the film proves difficult, as it's being funded by devout Baptists who want to change pretty much everything about it and take particular offense to the idea of Wood filming while wearing a dress but, after a heart-to-heart with Orson Welles, Wood realizes that "visions are worth fighting for" - even if those visions lead to singularly awful movies.

Ed Wood is right up there with Edward Scissorhands as the sweetest of Burton's films. Although the film is a comedy and gets a lot of mileage out of Wood's delusions of grandeur and his seemingly endlessly ability to look on the bright side (when reading an early review that pans everything but the costumes, he exclaims, "I've read reviews that don't even mention costumes!"), it isn't really making fun of him. The talent may not be there (and it may not actually be a matter of "talent" so much as "patience;" as I said before, he's always shown rushing towards the next thing that he never bothers with more than one take), but his passion is depicted as something to be admired, not mocked.

The film is similarly loving in its depiction of Lugosi, who went from being a super star of monster movies during Hollywood's Golden Age to a long, slow decline in poverty row movies. Although the film obviously takes liberties with reality (as all "based on true events" stories do), the film, and Landau, make the Lugosi character very real. Landau would go on to win an Oscar for this performance and it's easy to see why. Where so many performances of this type slip into parody, Landau keeps it very grounded and the performance, while funny, is also very touching.

Ed Wood is, undoubtedly, an odd film (perhaps not "odd" by Burton standards, but still), but it's also an entirely lovable one. It still feels fresh and vital and continues to be a film well worth watching.
Posted by Norma Desmond at 8:00 AM