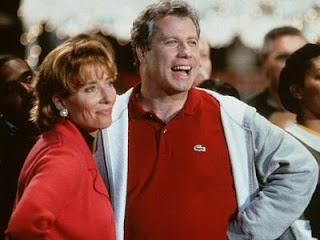 #5: Primary Colors
A thinly veiled (and "thin" seems generous) portrait of Bill Clinton's first presidential campaign, Mike Nichols' Primary Colors isn't a perfect film but it is an entertaining one. 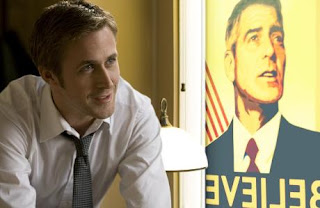 #4: The Ides of March
George Clooney's The Ides of March is a solid political thriller with a great performance from Ryan Gosling in the lead. The film boasts one of the best endings of 2011 (seriously, that final shot of Gosling is absolutely haunting) and deserved more recognition than it actually got during awards season. 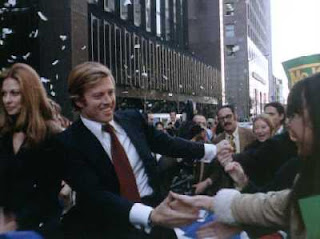 #3: The Candidate
A shockingly prescient film possessed of the kind of cynacism about American politics that you didn't often see in pop culture until after Watergate (in a very technical sense the film did come out post-Watergate, but only 12 days after the break in). It's a great film and one of the best from the richest period of star Robert Redford's acting career. 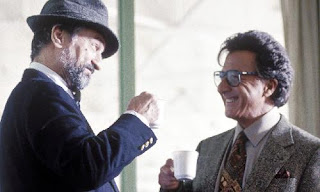 #2: Wag the Dog
One of the best films of the 1990s, hands down. That it only received two Oscar nominations (a Best Actor nod for Dustin Hoffman and a Best Adapted Screenplay nomination) blows my mind. Sad as it is to say, Wag the Dog pretty much marks the last time Robert De Niro was in a movie that was actually, you know, "good." 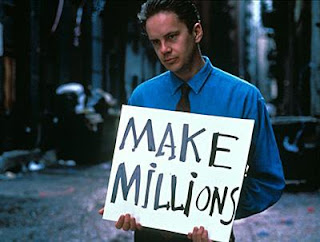 #1: Bob Roberts
A brilliant satire written, directed by and starring Tim Robbins. I can't praise this film highly enough. If you've never seen this one, find some means of doing so.
Posted by Norma Desmond at 6:15 PM

Unfortunately, it's been so long since I saw Wag the Dog that I barely remember it. I should re-watch it sometime. The other movies on your list are worth checking out, too.

I've seen all but your # 1 choice, and they're all good picks. I re-watched WAG THE DOG recently for a blogging project, and realised how daring a film it is, while still being palatable enough for mainstream (a positive thing).

(Naw, De Niro was in ANALYSE THIS which was good.)

Nice list. LOVE Wag the Dog. Seriously, how ironic is it that that film came out mere months before the Clinton/Lewinsky scandal?