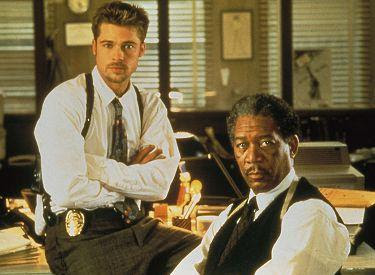 Seven wasn't David Fincher's first feature film (that would be Alien 3), but it was the film that announced him as one of the defining directors of his generation. In lesser hands, Seven could have been just another gimicky thriller, a dark police procedural not unlike hundreds of other films of the genre. Instead, it's one of the greatest thrillers of the 90s, perhaps even of all time. Suffice it to say, going from Alien 3 to Seven is pretty much the exact opposite of a sophomore slump.

In an unnamed, rain-swept city, soon-to-be-retiring detective William Somerset (Morgan Freeman) meets his new partner, David Mills (Brad Pitt), and begins investigating a series of murders based on the seven deadly sins. As the victims mount up (each dying in a more horrific way than the last) and it becomes apparent that the killing spree is part of a long-range plan on the part of the killer, Somerset and Mills sink deeper and deeper into the investigation, trying to capture the man they refer to as John Doe. John Doe, however, is always one step ahead and is never "caught;" he simply folds the police into his game, proving himself to be the ultimate puppet master.

As the investigation begins to take over their lives, Somerset and Mills begin to develop a friendship which leads to Somerset becoming a confidant to Mills' wife, Tracy (Gwyneth Paltrow). The marriage is going through a difficult period, with Tracy unhappy about the move to the city and worried about the prospect of raising children there. She's so worried that she hasn't told her husband about her pregnancy and is considering having an abortion, a secret which Somerset keeps on her behalf and which will figure in John Doe's climactic coup de grace.

There's a lot about Seven that's basic genre boilerplate, from the "creative" serial killer, to the pairing of the stoic, often silent senior partner and the hot-headed younger cop, to the rainy, decomposing setting. It's Fincher's masterful direction that really raises the film to the next level, transforming it from standard to seminal. Gore is easy, and darkness is a feature of just about every other movie; Fincher brings feeling to the images, a sense of dread, a tangible sense of the moral decay that is being reflected in the city itself. One of the reasons why Seven was and remains so powerful is that it actually engages with moral questions rooted in its premise, rather than simply using the seven deadly sins as a shallow narrative device. The film's ending is not just a last minute twist; it's a complex and psychologically shattering finale that puts humanity itself under the microscope, asking where the breaking point lies.

Anchoring the story are the performances by Freeman and Pitt, both of which are solemn, but in different ways. Freeman's Somerset has the world weariness of a survivor, someone who has seen more than anyone should and just keeps going. Pitt's Mills, particularly as the film reaches the end, is more shellshocked, realizing that there may be more evil in the world than he's quite prepared for. The two play off of each other very well, making it somewhat surprising that in 16 years no one has ever paired them up again. Then again, it can certainly be argued that the point was made with just one film - one terrific, enduring thriller of a film.
Posted by Norma Desmond at 8:00 AM