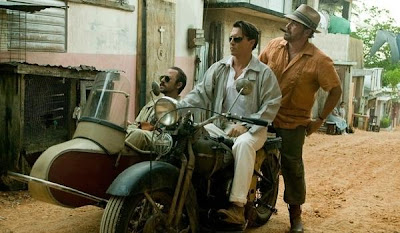 The Rum Diary has the feeling of being a labour of love. Originally set to begin filming in 2000, the project ended up stuck in development hell until finally being filmed in early 2009 and then having its release delayed until now. The novel on which the film is based has a similar history, having been written by Hunter S. Thompson in 1961 but not being published until 1998. The film version plays like a love letter to Thompson, but one which unfortunately never reaches a level of cohesiveness that matches its affection.

Johnny Depp stars as Paul Kemp, an aspiring novelist newly arrived in Puerto Rico to write for the San Juan Star, a paper on its last legs. After pushing the limits of his new employer's hospitality by drinking his way to a large bill at the hotel the Star is paying for, Paul moves in with Bob Salas (Michael Rispoli), the paper's photographer, with whom he shares various drunken adventures. The pair is sometimes joined by Moberg (Giovanni Ribisi), who also works for the paper but never shows up in the daytime because if he does, he'll get fired, and is the sort of drunk who drinks so much that his bloodstream is pretty much 90% alcohol at all times.

Shortly after arriving in San Juan, Paul meets Sanderson (Aaron Eckhart), a powerful wheeler dealer who brags that while a lot of people know how to make money on the island, he knows how to get it out. Sanderson is involved in a plot to buy up land to build hotels and wants to hire Paul to help by writing brochures that will sell people on the idea. The more he learns about the plan, and the more he begins to see how the locals are suffering as a result of the development of the island into one giant tourist haven, the less Paul wants to be involved but he finds himself continuously drawn back to Sanderson due to the charms Sanderson's fiancée, Chenault (Amber Heard).

Depp's performance transitions easily between suave and smooth and down and dirty, his character equally at home in sports jackets and with his hair slicked back, and looking like he's coming out the other side of a months long bender. His ability to move between different worlds is further emphasized by the company he keeps, with Bob and Moberg representing the shabby, rough and tumble end of the spectrum, and Sanderson and Chenault representing the more glamorous other side. Although Eckhart and Heard are good in their respective roles, the film only really comes alive in the scenes Depp shares with Rispolo and Ribisi, both of whom render great performances. If the film had focused more on the adventures of Paul, Bob and Moberg (or, alternately, if it had focused more on developing the hotel plot and love triangle), it would have been a much better, move cohesive film.

Although not really connected to 1998's Fear and Loathing in Las Vegas, since both films are based on novels by Thompson and star Depp as characters who are Thompson stand-ins, The Rum Diary does end up seeming like a pseudo-prequel. However, while Fear and Loathing worked in large part because director Terry Gilliam's surreal stylization captured the spirit of Thompson's writing style, part of the reason why The Rum Diary doesn't work is that the visual style is so straight forward that rather than seeming like a fever dream, the film just rambles from one adventure to another in search of something that can connect its disjointed parts. The film never really decides what it wants to be about and so it feels like the beginning of several stories that never end up going anywhere. There are moments when The Rum Diary feels like it might start to come together, but ultimately its just a bunch of loose threads winding around each other but leading nowhere.
Posted by Norma Desmond at 8:00 AM

This film was made in Puerto Rico, I saw it being filmed and it was a special thrill for me to see this happen. They put old cars all over old San Juan, it was fun to watch.

Im kind of saddened by the fact that you found it kind of a mess in terms of themes.

totally agree with you no Terry Gilliam being essential to making Fear and Loathing work as a film, Gilliam's own style of filmmaking matched perfectly with the material. Bruce Robinson is a great director on his own right, and he did make Withnail and I, a film that had a lot to do with alcohol and drugs, but his not a stylist like Gilliam.

In the end, it's just a day in the life of Hunter S., with him commenting on how Puerto Rico was at the time, on how the U.S. saw it as a "booming" place for business back in those days, and how he though it was going to ruin a beautiful, wild, place.

Also of course it's about Thompson's crazy unpredictable lifestyle which is part of what makes his stories fun. Im looking forward to seeing this one!