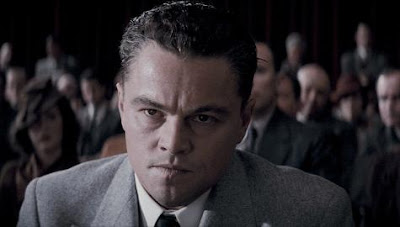 On Friday Clint Eastwood's J. Edgar hits theaters and with it the Oscar season truly gets started. Star Leonardo DiCaprio is an early frontrunner for a Best Actor nomination which, if it does occur, would shockingly only be his 4th nomination. Over the course of the last 21 years, DiCaprio's career has seen several phases, from childstar to cult heartthrob to superstar to serious and respected actor. Let's take a look back at his filmmography: 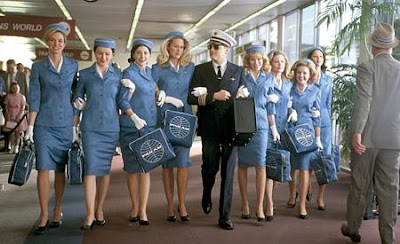 What's Eating Gilbert Grape? (1993): DiCaprio was already somewhat well-known by the time this film came out thanks to his role on TV's Growing Pains, but is almost unrecognizable as Arnie, the mentally challenged younger brother of Johnny Depp's eponymous hero. His performance in the film earned him his first Oscar nomination and truly announced him as an actor to watch out for, but it's also the sort of performance that only could have worked at that exact stage in his career. If it had come any later it probably would have been about as well received as Sean Penn's performance in I Am Sam which, although it earned the actor an Oscar nomination, also became a punchline as a self-important acting exercise.

Catch Me If You Can (2002): This is a rarity amongst DiCaprio's films in that it's one in which he gives a performance that might be described as "joyful." As conman Frank Abagnale, Jr. he moves through multiple characters within the character, using his charm, charisma and, most importantly, his intelligence to keep his game in motion. Directed by Steven Spielberg and co-starring Tom Hanks, Catch Me If You Can is escapist, but in the most serious and expertly handled way.

The Aviator (2004): DiCaprio's dynamic performance as Howard Hughes earned him his second Oscar nomination. Over the course of the film DiCaprio captures the inherent contradiction of Hughes, that he was a larger than life man who did things that drew massive amounts of attention (from his aviation career to his love life to his career as a movie mogul), but also a recluse whose phobias made it just about impossible for him to be around other people. The performance is rich and complex and though the film tends to drag a bit, DiCaprio is never less than excellent.

The Departed (2006): Arguably the best of the DiCaprio-Martin Scorsese collaborations, The Departed finds DiCaprio playing a dual role of sorts, playing a cop so deep undercover that he might never be able to get out. A genre picture of the highest order, The Departed is easily one of the finest crime thrillers to come out in the last ten years and DiCaprio's intense and layered performance is one of its many highlights.

Revolutionary Road (2008): The film which reunited DiCaprio and Kate Winslet ended up getting burried under the weight of lofty expectations when it was released theatrically, but it's a film that is deserving of critical reassessment. DiCaprio and Winslet star as a couple torn apart by disillusionment in themselves and each other after having abandoned their youthful dreams for the sake of their adult responsibilities. Both actors deliver mature, intricate performances that plumb the depths of despair and keep the film afloat even when Sam Mendes' sometimes ponderous direction threatens to sink it.

Shutter Island (2010): Another so-called "genre" film from DiCaprio and Scorsese and another highlight of their collaboration. This moody and atmospheric psychological thriller sees DiCaprio as a cop tasked with unravelling a mystery... or does it? The film has plenty of twists and turns and an ambiguous ending and DiCaprio's performance is, as usual, top notch.

Inception (2010): Arguably the movie of 2010, Incepion also has an ambiguous and much discussed ending. A technical marvel with a tightly plotted narrative, the film has plenty to recommend it even before you start discussing the performances. DiCaprio's performce as the extraction expert tortured by his past anchors the film, helping to provide it with a sense of humanity and giving the audience an emotional entry point into the story. 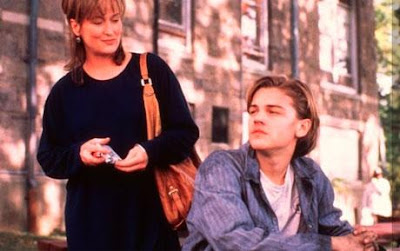 This Boy's Life (1993): Released about six months before Gilbert Grape (though not as widely seen), this was DiCaprio's breakthrough role as a serious young actor. Based on the memoir by Tobias Wolff, DiCaprio plays a young Wolff who struggles to deal with his violent and dominating stepfather. Still a teenager when he made the film, DiCaprio more than holds his own with co-stars Robert De Niro and Ellen Barkin.

The Basketball Diaries (1995): Scott Kalvert's adaptation of Jim Carroll's memoir about teen angst, heroin addiction, and basketball, is a deeply flawed film but has also become something of a cult favourite. It's also somewhat notorious for being one of the films singled out during the post-Columbine panic due to a sequence in which DiCaprio's character fantasizes about bringing a gun to school. The film is more than a little uneven, but the performances by DiCaprio and co-star Mark Wahlberg are fantastic.

Romeo + Juliet (1996): An argument could be made that Baz Luhrmann's modernized/punk version of the Shakespeare classic set the scene for the veritable tsunami of fame that swept DiCaprio up courtesy of Titanic. Playing the hero of the ultimate teen angst love story, DiCaprio (a thoroughly modern actor) is not entirely at home with the dialogue but brings a lot of passion and intensity to the role.

Marvin's Room (1996): For a film with so many stars - DiCaprio, Meryl Streep, Diane Keaton (Oscar nominated for her performance), and Robert De Niro - Marvin's Room seems to have been rather easily forgotten. It's a shame since this is a solid family drama about two estranged sisters coming together after one of them is diagnosed with leukemia. The film makes the most of the complex dynamics of its characters and its top notch cast and it holds up really well today.

Titanic (1997): The career gamechanger, Titanic made DiCaprio the most famous and sought after actor in the world. A massive success when it was released, the tide of public opinion changed on this one fairly quickly, but it's better than its now battered reputation. Sure, the epic disaster film has a fair amount of cheese ("I'm king of the world!"), but it can't be said that DiCaprio and co-star Kate Winslet don't invest themselves fully in their roles as the tragic (and now iconic) lovers.

Gangs of New York (2002): To me, Gangs is an unweildly vanity project with several isolated moments of greatness (a Scorsese film, no matter how self-indulgent, cannot be entirely devoid of cinematic value), however, I know that a lot of people would argue otherwise and classify this film as a masterpiece. Like the film itself, I find DiCaprio's performance here a bit uneven, however co-star Daniel Day-Lewis' electrifying performance may very well be worth the price of admission.

Blood Diamond (2006): An action thriller masquerading as political commentary, Blood Diamond suffers from the same affliction of several of director Edward Zwick's films - it's a film with a grand idea/important issue to explore, but it does so in a terrifically shallow way. Still, at least it's trying to say something, which is more than you can say for a lot of films these days. DiCaprio earned his third Oscar nomination for his performance and as solid as it is, it's difficult not to think that the nomination was given because The Departed felt too much like an ensemble piece to justify giving him a Lead Actor nomination for that performance. 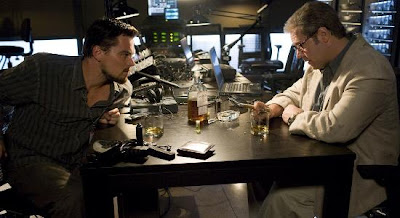 The Quick and the Dead (1995): A ridiculously silly movie, albeit a fairly entertaining one, Sam Raimi's western of female empowerment (well, sorta) stars DiCaprio as "The Kid," a fast shot with daddy issues out to prove himself. The film doesn't contain characters so much as types - Gene Hackman stars as the iron-fisted law in town, Sharon Stone is dreadfully miscast as the strong, silent Clint Eastwood-type, and Russell Crowe is featured as the man of God with a violent past - but while its waters may not run deep, it's not a bad way to spend a rainy Sunday afternoon.

Total Eclipse (1995): A now largely forgotten DiCaprio film from his pre-mainstream period. Here DiCaprio stars as poet/enfant terrible Arthur Rimbaud and, coming off the heels of The Basketball Diaries, it seems less like an opportunity for DiCaprio to stretch himself as an actor and more like an extension of his performance as Jim Carroll. Exploring the tumultuous relationship between Rimbaud and poet Paul Verlaine, the film wallows in the scandal of their lives but never really captures what made them such important figures.

The Man in the Iron Mask (1998): Based loosely on the work of Alexandre Dumas and the eponymous legend, this historical action adventure is kind of forgettable. Being DiCaprio's first post-Titanic release, it was fairly successful financially (though obviously not nearly as successful as its predecessor), but it's a plodding and generally charmless film that fails to capitalize on its assembled talent.

Celebrity (1998): All actors want to work with Woody Allen. After all, he's the man behind some of the best American comedies ever made. Unfortunately, for the better part of the last 20 years he's also been wildly inconsistent, which means that actors who sign on to work with him might end up in the next Vicky Cristina Barcelona or they might end up in the next Whatever Works. Though not out and out "bad," Celebrity is a really uneven film in which the number of things that work and the number of things that don't are just about equal.

The Beach (2000): Danny Boyle's realization of Alex Garland's novel of the same name is sort of a bridge film in terms of DiCaprio's career, joining his young heartthrob phase to his serious adult actor phase. All in all, the film is a fairly shallow adventure/utopia-gone-wrong, notable primarily for its beautiful location.

Body of Lies (2008): A fairly conventional action thriller from Ridley Scott that is perhaps a little too impressed with its own twists and turns. DiCaprio and co-star Russell Crowe deliver fine performances, but the film itself is too cookie-cutter to be of much note.

Don's Plum (2001): Since DiCaprio and Toby Maguire sued to keep this film out of exhibition in the US and Canada, I've never seen it, but it certainly sounds like a pretentious student film. Alas, I shall perhaps never know.
Posted by Norma Desmond at 8:00 AM

Hey! What about Critters 3?

A terrible oversight on my part.