Unsung Performances: Tilda Swinton in I Am Love 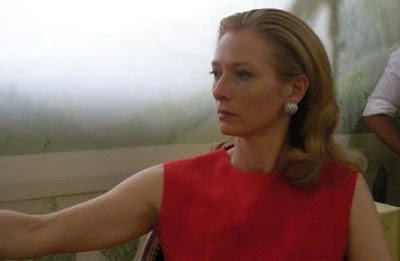 When I made my "Best of 2010" lists, Luca Guadagnino's sumptuous I Am Love came up again and again. It's a film that I admire a great deal and there's nothing I admire more about it than the central performance by Tilda Swinton. One of the most consistently great (and interesting) actors working today, Swinton never disappoints and often surprises with her ever shifting screen persona. Here she plays a much softer character than she typically does, but loses none of her usual intensity in doing so.

In I Am Love Swinton stars as Emma, the Russian-born wife of a wealthy Italian businessman. Her role within the family has been carefully managed and rigidly defined - we later learn that her name isn't even "Emma," but that that's the name her husband chose for her. She has essentially been "invented" by her husband to suit his needs and desires, stifling her own needs and desires in the process. Though her life has not necessarily been unhappy, it hasn't really been fulfilling for her to live in a family where tradition is valued over the personal needs of its members.

Emma's life is turned upside down by two people. The first is her daughter, Elisabetta, who breaks with expectation first by turning away from drawing and towards photography, and second by revealing that she's a lesbian. Her assertion of self inspires Emma to take control of her own life and identity and she begins to move away from the persona so carefully cultivated for her by her husband.

The second person who inspires Emma's change is Antonio, a friend of Emma's son with whom she begins an affair. As the film frames it (and as Swinton plays it), it isn't so much that Antonio changes Emma or that she changes for him but, rather, that being with him frees her to be the person that deep down she has always been. The relationship opens up a world of possibilities that Emma had forgotten about, as if he's walked into the room and turned on a light (there is, in fact, a scene in the film which finds Emma bathed in light as she tries a dish at Antonio's restaurant). The process that Emma undergoes is more realisation than change and as the film progresses Swinton charts Emma's rising level of consciousness.

Swinton's performance is low-key, relying on subtle shifts in her expression and bearing rather than through big speeches or scenes of scenery chewing and big emotions. Her performance is delicate and moves so naturally along with the story, that the transitions the character goes through are seamless. Though the performance is measured, I wouldn't call it restrained; it's a deeply emotional performance that hits a lot of different notes and hits them all very well. Neither the film nor the performance garnered a ton of attention last year (though the film did receive a Golden Globe nod in the Foreign Film category), but both are gems just waiting to be rediscovered and properly appreciated.
Posted by Norma Desmond at 8:00 AM