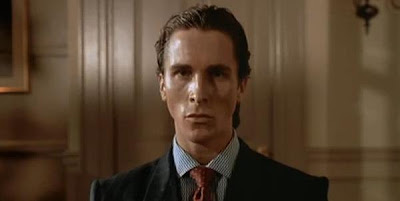 Year: 2000
Director: Mary Harron
Great Because...: It manages to be the darkest moment in a film that is dark right from the beginning. To put it simply: Patrick Bateman is a fucked up guy living a fucked up, shallow existence - one in which he will forever be trapped and which may not even exist outside of his own head. Sort of fitting, don't you think?

Patrick Bateman is everything that's wrong with his era: he's vain, materialistic, and desires nothing but status. His life is nothing but empty symbols and when his rival, Paul Allen, displays slightly more impressive status symbols (specifically his business card), Patrick gives into his darkest urges and brutally murders him. He then goes on a murderous rampage, taking out a number of people (mostly women) before things finally catch up to him and he leaves a long, desperate message for his lawyer, confessing to everything and declaring himself "a pretty sick guy."

Certain that morning will bring the punishment he deserves (and, perhaps, masochistically desires), Patrick instead finds that his confession has come to nothing. Not only does his lawyer think the confession is a joke, he has recently had lunch with Paul Allen, suggesting that the serial killing spree has merely been a figment of Patrick's sick imagination. As the film closes and he realizes that his only punishment will be continuing to live the way that he is, Patrick sums up the story's anti-moral:

"My pain is constant and sharp, and I do not hope for a better world for anyone. In fact, I want my pain to be inflicted on others. I want no one to escape. But even after admitting this, there is no catharsis; my punishment continues to elude me, and I gain no deeper knowledge of myself. No new knowledge can be extracted from my telling. This confession has meant nothing."

This deeply nihilistic ending is perfectly suited for the film that comes before it. Nothing in Patrick's life - indeed, nothing in the lives of anyone around him - matters, so why should there be any closure for him? Further, because he's so focused on empty accomplishments (such as having the most impressive business card), it's fitting that his only "true" accomplishments (the string of murders) are merely illusions, the knowledge of which leaves him more isolated and alienated from the rest of the world. His pain, such as it is, is something he will have to suffer alone and his prison will be the one in his own head, one from which he can never escape. It isn't what you can call an "uplifting" ending, but it is incredibly appropriate for the character that Patrick is. There is no meaning here, there is no meaning to him - it is nothing, which makes it perfect.
Posted by Norma Desmond at 8:00 AM