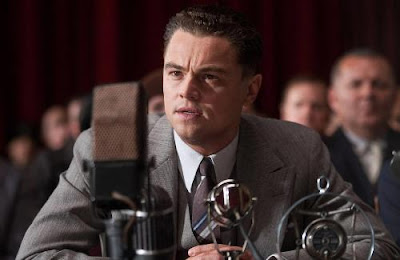 Stately and handsomely mounted but ultimately a bit empty, Clint Eastwood's J. Edgar is less a story than a survey course on a segment of American history (and enduring political gossip). It is stacked with fine performances - led by Leonardo DiCaprio as J. Edgar Hoover - but performances alone can only get you so far when the film itself succumbs to the worst habits of the biopic genre.

Written by Dustin Lance Black (who won an Oscar for Milk), the story moves back and forth between two time periods: the 1960s and early 70s, when Hoover is nearing the end of his life and writing a book that he hopes will assure his legacy, and the 1930s when Hoover and the FBI are ascendant in power. A significant portion also takes place earlier, during the politically and socially unstable period that saw Anarchist bombings and would lead to the Palmer Raids of 1919/1920, and which would put Hoover in the position to rise to significant power. This period of Hoover's life, however, is used primarily for establishing his hatred of communists, his relationship with his mother (Judi Dench), and his lifelong (platonic) relationship with Helen Gandy (Naomi Watts) who, as his secretary, is with him from the FBI's inception right up until Hoover's death and who, at one time, Hoover entertained notions of marrying.

Helen declines the marriage proposal (shocking, considering that Hoover's idea of a romantic date is taking her to the library and showing her the card catalogue system he implemented) and though Hoover later considers another woman as a potential wife, the film makes it clear that his heart belonged to Clyde Tolson (Armie Hammer), his second in command at the FBI. As envisioned by the film, the relationship between the two was devoted and emotionally intimate, but ultimately physically chaste due to the combination of the era they lived in, pressure from Hoover's mother (who tells him plainly that she would rather have a dead son than a gay son), and likely Hoover's own paranoia about evidence of a relationship with Tolson surfacing and being used against him - which is fair enough given the number of times he uses information about the sex lives of others to his own advantage. It's interesting that, in the end, the only person who is actually able to push back at Hoover and make him nervous is Richard Nixon, possibly the only contemporaneous figure who was as conservative, paranoid, and uncharismatic as himself.

As Hoover, DiCaprio delivers a restrained, but nevertheless effective, performance. The role requires that he play two layers simultaneously in that he has to project the person that Hoover wants to be in the minds of others and the man that he truly is behind the mask. Because the performance is so controlled, it might be easy to overlook the work that DiCaprio has put into it, but make no mistake: this is one of his finest performances to date. The supporting players are similarly excellent, particularly the note-perfect Watts as the loyal, but never naive, Gandy. There's a moment late in the film, when Hoover is plotting to take down Martin Luther King, Jr. and Gandy is utterly horrified by what he's come to, that is the best example of the year (so far) of actors expressing everything while saying nothing. The dynamic between Hoover and Gandy is complex as their relationship is part friendship, part partnership and, towards the end, there's a degree to which Gandy steps into the role left open by Hoover's mother (albeit as a far less domineering figure). In comparison to DiCaprio, Watts and, of course, Dench as Hoover's tiger of a mother, Hammer is a little bit out of his league but he does sell Tolson's affection for Hoover, which in turn helps humanize Hoover as a character.

The problems with J. Edgar are the problems that are common to the biopic genre. It wants to tell a sweeping and comprehensive story and it wants to do so in the context of relating the story of someone's life, which is almost impossible to do since life doesn't unfold in such a way as to make for tidy narratives. The result is that instead of telling one congent and successful story, it tells several stories that are never afforded the proper depth and attention. It does make an attempt to break out of the conventional mould by suggesting that the story, told by Hoover through a series of ghost writers, is merely a last ditch attempt at self-aggrandizement on his part rather than the literal truth, but this element is never really developed enough to be meaningful. In the end, J. Edgar is merely an adequate film made memorable by the performances at its core.
Posted by Norma Desmond at 8:00 AM

wow, i'm really sad to read all the negative reviews here. i'm still planning on seeing this though