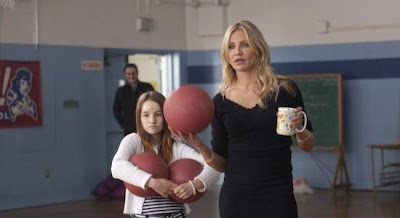 Cameron Diaz stars as Elizabeth Halsey, a middle school teacher who you might say hates teaching, except that pretty much nothing that she does actually qualifies as "teaching," so you might be opening yourself up to a semantics issue. After becoming engaged to a wealthy man Elizabeth happily gives up her job but when her fiancée realizes that she's a golddigger and tosses her out, she's forced to return to the job that she hates and try to find a new target. As the new school year begins, she quickly sets her sights on Scott (Justin Timberlake), a substitute teacher who happens to come from money, but she has competition in the form of Amy Squirrel (Lucy Punch), also a teacher and one who has as much enthusiasm for the work as Elizabeth has antipathy.

But Amy is Elizabeth's competition in more ways than just one. Having decided to get breast enhancement surgery in order to help her quest to land a rich husband, and having discovered that the teacher whose class earns the highest score on the state's standardized test will be rewarded with a $5,700 bonus, Elizabeth sets out to claim it - a goal she's unlikely to reach given both her own abilities as a teacher and the fact that Amy has won the bonus several years in a row. After making a slight effort to actually teach her class, Elizabeth instead decides to just cheat, winning the bonus but also making Amy determined to take her down and expose her as the fraud that she is.

The frustrating thing about Bad Teacher is that there are multiple occasions on which it seems like it might start to gel, but it just never does. Diaz's performance as the boozing, pot smoking, lying, thieving Elizabeth is solid, making the character likeably wretched, but the film itself is a bit of a mess. Laying aside its very skewed moral compass (Amy is annoying, but it's kind of difficult to argue that she actually deserves her fate since she's actually totally right about Elizabeth), Bad Teacher is a really shapeless film. It has the beginnings of several plot threads - Elizabeth's feud with Amy, Elizabeth's pursuit of Scott, and Elizabeth's developing relationship with Russell (Jason Segal), the gym teacher - but never really focuses on any of them and instead just jumps back and forth between them. There's no sense of narrative cohesion, which is just emphasized by the fact that Elizabeth's personal arc, such as it is, involves her suffering no consequences and learning nothing.

That being said, Bad Teacher still manages to be a pretty funny movie. The humor is fairly broad but the actors - Diaz, in particular - work well within its confines. Punch makes for a great foil for Diaz (though, as I've said, it's difficult to really see her as the "villain" the film would have you believe she is), especially as she becomes increasingly desperate to deliver Elizabeth's comeuppance. While the film itself is far from perfect and doesn't fully hold together, it does manage to deliver on laughs.
Posted by Norma Desmond at 8:00 AM