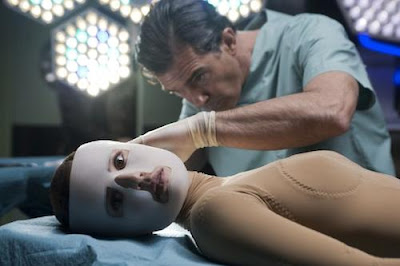 Pedro Almodovar is very good at what he does; I'd say that he's one of the most consistently excellent filmmakers working today. With The Skin I Live In he takes the admirable step of trying to branch out from familiar territory, but steps a little too tentatively and falls back a little too readily on those familiar tropes and techniques. It's still a good and often fascinating film (and beautiful looking even at its ugliest moments), but it's not quite everything that it could be.

Like many of Almodovar's films, The Skin I Live In is cut up into multiple timelines which inform each other and dovetail at the end. The present day timeline involves Robert Ledgard (Antonio Banderas), a doctor who claims that he's cultivated a special skin that can protect human beings from burns and diseases spread by insects. His research is inspired by his late wife, who died shortly after being severely burned in a car crash, and he claims that mice have been his test subjects, though in truth he's been experimenting on Vera (Elena Anaya), a woman he's kidnapped and keeps captive in his home. He's aided in his plot by Marila (Marisa Paredes), a faithful servant (with a secret; natch), however, when Marila allows her wayward son, Zeca (Roberto Alamo), into Robert's compound for a visit, he finds out about Vera and things start to go wildly off the rails.

In flashbacks the film plumbs the depths of Robert's obsession with "creating" Vera. His wife (who had run away with Zeca) was burned "to a cinder" from the car crash and though Robert was able to save her body, her psychological state remained terribly fragile and, ultimately, she was unable to cope with the physical toll the accident had on her body and committed suicide. Her suicide, in turn, undermined the psychological stability of their daughter, Norma (Blanca Suarez), who had to be institutionalized and, following a traumatic incident during a temporary release from the hospital, committed suicide herself. In the aftermath of all that, Robert focused his anger on Vincente (Jan Cornet), the young man whose actions pushed Norma over the edge, and crafted an elaborate revenge plot that allowed him to regain his lost sense of control.

The Skin I Live In is grounded in ideas of body horror, with Robert acting as a modern-day Dr. Frankenstein and Vera as his "monster," created from bits and pieces of others (though Robert denies it frequently throughout the film, other characters note the facial resemblance between Vera and Robert's late wife). Robert's gifts as a surgeon could be used for good, but instead he uses them as a means of physical and psychological warfare and, perhaps, to realize his own unconsious desires. Almodovar's films tend to be awash in sexual ambiguity/fluidity and to adopt as one of their themes the voyeuristic aspect of moviegoing. There is a scene early in The Skin I Live In where Robert watches Vera on closed circuit television as she reclines in bed and he mirrors her position on the chaise lounge at the foot of his bed. It's a brief moment but when considered in conjunction with aspects of the story that are revealed later on, it suggests that Robert is literally exploring with Vera the figurative emasculation/loss of power he felt as a result of his wife's infidelity and suicide and his inability to protect his daughter. In modifying Vera by making her skin impenetrable to wounds, he is perhaps trying to bolster the part of himself that he sees as most vulnerable or weak.

The act of watching Vera through various monitors in the house is something the film returns to often and in doing so not only asks us as an audience to empathize/identify with Vera, but also makes us complicit in Robert's crimes, which means our sense of place within the story is constantly shifting and unstable. The best horror films accomplish this (perhaps the best example of this is Psycho where our protagonist, Marion Crane, is ripped away from us early and replaced with Norman Bates) because such shifts not only draw us closer to the horror, but the uneasy feeling that the shift creates also heightens the story's intensity. Intensity is something that The Skin I Live In has in spades and the complexities of the two main characters and their relationship to each other is something that will give you a lot to think about long after the film is over.

With these elements in place, the film begins very promisingly and Banderas' performance is appropriately intense and creepy, but The Skin I Live In's weakness is, ironically, one of the strengths of so many of Almodovar's other films, which is the high melodrama that winds its way through the narrative. The power of the horror aspects ends up being somewhat watered down as a result of its uneasy marriage with the splashy, soapy elements and the film ends up feeling just a bit too superficial. It isn't a bad film by any means, but it's the sort of film that ends up being "just good" despite having had the potential to be great.
Posted by Norma Desmond at 8:00 AM