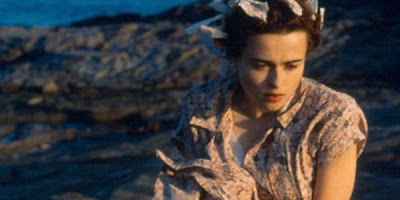 Helena Bonham Carter is like a Venn diagram that shows the intersection of classy and crazy, equally at home in fare like The King's Speech and her films with the Merchant Ivory team, and as a host of creepy and freaky characters in Tim Burton's films. In Mort Ransen's Margaret's Museum she gets to do both at once, starring in a period piece about a hardscrabble mining town which eventually leads to her going totally insane. Good times.

Based on Sheldon Currie's novel "The Glace Bay Miners' Museum," the story is set in 1940s Cape Breton and centres on Margaret MacNeil (Bonham Carter). As the film opens Margaret has already lost both her father and a brother to life in the mines and lives with her hard-hearted mother, Catherine (Kate Nelligan), and younger brother, Jimmy (Craig Olejnik). She longs to escape but instead finds love with Neil Currie (Clive Russell), a charming Scot who sweeps her off her feet. Despite Catherine's warnings that Neil, who was once a miner but got himself fired, will lead her to ruin, Margaret marries him and they settle into a happy life together.

It's not long after the marriage, however, when financial problems begin to take their toll on the relationship and force Neil to go back to the mines so that the family can stay afloat. When accidents in the mine claim the lives of Neil and Jimmy, Margaret has a mental breakdown which leads to her being locked up in an institution. Upon her release she returns to the rundown house that Neil had been fixing up prior to his death and opens a museum in honour of the miners who've been lost. It's a nice thought, except for the rather extreme way that she has chosen to comemorate her lost loved ones.

Margaret's Museum is a quirky little indie film which moves easily between humour and drama, and deftly combines the tragic love story of Margaret and Neil, with the coming-of-age story of Jimmy. Although the story ends on a note of the grotesque/fantastical, it's grounded in gritty realism that is emphasized by Ransen's no frills direction. The emphasis here is on the characters and on the little world of their community and the film makes good use of its on screen talent to bring both to life. A lot of the plot elements are a bit formulaic, but because the characters themselves are distinct enough the familiarity of the narrative never really detracts from the film itself.

The supporting performances are strong, but the film lives and dies with the performance of Bonham Carter. She perfectly captures Margaret's small community shyness but blends it with an inner strength and a certain boldness that makes her stand out as a character. A character working his or her way towards a mental breakdown can seem like an invitation to overact, but Bonham Carter never seizes the opportunity to chew scenery and instead turns inward, expressing Margaret's madness with a quiet intensity and a dark twinkle to her eye, rather than by blowing up. It's an effective, often riveting performance that goes a long way towards making the film so special.
Posted by Norma Desmond at 8:00 AM