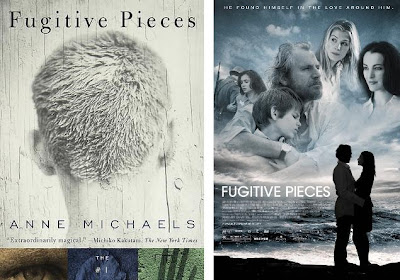 Basic Plot: After narrowly escaping from the Nazis (and watching his family be dragged off by them) in Poland, young Jacob Beaer is rescued by Athos Roussos, a Greek archaeologist who hides him for the duration of the war. Afterwards the two move to Toronto, where Jacob grows up to be a writer and is haunted by his past. He marries but the union is unsuccessful do to his inability to let go of the past and after their divorce, he finds love again but first must find a way to reconcile himself to his survivor's guilt.

Primary Differences Between Book and Film: The book is split into two parts, the first exploring the story from Jacob's perspective, the second exploring the story from the perspective of Ben, a neighbour of his whose parents survived the Holocaust. Though Ben plays a fairly significant role in the film, the film ultimately sticks with Jacob as its sole protagonist. The other big change is that by the end of the novel Jacob is dead, whereas the film ends on a much happier note, with Jacob alive and expecting a child with his second wife.

For the Book: Anne Michaels, Anne Michaels, and Anne Michaels. A celebrated poet before she wrote Fugitive Pieces, Michaels brings a lyrical quality to the story, unfolding it with vibrant, beautiful prose. Her writing style is so integral in terms of exploring the depths of the story that the film often relies on voice-over narration in order to move the story forward.

For the Film: Despite the reliance on voice-over narration (which is generally a sign of a lazy adaptation), writer/director Jeremy Podeswa does a great job at capturing the feeling of the book and translating it to the screen. The film moves gracefully, capturing the elusive and profound qualities of this story of love, loss and survival. The film is anchored by terrific performances from Stephen Dillane and Rade Serbedzija.

Winner: Draw. The film version was my favourite movie of 2008 and the book is a fantastic read. This is truly one of those rare cases where the movie lives up to the novel on which it is based.
Posted by Norma Desmond at 8:00 AM