Review: Witness For The Prosecution (1957) 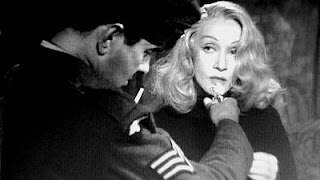 It doesn’t get much better than this: a well-constructed courtroom drama with a great twist (crafted by Agatha Christie, no less), Charles Laughton, Marlene Dietrich, and Billy Wilder. I've seen this movie a few times and each time I find myself falling in love with it all over again. It's the mark of a good mystery that even when you know the secret, you can still feel excited watching the revelation play out again.

Charles Laughton stars as Sir Wilfred Robarts, a celebrated barrister recovering from a heart attack and now saddled with a bossy nurse (Elsa Lanchester) who is determined to break him of all his bad habits and make sure that he gets the rest he needs. However no sooner is Wilfred back home than a case comes to him that proves to be irresistible: Leonard Vole (Tyrone Power) is accused of romancing and then murdering a wealthy older woman – a crime which he insists he didn’t commit. His wife (Marlene Dietrich) backs up his protestations of innocence but does so in a manner which inspires more questions than it answers. It isn’t such a great shock, then, when she turns out to be the prosecution’s surprise witness. What is shocking is what happens next, which I wouldn’t dare reveal.

The joys of this film are myriad and begin with Laughton who brings a sharp intelligence to his crusty character. Whether he’s arguing points of law in the courtroom – which, as a slight aside, occurs with refreshing frequency here; this is easily one of the more realistic courtroom dramas I’ve ever seen – or telling his nurse to “shut up,” he brings a kind of rough charm to the role. If the film consisted entirely of just one long monologue by Laughton, it would still be entirely worth watching, listening to him is that enjoyable.

The other great performance is by Dietrich who appears coolly elegant and wholly detached but is harbouring hidden depths and secrets. Mrs. Vole is a German immigrant, rescued from the post war rubble by Leonard and brought to England for a better life. I’ve long felt that Dietrich is at her best in roles like this one and those she played in Judgment At Nuremberg and A Foreign Affair, where she plays survivors of German post war reconstruction and the filmmakers allow her to hit on subtle notes of xenophobia (part of the reason Wilfred thinks she'd make a bad witness for the defense is her accent and, indeed, the courtroom audience's reaction to her adds credence to that) and misogyny. When she and Leonard meet, she’s performing in a cabaret where the soldiers treat her like she’s up for grabs and later she and Leonard make an agreement to trade coffee for sexual favour – post war reconstruction is never a good time to be a woman, but in none of these roles does Dietrich ever seem desperate. Instead she brings a strength and grace to the roles which make it clear that she’s playing women who will always find a way to survive (one of my favourite movie speeches is her “I kept going” speech from A Foreign Affair).

Laughton earned a well deserved Oscar nomination for his role, while Dietrich was passed over for her great supporting turn (a fact which was, by all accounts, quite devastating to her because she was so convinced that she would be nominated). Both actors absolutely shine, as does Lanchester in her small role. As for Power, he’s never really quite clicked for me in this role, partly because it’s hard to buy him as an Englishman when he makes absolutely no attempt to alter his very American midwest accent. For me, though, Power is the only flaw in an otherwise perfect film.