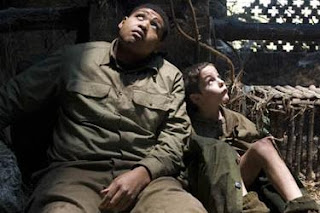 Whatever else you can say about Spike Lee, you can’t say that he’s an artist who is shy about expressing his point of view. In Miracle At St. Anna he explores the experiences of black soldiers in World War II, focusing specifically on the incongruity of asking these men to sacrifice their lives for a country which, in so many respects, doesn’t consider itself their country. One half of this movie is absolutely astounding, the other half is abysmal – it’s almost hard to believe that the whole thing comes from just one filmmaker.

It begins in New York in the 1980s with a postal worker shooting a customer. Shortly thereafter the story flashes back to Italy in 1944 when this same man, whom we learn is named Hector Negron (Laz Alonso), is preparing to cross a river to attack the Nazis on the other side. As Hector and the rest of the company - which includes Stamps (Derek Luke), Cummings (Michael Ealy), and Train (Omar Benson Miller) – prepare to cross, the Nazis blast the radio so that they’re forced to listen to Axis Sally, who asks them why they’re so eager to die for a country that treats them like second class citizens – good enough to die but not good enough to vote. Fighting on the river is fierce but the four make it across where they find themselves more or less abandoned because their white superior officer refuses to believe that they were actually able to accomplish the objective.

While the fighting is still going on Train finds Angelo (Matteo Sciabordi), a young Italian boy who is injured after the roof of a barn collapses on him. Train insists that they bring Angelo with them as they try to make their way back behind American lines and the five set off together, eventually ending up in a small village where they learn that they’re more or less surrounded by Nazis. In the village they meet a series of characters, amongst them Renata (Valentina Cervi), an Italian woman who will prove to be a source of discord between Stamps and Cummings, Peppi (Pierfrancesco Favino), a partisan known as “The Butterfly,” and Rodolfo (Sergio Albelli), a man who has a sinister connection to Angelo.

If Saving Private Ryan is the benchmark for battle scenes, Miracle At St. Anna more than lives up to that standard. The battle for the river and the fighting which will occur later through the narrow streets of the village are amongst the most visceral and finely focused that I have ever seen. Everything about these scenes is top notch and there are several quieter scenes that are just as powerful. There is a lot of debate amongst the four soldiers about why they’re there, what they’re fighting for, what they expect to get out of it when they go home. Stamps confesses to Hector that he feels more welcome in Italy than he ever has in his own hometown, and there’s a flashback in which the four soldiers are denied service in a Southern diner where no one thinks twice about serving four German POWs. There is a great deal of value in these scenes but it’s easy to lose sight of that when they’re sandwiched between scenes and plot elements that just don’t work.

At nearly 3 hours Miracle At St. Anna is bloated by too much story, too many characters, too many subplots, and too many changes in tone. There are scenes which drift unsuccessfully towards the comedic and feel like they belong in a different movie than the scenes I mentioned above. There are other scenes, specifically those which take place in the film’s present day and serve as bookends for the story proper, which are overwrought and border on maudlin. The end result is a film that seems tangled and messy and ultimately quite frustrating.

I have shockingly similar opinions to your's on this film. Great review.

Thanks. One of the things that disappointed me most about the movie was that Spike Lee spent months saying that he was going to tell a story about black soldiers' experiences in WWII and then made a movie that seems, at times, to be more about Italian partisans than the American G.I.s