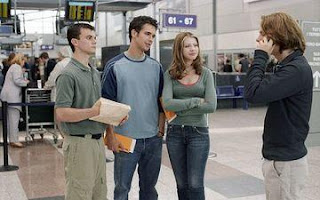 I’ll be honest: I didn’t expect to like Eurotrip. In fact, I might not even have seen it had I not stumbled across it on TV the other night and thought to myself, “Hey, that’s the LAMB's Movie of the Month, maybe I’ll give it a shot after all.” I remained wary for the first few minutes and then it happened: Matt Damon showed up and suddenly everything was okay.

Scott (Scott Mechlowicz), Cooper (Jacob Pitts), Jamie (Travis Wester) and Jenny (Michelle Trachtenberg) have just graduated from high school and Scott has been unceremoniously dumped by his girlfriend. He has a German pen pal named Mieke, which Scott believes to be German for “Mike,” who sends condolences and asks if Scott wants to arrange a meeting. Drunk and thinking that maybe Cooper was right about Mieke being an online sexual predator, Scott tells the “German freak” to leave him alone. In the morning, however, he discovers that Mieke is actually pronounced “Mika” and that she’s the buxom blond girl rather than the tall, gangly guy in the photo sent to Scott. Since Mieke has now blocked him from sending her messages, Scott (with some prompting from Cooper) decides to go to Berlin and track her down.

So that’s the set-up which leads to the following: Scott and Cooper, low on funds, agree to courier something to London as a means of getting to Europe then wander into the wrong bar and end up being adopted by a gang of soccer hooligans. In Paris they run into Jamie and Jenny, who agree to accompany them to Berlin with a few stops (both planned and unplanned) along the way which leads to a lot of drinking, sex, and one very wrong kiss.

There are a few things which ultimately won me over:

Eurotrip is a very silly movie but it’s also pretty funny and a lot less offensive than most teen sex comedies. It’s refreshingly equal opportunity in terms of nudity, eagerly showcasing both naked women and naked men, though it should be noted that the women are of the young and nubile variety while the men are of the middle-aged and saggy variety. Progress occurs in small increments. Eurotrip isn’t a great movie but I don’t think it’s aspiring to be either; I think this is exactly the movie that it wants to be so it would be difficult to argue that it isn’t successful.

Posted by Norma Desmond at 7:30 AM