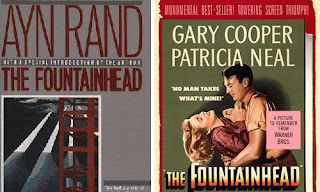 The Plot: Both book and film chart the rise of Howard Roark from obscurity and poverty to the heights of fame and adulation. Roark possess a singular and unshakeable vision which is constantly at odds with the ideas of those around him, who attempt to break him and make him compromise and conform. During his struggles he meets Dominique Francon, who believes in his vision but not in his ability to withstand all the obstacles set up against him. Her fears prove to be unfounded, though, as Roark will later make clear to the world that he would rather destroy his own creations than allow his vision to be bent to someone else’s will.

Primary Differences Between Book and Film:
The book is quite long while the film comes in at just under 2 hours, so obviously the story has been condensed considerably;
The character Peter Keating is prominent throughout the novel, his own descent serving as a parallel and contrast to Roark’s rise, but he’s barely a footnote in the film. Similarly, while Ellsworth Toohey is given a few scenes in the film, he’s a much greater presence in the book;
Roark’s early years are glossed over by the film, due I imagine to the fact that at 48, Gary Cooper couldn’t exactly pass as a young man just out of college;

For The Book: I realize that liking Ayn Rand is unpopular but… I like her. There, I said it. I’m willing to concede that she’s not the best writer, but I do think she’s a really great storyteller and I think she’s really great at clearly expressing her ideas (you might not agree with them, but you always know exactly where she stands). She’s often criticized for creating idealized, one-dimensional characters and while I think this is true of some characters, it’s unfair to say it’s true of all of them. In between Rand’s idea of the “very good” person and the “very bad” person, there are those who take some very interesting twists and turns. Gail Wynand, for example, has a fascinating arc in the book and brings about my favourite moment: Toohey’s much deserved comeuppance. Peter Keating is an interesting character as well, going from the golden boy able to coast on his knowledge that other people will help him or let him step over them, to the broken man who has what he wants (success in business) but destroys himself with the knowledge that he didn’t earn it. While the book is primarily concerned with Roark’s rise, it also compellingly charts the victories and defeats of several other people as well.

For The Film: I quite like the performance by Patricia Neal as Dominique, but there’s not a lot about the film that I would actually recommend. It’s strange to me that Rand wrote both the novel and the screenplay, because while the former consistently picks up steam throughout, the later just falls flat. The problem, I guess, is that the story is dependent on Roark to push it forward and while the Roark imagined on the page is able to do that, the Roark brought to the screen by Gary Cooper simply cannot. There’s no conviction in Cooper’s performance, which I guess isn’t surprising when you consider that Cooper admitted to not really understanding the material. For the story to work, Roark has to be able to convince the audience that he believes in the philosophy by which he lives because without that core belief, this is just an exercise in futility.

Winner: Book (by a long shot). I can’t think of a single scene which plays better on the screen than it does in the book.

indeed one hundred percent, the book is superior to the movie, we gonna take as a example the famous trilogy The Lord Of The Ring, if you read the books, you end hating the movies.